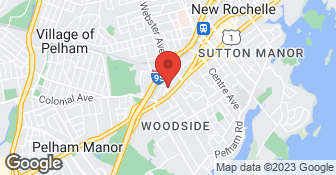 Been in business since 1973. We except Visa and Mastercard. You can speak to us regarding payment plans. We also speak Spanish and Italian....

I asked the person who said she was the owner, Gessie Tassone, to look at the wrought iron railing at my home. She sent someone who looked it over and never offered any solution, estimate or other assistance. I later found out that she was not the owner because the company had been going through financial and legal problems and was taken over by another person. Nothing was done.

Description of Work
Replacement or repair of wrought iron railing

They were recommended by a neighbor who works in the construction industry. The installation looks good and I am happy with the quality. Communication was not as strong as I would have hoped. They were a little unpredictable. A woman in the office would call in the morning to let me know if the crew planned to be there that day. When I requested a particular date, they didn't show up and wound up coming 2 days later, which was less convenient for me. However, when the work was done I was happy with it. 5 or 6 mos. later some rust and blister spots have appeared.

Description of Work
I called these folks for an estimate and spoke to a woman who took my name and number and information of what it was I wanted to have done. She told me they were busy but someone would get back to me soon. Didn't hear a thing, 3 weeks or more went by and out of the blue a number flashed on my phone with their number. Thinking it was the iron company I have hired I went to answer the call but no one was there. They had hung up. I realized it wasn't the company I hired but these people I had long forgotten about. 2 more weeks went by and their number came up again and they kept it ringing so I thought they'd leave a message. They did not. Very unprofessional, I guess it's just as well they never called back. I cannot recommend them

I told A&T Ironworks the details of a stand we needed in order to install an outdoor memorial plaque and they fulfilled it perfectly. We even wanted the plaque to end up 2 feet off the ground and displayed at a 45 degree angle. Not only did they create the custom piece for us, they even matched the paint to the green wording on the plaque. When they heard it was for a teacher that had passed away, they gave us a discount from the original quote. The only issue was the office staff - they were slow to return calls and sometimes didn't. The guys that actually designed and built the stand were very professional. It was powder-coated to withstand the weather for many year to come. They normally make fences and gates, but were more than willing to make this custom piece for us with a quick 1 week turn-around. I highly recommend them.

Description of Work
I needed a custom wrought iron stand to display an outdoor memorial plaque. A&T Ironworks was given a description of the stand, dimensions needed and the application it would be used for.

Description of Work
I needed a railing for the both sides of my front steps. I contacted A&T Iron Works in May 2010 because of their rating on Angie's List. They came to give an estimate quickly and manufactured and installed the railing on June 7, 2010.

Yery good - the job started a few weeks later than I thought it would. However, once they did get here, they did the job quickly (same day) and I am happy with it. The price was better than another place I got an estimate from.

Description of Work
Never showed up to estimate job

Description of Work
called for estimate on iron handrails

I found this company using Angies List and was glad I did. Using the yellow pages I tried contacting two companies about this job. One gave us a lower estimate verbally but then disappeared when I tried to get a written proposal. The other one was even less responsive. A third I never contacted because they lacked the county license. A & T was great to work with from start to finish. The men did a very careful job and spent a lot of time carefully touching up the new railings where needed

Description of Work
Installed about 29 feet of railing on a new flight of stairs.

The owner Gessie came out with an estimator who took field measurements. They later gave me sketches showing me how they were going to install the iron works. She also helped us decide on styles of iron works to be performed by showing us pictures of her work on other jobs. The workers came as scheduled and neatly installed the shop made iron works giving it a final paint coat on site. The iron works resembles old time craftsmens work. We were very pleased.

Description of Work
Company installed decorative detailed iron works at our home, including fencing, stair rails, gates and an arbor.

They took off my railings and reattached them so they would be much more sturdy. The final price was great but it took some negotiation.

Description of Work
They repaired my stoop railings.

WE ONLY DO INVISIBLE/ELECTRIC FENCING -- Established in 1998, we are a licensed, insured, locally owned & operated business with a focus on customer service & satisfaction. We are licensed by the States of Connecticut and New York, where we also carry full liability insurance coverage. We have the latest technology offered in our industry and are the largest Freedom Fence dealer in the United States. We will always help train your dog, to get accustom to the fencing, to put your mind at ease. Our dog, Roxy, is loved by all of our customers. Free financing is available if you qualify and we offer discounts for Angie's List members (check out our coupon offer). Give us a call for all your invisible/electric fencing needs today!  …

Rolling Stone Masonry, Ltd. in White Plains, New York, provides old world style custom stonework through our residential stone masonry services. We specialize in continuing the look and feel of classical older houses. Charlie Vaccaro established Rolling Stone Masonry, Ltd. in August 2005. Having grown up in a family of skilled construction laborers, Charlie knew that he could utilize his strong business sense in a practical way as a business owner. He began an apprenticeship in Canada in 2003 where he learned and later perfected his masonry skill. There is no one that appreciates the beauty of stonework more than this creative, artistic, and innovative businessperson does! Rolling Stone Masonry, Ltd. is knowledgeable and passionate about their service and their commitment to their customers is unsurpassed. Our honesty and integrity distinguish us from our competitors. Rolling Stone Masonry, Ltd. treats all of our clients with the respect and loyalty we feel they deserve. We handle all client inquiries and questions as if they are our own personal homework assignment. We cater to all your masonry needs including bluestone, limestone, natural stone, pavers, driveways, fireplaces, patios, staircases, walls, walkways, and all masonry repairs. We recycle our demo waste with licensed NY state recycling companies. Additional email - rollingstoneltd@optonline.net. Additional DBA - Rolling Stone Masonry.  …

How is A & T Iron Works Inc. overall rated?

A & T Iron Works Inc. is currently rated 4 overall out of 5.

What days are A & T Iron Works Inc. open?

What payment options does A & T Iron Works Inc. provide

No, A & T Iron Works Inc. does not offer free project estimates.

Are warranties offered by A & T Iron Works Inc.?

What services does A & T Iron Works Inc. offer?