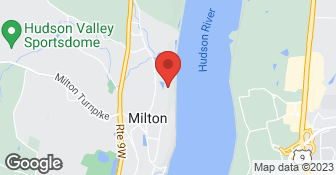 When we bought our house it had pink insulation stuffed up the chimney. We wanted to restore it to a normal, working open fireplace. I far prefer open fireplaces to inserts. Academy Fireplace had good reviews online at the time (being new to this country I did not know about Angie's list). I have since found out the good reviews were fake. Tim Doran is a smooth talking BS artist who knows how to mix just the right amount of truth with complete crap to make you believe him. He talked us into putting in a Blaze King insert. Said it would lower our heating bill and warm up the whole house. Said we would get a tax rebate on it (which we did). The reviews for Blaze Kings continue to be great! It is a great insert. The people who installed it were con artists. I was given a competitive price on the insert, and then a whole list of other costs, including $1290.00 for a top of the range, specially ordered chimney liner to protect our home from fire. I am scared shitless of dying in a fire, so I agreed, like an idiot, to a ridiculous grand total of $6005.26. We thought all went fairly well, although we didn't even use it last winter. We decided to use it this winter till a couple of weeks ago the wood would not burn and the insert kept filling the room with smoke. When I contacted Tim and asked him to come and clean the chimney for me, he said he didn't do that any more. OK... so I found another chimney sweep. When they removed the insert to clean the chimney, it was jam packed with creosote. There was no fancy pants liner, just a cheap and cheerful 6" liner from the local hardware store that had not even been attached to the back of the stove properly! Just one miserable screw stopped it from banging around in the wind. It is supposed to have a sealed connector or "component kit" for which we were charged an extra $360.00. That was nowhere to be found, so obviously loads of creosote built up in the chimney itself, to the point where it could have caught on fire and burned our house to the ground with us in it! Also, the legit chimney sweeps asked if we had the necessary permit for the insert, because they noticed our hearth was too narrow. I said, "what permit??" What do I know? I'm from South Africa where fireplaces are a barely used embellishment! Tim Doran had never informed us that we were supposed to get one, probably because he knew his work would not pass inspection. He has allegedly gone out of business and closed his bank accounts, so other customers who are trying to sue him are getting nothing. I do not know if I have any recourse. Now I have to pay more to sort out all this crap while we pay through the proverbial for oil heating. $190 for the insert permit, x amount to fix the damaged chimney (awaiting a final quote) and who knows how much to extend my hearth, just so I can have the dubious pleasure of a "safe", yet ugly wood burning insert when all I really wanted was a romantic fireplace.

Description of Work
Extremely shoddy installation of a Blaze King Princess wood burning fireplace insert and fraud (if you can call that a service - more of a shafting really).

I thought it went ok. A year or so later, I had another chimney sweep install a fireplace insert. While inspecting the chimney he explained that whoever had installed the liner had done a shoddy job. The liner itself was of poor quality and he had not added some necessary parts. (This new chimney repair company did the work almost for free as safety is utmost importance to him.) I later learned that Academy Chimney and Academy Fireplace were run by the same owner. He had changed names as so many of his customers had problems with his work. Beware of this man.

No Metal Roof Work: $500 OFF Roof Replacements for ALL Angie's List Members! See our Deals: Shingled, wood shake, and flat roofing specialists. We don't offer repairs. D M RING CONTRACTING, LLC was developed to provide the very best quality products and installation to the consumer. Our team consists of certified, highly skilled and motivated tradesmen; with core goals of ensuring a standardized and quality job is achieved every time. A wonderful experience is what we seek. When our company starts a job, it is worked at appropriate labor levels from start to finish, with no "Job Jumping" in between, satisfaction guaranteed. We have some wonderful references right down the street, who you can speak with and would welcome you to view our work.  …

Gutter Guy brings an unmatched commitment to excellence to your gutter, roofing and siding projects. We deliver unsurpassed professionalism, expertise and value.  …

Specializing in PRESSURE WASHING, WINDOW WASHING, INTERIOR AND EXTERIOR PAINTING SERVICES! We always guarantee your satisfaction and won’t leave until the job is done right. We take pride in ourselves and on the quality work we provide, while always delivering great customer service! Check out our services offered, then call --or-- click to schedule a free estimate today!  …

Bonded
Insured
All statements concerning insurance, licenses, and bonds are informational only, and are self-reported. Since insurance, licenses and bonds can expire and can be cancelled, homeowners should always check such information for themselves.To find more licensing information for your state, visit our Find Licensing Requirements page.
General Information
Free Estimates
No
Eco-Friendly Accreditations
No
Emergency Service
Yes
Warranties
Yes

How is Academy Fireplace overall rated?

Academy Fireplace is currently rated 1 overall out of 5.

What days are Academy Fireplace open?

No, Academy Fireplace does not offer free project estimates.

No, Academy Fireplace does not offer eco-friendly accreditations.

Are warranties offered by Academy Fireplace?

What services does Academy Fireplace offer?