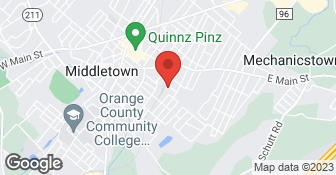 FACT: I HAVE NEVER WRITTEN A NEGATIVE REVIEW... EVER....BUT... CUSTOMERS BE INFORMED. A's Handyman ("A" aka "Anit") Accepted my job for $120. Job should have only taken him 30 min at most. HE recieved detailed information about a couch and 2 recliners (with pictures) and what needed to be done, BEFORE he contacted ME, to offer his serv0ices and accept]) the job. Simple move, no stairs either location, 2.2 miles apart for elderly couple. Day before move, he asked "would there be anyone to help him lift furniture?". Umm... "no, that's why they hired you". Then he went up on the price since the elderly customer, a stroke victim, was not helping him lift and he would have to find help. THAT SHOULD HAVE BEEN THE FIRST RED FLAG. I agreed to the raise in price for the elderly couple (which I, the seller was going to pay for out of pocket) and he "found" help exactly 1 minute later via text msg, which he apparently must have had all along as he lists he has TWO EMPLOYEES. Day of this micro move & he never showed up at the time HE set, today 2pm. RED FLAG #2 I contacted him, he responded immediately & said he would let me know once he was on his way. (So not even in the area) An hour and half later, he texted and said he ⁹was on his way and asked for clarification whether there was one piece of furniture or 3. RED FLAG #3 AGAIN I RE-SENT info confirming 3 pieces of furniture and that there was A COUCH AND TWO RECLINERS just as the original job ad had explained. Weather was iffy bc of rain so I asked if he had a tarp or covered moving vehicle, as couches & recliners were LEATHER and ELECTRIC and had originally been purchased for $6k, only to stress they shouldn't get wet. PLUS these were terms he not only accepted, but offered his services for. He explained that he didn't have enough insurance that would cover such pricey used furniture???? RED FLAG #4 (Most, if not all liability insurance coverage for even small businesses carry a customary & mandatory $1 million dollar liability limit. Perhaps, since according to his profile he has completed less than 50 jobs, he doesn't understand that he's supposed to have insurance to run a business where he is in and out of customers homes, painting, tiling, and or putting together high end play ground equipment for children (all of which were jobs he posted pictures of as being his own work). At this point in the texting he reneged on his responsibilities and I called him incompetent, which I now regret getting so upset as to call another adult a name. And I do apologize. He ended our encounter by saying HE DIDN'T WANT TO do business WITH ME! TRULY LAUGHABLE. His words Verbatim. "Thank you, come again. Very much". ???? The level of unprofessionalism and lack of common sense shown by this "business owner" was embarrassing. HE DOESN'T SEEM TO BE THE SLIGHTEST BIT DETAIL ORIENTED, WHICH COULD BE A HINDRANCE FOR HIM GOING FORWARD AND TRYING TO GROW HIS BUSINESS AND MANAGE PROJECTS. I can understand someone having an off day or three, but this was a new level of a bad day. I would not want him to lose work over this as his business seems to be in its infancy. He may be very handy with a hammer if that's what you need. But be prepared to micro manage as his skills in this area don't seem to be fully developed. I do give him props for trying to work and take odd jobs if he can't find other employment. And he seemed apologetic at times, even though he wouldn't need to be so, if he communicated with his customer instead of just ghosting, and cared about his work ethic enough to read over a job HE APPLIED FOR. I tried being understanding, bc the customer is NOT always right. I'm flexible, obviously, but this made me bend so much I almost broke. YOU'VE BEEN INFORMED.

JN Noel LLC is owner operated and focused on quality. We provide a wide range of home repair services and we're interested to hear more about your upcoming project. Please give us a call or click for an estimate today!  …

We are professional building and remodeling contractors. It would be our pleasure for us to serve you and make your home look beautiful inside and out. In process of doing that we make sure that your belongings are covered and protected. Our company is made out of reliable team members that strive to deliver perfection in every aspect and scope of the work. We are also consulting contractors which means that we are happy to help along the way in process of making all types of decisions for your project. We are also licensed and fully insured contractors. Give us a call anytime for a free consultation or estimate!  …

How is A's Handywork overall rated?

A's Handywork is currently rated 1 overall out of 5.

What days are A's Handywork open?

No, A's Handywork does not offer eco-friendly accreditations.