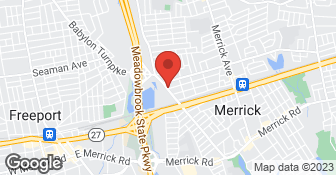 K&A Tree Service is owned & operated by Ken Zacconi who has over 13 years in this field. The company is licensed & insured. We are a full service tree company 24/7 including pruning, trimming & removing trees, we also remove stumps! We pride ourselves on our timely free estimates, job completion & cleanup! DBA- K & A Cleanup, LLC Additional Phone Number - 516-208-3131...

We offer quality and affordable landscaping and tree services. Give us a call to schedule a free estimate.  …

All Island Tree Service Corp. is one of the most reliable and professional in NY! Our goal is to ensure the service is completed safely, with little to no disruptions to your life, and most importantly guaranteeing customer satisfaction. No job is too little or too big! With our team of highly trained personnel and all the necessary equipment, we are ready to assess and undertake the work. After any service, our team makes every effort to leave the grounds clean and spotless. Call or text 516-289-8104 for a free tree removal estimate!  …

We have 20 years the experience in our job  …

This guy is terrific!!! He had done work for me a few years ago and was due to come out to remove some dead trees and do additional pruning. A couple of weeks before he was due, a gigantic tree came down, just missing my house, but blocking a good part of my home entrance. Ken returned my call that evening and came out the next day to chop away enough of the tree to give access to the door. Two weeks later, he came out with numerous workers, cut down the huge tree and did the originally scheduled work He also has relationships with additional crews who came out with machinery to remove the huge remnants of the fallen tree. Ken's price was beyond fair and his workers were respectful of my home and property. Ken made what could have been a disaster into something that was almost bearable. He was kind and responsive and I consider anyone who hires him to be in the best of hands. BTW, he went up to one of my neighbors whom I'd recommended him to and my neighbor also hired him to do work for him .

Kudos to K&A Tree Service in Merrick for removing the 70-year old giant oak tree from the front of our house and taking away our recent anxieties with every storm. Kenny and his team were punctual, professional, very efficient, neat and reasonable. Highly recommend them for all your pruning and removal needs this hurricane season and all year long!

Efficient, Skilled, Clean. These guys just know what they are doing and they do it honestly, quickly and safely. The crew seemed to always know what to do. The job was fast but complete. Left no mess - you wouldnt know they had even been there except the missing trees. I am always amazed watching these guys work. If you want a model for teamwork, it's Kenny's crew

Have used them before. Fair priced, Actually called to see if they could come early because there other job had something happen to it, worked out better for me. Were fast, efficient made sure to ask if the tall bushes I wanted cut back were to my liking. Bob who came to do the estimate was very professional as well as Kenny and his team who came to do the job. Would hire them back in a second.

Description of Work
Tress trimmed , Branches cut from neighbors tree( with their permission).

Kenny was great to work with, and his crew was quick and efficient and professional. Job was done in a short time, and I thought it was a fair price for the work involved. Would definitely hire them again.

Description of Work
Trees cleared on the back of property. Some damaged due to storm and threatening power wires.

I have used Ken's company for several different jobs over several years. One of the jobs was a very large tree that had grown at a severe angle after Sandy damage. It was hanging over the golf course fence at Eisenhower, and over my neighbors property too. Frankly, I didn't think it could be removed without damaging property other than my own. To my amazement, it was removed surgically, without damage to anything. All of the employees on any of the different jobs they have done for me are professional and respectful. In my opinion you would be foolish to call anyone else.

Ken and his crew are very professional while very quick and efficient at what they do. Arrived on a Saturday to survey the job, arrived on time the following Thursday. I recommend to everyone. After seeing the results and fair pricing, my parents used K&A to remove multiple trees. While Ken and team were there, they were able to take care of neighbors nearby too. Make sure you call Ken, thank you very much again!!!

Very well. K&A also did a few additional dead branch removals not originally priced for no extra charge once I pointed them out

Description of Work
removal of dead branches, raising a tree off roof, removing a dead tree, pulling out a small dead tree

They were very good and quick. They did the job well and I have absolutely no complaints. I would always use them from now on.

Description of Work
I had a lot of trees in my backyard so they trimmed them for me and took care of trees that were in the way of electrical lines.

Arrived as promised and went right to work. Great experience. Thank you.

Description of Work
Tree trimming was done exactly how I wanted and very responsive. Clean up at the end was stellar. Thank you!