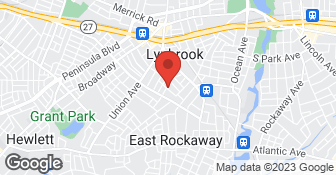 Description of Work
The estimater (Luis) came to my home on 6/20 and gave me a price to prune a large oak in the backyard. He gave me a written estimate on his letterhead for $450 to "prune large oak tree back yard. Cleanup and remove all ..(illegible)..." and said he would call me before the end of the week to confirm which day he would arrive. He never called and he never showed up. Access to the back yard could only be made on foot and requiring the tree to be climbed, necessarily eliminating the use of a cherry picker bucket . This was known by him when the estimate was submitted, and I can only assume that after speaking to his superiors it was decided that the estimate was too low. Nevertheless not calling or leaving a simple message leaving me hanging like that is totally irresponsible in my opinion.

Please read above-the guy took money for snow removal, never showed and then lied and said he would be there and never came.

Description of Work
Paid him $250 for snow removal-winter 2006-2007. Snow and ice storm-2/14/07-never came, never spread salt or sand as in contract. Storm of 3/17/2007-did not come to clean property (driveway, walk as promised). Called him-said he'd be down-never showed up. Called him an hour and a half later-first said he'd be on his way and I'm next. I asked him if he knew my address-he hung up, never came. Never removed a bit of snow as per contract. He had promised when I gave him the $250 on 12-5-06 that I would be one of the first ones to be done IF I PAID HIM IN ADVANCE-BIG MISTAKE!

Since 2019, our talented team works hard every day to provide the best services in New York. We customize our offerings based on specific needs, so get in touch today to receive an initial quote. Brighter Day Power Washing is fully insured.  …

Mancia Bros Landscaping is locally owned and operated out of Nassau county. We are specialists in removing trees due to storms or any other reason and know how to get things done safely. Our highly trained staff is timely and knowledgeable, so no need to worry. Customer satisfaction is always our priority and we make sure you're satisfied before we leave. Please call us or click for an estimate today!  …

We're a passionate and customer service oriented lawn care business. We pride ourselves in giving you quality work for a great price. Our competitors overcharge you for minimal work and bad lawncare, you don't deserve that!!. Big Ant's Landscaping offers Quality, Respect and Great Customer Service when caring and maintaining your lawn. Those factors have made us the best in our field, and it's all thanks to the incredible relationships we've formed with our clients. Unlike our competitors, we're invested in developing a personal connection with each and every one of our customers, by providing quality service and being available to you 24/7. Get in touch with us when you're ready to learn more; we can't wait to meet you. Thank you so much for your time and interest in Big Ant's Landscaping.  …

FRANK'S TREE SERVICE INC is currently rated 1 overall out of 5.

No, FRANK'S TREE SERVICE INC does not offer eco-friendly accreditations.

No, FRANK'S TREE SERVICE INC does not offer a senior discount.

No, FRANK'S TREE SERVICE INC does not offer warranties.