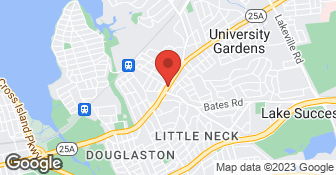 In responce to the complaint, Tiffany Shower Doors Inc. went back several times and found no problems with the function of the shower door. The customers complaint was the seals around the door which will get dirty if not properly cleaned by the customer, In our opinion a regular cleaning and maintenance should take care of the problem, which we advised the customer. To show good faith, we went back several times to change the seals. The customer did not specify reason for the complaint but after further investigation we found that the customer did not maintain the shower door.
5.0

The owner Paul Polatov came to give us an estimate for our bathroom shower enclosure. He is a very nice man who explained he could do whatever I would like in designing our new shower, which was welcome after another man said certain things couldn't be done. He answered all my questions and made some very good suggestions. I had a total of six estimates. Some price quotes were way higher (triple the price) and a couple lower or near to Tiffany. The reason I chose Tiffany was because I liked his attitude and professionalism and he is the company. He has a crew and does not subcontract out like other larger companies. Paul got back to us with a quote in a short amount of time unlike some of the others. The job was completed earlier then expected even with the approaching holiday. The two men who did the installation were professional and took care in preparing the area. We are very happy and love our new completed bathroom.

Description of Work
Installation of glass shower enclosure with door.

We ordered and had a frameless 3 sided glass shower enclosure custom made and installed to replace the "builder special" glass/brass one that the house came with. I previously used this company back in 2002 when I purchased my co-op, they installed a mirror backsplash in my kitchen and did a great job, so when in January 2012 when I purchased my hope I called them to do my shower. They werent the cheapest or the closest but since they did such great work previously. Install was done and they were neat and clean, the issues started when we used the shower. This couldnt be tested upon install, we had to wait for the seal to dry. First shower the bathroom flooded with water, called Tiffany service tech showed up and resealed around the glass, we were then informed that the shower head, which was always there was the issue. Seems that a regular shower head puts too much pressure at the door seals and hinge areas so water will leak out. We were never told this before purchase or install. Plumber changed shower head from standard to a rain shower haed that point downward. additional unexpected expense. We still had some water issues, contacted tiffany again and was told that this is the way the doors are supposed to be. I then had the Glass Shower Door company in Freeport come by, they informed me that the hinges are supposed to have plastic seals and the ones I had were trimmed/cut so thats why I was having water issues. I called Tiffany, spoke to the owner and he told me to contract with the other company for the $300 repair and that they would reimburse me. The shower now doesnt leak, but Tiffany never sent me a check. Called a few times, never got a call back. I will never use again, and didnt when I needed a 6'x9' mirror in my home installed.

Description of Work
We ordered and had a frameless 3 sided glass shower enclosure custom made and installed to replace the "builder special" glass/brass one that the house came with.

I have driven by the TIFFANY Mirror & Shower Door Showroom on Northern Blvd. in Little Neck and was always tempted to go in and see what was inside, Finally I actually did have a need for what they specialize in! I found them to be a FIRST-CLASS operation from start to finish. Paul, the owner is a true gentleman, and Brian and Jonathan, the 2 installers were absolute experts and perfectionists at their craft. There is also a wonderful young lady named Monica, that is super professional and courteous whenever I called. There prices were extremely competitive (several hundred dollars cheaper than the quote i received from the shower door company that my contractor recommended!).. I HIGHLY RECOMMEND this company!!!! My experience was absolutely perfect from start to finish and we have loved the end result day after day. P.S. We decided to go for Diamond Fusion glass and were very happy we did, also when Paul personally came to take the measurements, he was so very precise and careful, providing us with an "oversized" Custom door with superior hinges that funcions wonderfully. (and has a fantastic chrome handle too) Arthur & Lisa in Little Neck.

Description of Work
TIFFANY custom designed and installed a glass shower door in a newly renovated bathroom And it came out perfectly!!! Our bathroom had not been updated or changed since the 1950's and when we finally did a renovation, we were determined to do it right. After selecting tile from several different places, and large pieces of Emperador Marble to create a dramatic and beautiful entrance to our walk-in shower stall. We wanted a top of the line shower door worthy of the rest of the fixtures and design, and we got one! TIFFANY DID AN OUTSTANDING JOB!!!!! FIRST CLASS PROS ALL THE WAY!!! VERY HAPPY CUSTOMERS!!!

we are a family own company with 13 years of experience in the glass industry, we provide service for your home like window repair, custom shower doors, table top and much more. We also specialize in the auto glass industry, we can help you with your glass claims or schedule an appointment for glass repair o replacement .  …

Hi we have been in business since 1982 same location. We offer free estimate on windows, doors, awnings, gates,greenhouse windows, enclosures railings, windows treatment, round top doors, raidiator covers. We are a family run business given the personal touch. We can customize what other can't do.  …

We do installations of windows, screens, doors, shower doors, and glass tabletops. Installation of child guards for windows. We provide your window with a finished look by capping and installing moldings for each one. We also do window repairs such as changing balances, shoes, pins, locks, and latches. We guarantee your satisfaction, and we won’t leave until the job is done right. We pride ourselves on the quality work we provide, while delivering great customer service! Check out all the services we offer below and call -or- click to schedule an estimate today!  …

WE DON'T DO WINDOWS INSTALLATION, AUTO GLASS OR STOR FRONTS.

TIFFANY SHOWER DOORS is currently rated 3.3 overall out of 5.

No, TIFFANY SHOWER DOORS does not offer free project estimates.

No, TIFFANY SHOWER DOORS does not offer a senior discount.

No, TIFFANY SHOWER DOORS does not offer warranties.

Are there any services TIFFANY SHOWER DOORS does not offer?

WE DON'T DO WINDOWS INSTALLATION, AUTO GLASS OR STOR FRONTS.