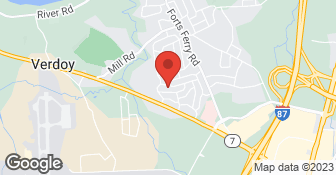 We were very happy with the two projects and would use him again for future jobs. We found him to be honest and dependable.He made great suggestions and kept us informed every step of the way. Unfortunately, we could not be available to stay home and oversee every aspect of the work, while it was being done, but felt comfortable having him in our house when we had to be at work. Most importantly, he did what he said he would do. Everyday we would go over what he planned to accomplish and at the end of the day, we would review what was accomplished, what issues came up and what the plan would be for the next day.

Description of Work
He actually did two projects for us. In the Winter/Spring of 2015, he build a full, basement bathroom. He framed the walls, installed the plumbing (including macerating pump toilet), installed a a shower and a custom vanity. Later that same year, we had him come back in and refinish the hardwood floors in our living room-dining room, which included patching a section where a wall had previously been removed. He then painted the two rooms.

BM General Contracting is currently rated 5 overall out of 5.

No, BM General Contracting does not offer eco-friendly accreditations.