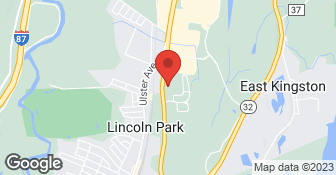 We have been in business since 1974. We offer a variety of landscaping & hardscaping services. We also operate a 6 acre retail nursery with a wide variety of selections. Finally, we grow over 100 varieties of deciduous and evergreen trees on 60 acres in the Kingston, NY area....

MFS is a full service masonry co. specializing in the creation of concrete,brick,stone and hardscape designs that enhance the appearance of homes and landscapes throughout Orange, Rockland and Bergen County. LICENSE # H-10301-20-00-00 Cell# (914)263-2358  …

Rock-n-Gardens is a family owned business, with over 30 years experience in landscaping and stonework. We specialize in natural stone patios, walkways and retaining walls, firepits and steps. But also build vegetable gardens,perennial gardens and other planting. Free estimates No creditcards  …

I found they had an excellent selection and the staff was helpful. Rather the staff were helpful if you could find them. It was somewhat difficult getting the attention of the few available. But a low level of staffing for the retail sales was the only complaint I would make. They helped me pick out two lovely trees to fit my very small yard.

Description of Work
I have not used the landscape services, only the retail plant sales.

We now have deer eaten damaged trees. The advice Augustine's gave us that the ?Green Giant? Thuja Arborvitae are deer resistant is really not the case. Augustine's representative told us now when inspecting the damaged trees their grower has eliminated the deer resistant label on the Green Giants and that there have been issues with these trees as being deer resistant. He told us now that we would have to protect them in the winter with fencing and/or constantly spray them with deer repellant, which is not what we were told when we made this purchase from Augustine's. We specifically asked them what tree was deer resistant and what they would recommend. We since have spoken to other nurseries and they all agreed that the Green Giants were not the right solution for our application for our property and that they are not deer resistant. We wanted something that was deer resistant also relatively maintenance free, and that is what Augustine's represented to us in the Green Giants after visiting our property in Woodstock. They told us that we were purchasing trees that were deer resistance and almost completely maintenance free, which apparently is not the case. We would have gone with some other solution that was deer resistant and maintenance free, but we trusted Augustine's recommendation of the Green Giants. They are all badly or partially eaten by the deer and are all unacceptable. They look terrible. We were told by the other nurseries that Privets and Forsythia would have been a much better option for us. We are very disappointed and unhappy with how this turned out. We did not get what we thought we paid for. This was a huge investment for us. Augustine's simply refused to do anything for us, even though they say they guarantee the trees for a year. Mike Augustine was also very rude to us when we tried to discuss this with him by phone. It's my opinion that they have very poor customer service skills.

Description of Work
Provided and planted 12 5ft to 6ft tall Green Giant Arborvitaes. They also came out to our property to make recommendations on the type of trees we should plant and on the location. We specifically told them that we wanted trees that the numerous deer in Woodstock would not eat. After visiting the site they recommended the Green Giant Arborvitaes. The trees were planted last May and were doing well until the deer started to devourer them.

Everything was perfect. They were quick, efficient, very nice and just did a beautiful job.

Description of Work
They planted over 33 plants and landscaped the entire front of my home.