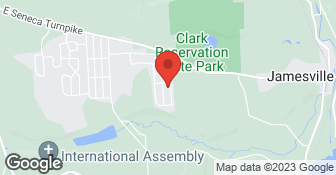 Owner operated. Cost is determined by the job. No travel charges. ...

At Reyes Painting. Our mission is simple, to provide high-quality services for our valued clients. Our goal is the satisfaction of the client in each project.  …

We have the experience and dedication to bring your dreams to reality! Specializing in interior and exterior painting; residential and commercial, wall paper removal, decorative finishes. We guarantee your satisfaction, and we won’t leave until the job is done right. We pride ourselves on the quality work we provide, while delivering great customer service! Call or click to schedule a free estimate today!  …

RACE PRO Painting is a highly skilled husband and wife owned and operated company. We have been in business for 3 years with a combined 20 years of experience. We take an extreme amount of pride in our work and never leave a job until the customer is 100 percent satisfied. Please call our office today to schedule your free estimate! 315-908-0140.  …

Dave, came out many times and we came up with a plan and price. He scheduled a start date. Out of no where he sends an email saying he is not doing the job. Would not return calls after. Very unprofessional.

David walked through the house with me on December 18 and said that it would take him a few days to get a complete estimate together for the inside of the house. He quoted $500 to cover the stain in the kitchen, move a light fixture and hang a ceiling fan, hang the microwave, and caulk the upstairs tub. He came and did the work on Dec 22. I had to ask him to come back and fix the ceiling job becau...

Initially was prompt & professional for our chimney parging job. Sadly the parging began to crack 10 short days after completion. Called Dave and was assured it would be fixed. Many phone calls, and promises - no repairs made. Thought maybe they had gone out of business. Reconnected this year when we saw DH Ferrarone on Angie's List was promised by Dave that they would "make it right". Was told re...

Awesome! HIGHLY RECOMMEND. Always on time, friendly and professional. This is concrete professional you are looking for. David did an amazing job as always. This was the third concrete/stone job he has completed at our home.

My wife and I contracted DH Ferrarone to do some foundation work on a house in Syracuse we had put on the market. David was very pleasant, and quickly put together a thorough estimate, so we put down a $2000 deposit and were told the work would start on a Monday. On the preceding Friday, we received an offer on the house and a request that no work be done. We called David and found that he was already at the house preparing to begin work, and that he had already ordered supplies. We found it odd that he would start ahead of schedule without warning us, but didn't really have a problem with it. We asked him not to do any work and offered to reimburse the supplies he had already ordered (and leave them to him). Since the contract did not say that the deposit was nonrefundable, he could simply deduct the supplies and send us the rest of our deposit back. He agreed this was fair and said he'd refund us the difference. At this point, we had a very positive impression of the company - David had been responsive and pleasant every time. After a couple of weeks without hearing from him, on November 1st 2016, I emailed to ask what the status was. He asked for my postal address so he could mail a check, and I sent him my address the same day. Two more weeks went by without any word, so I emailed again. No response. Called and left voicemail. No response. This went on for several weeks - I would attempt to communicate and get nothing but silence in return. In early December, I sent an email. Here is its exact content: "I've called and emailed several times about this and haven't heard back from you. We found you on Angie's List and contacted you because you had such great ratings. I really don't want to leave a negative review, but it's getting hard not to. You asked for my address on November 1st to send us a check, and I provided it the same day. Could you please confirm that you intend to send the check and tell us when to expect it?" After a couple more days, I called one more time in the hopes of reconciling things. David answered and proceeded to become upset, telling me I'd threatened him, that I needed to "relax," and that he had only just received the invoice from his supplier, so he could only now determine what refund we were owed and send us a check. I remained calm and professional, apologized for upsetting him, but told him I'd found the lack of communication worrying and that I didn't want to leave a bad review and would much rather resolve the situation. He told me the check would arrive before Christmas. No check has arrived. It's now the middle of March. I have sent emails at least twice and called many, many times. I always go to voicemail, I always leave a professional and courteous message, and I never get my calls returned. I've offered to have someone come pick up the check so that he wouldn't even have to mail it. I even had a relative call him five times, in case he's blocked my number. None of those calls were answered. The cost in both money and time of pursuing this legally in small claims court is not worth it, but I have no choice but to leave this review. I don't expect to ever receive the money I'm owed, but I want to make sure that no one else does business with this company without knowing what they're getting into. We have no idea what happened, but DH Ferrarone is clearly no longer a reliable contractor, and we lost two thousand dollars to find this out. We cannot recommend them to anyone else for any reason.

Did come out to inspect the work to be asset but never followed up after two weeks nothing. I called and left a voicemail to call me with a est and a week goes by and nothing back. Very unprofessional

He corrected the problem, but was expensive. I'm not sure if someone else would have charged as much, but I was able to have a fire that night.

Description of Work
I had typed in "chimney sweep" and this company came up. Come to find out, he is a contractor, NOT a CS. Please adjust your information! On another note, he did correct the problem. The wood insert didn't need to be cleaned and he diagnosed the problem AND was able to fix it. So I did like him and am glad he came.