With Angi since February 2015 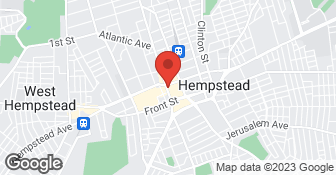 We offer pest control services in Hempstead and the surrounding areas such as Garden City, Levittown, Jamaica, Long Beach and more. We are a family-owned company known for our outstanding customer service: each associate is dedicated to the customer and exhibits integrity and respect. Our professionals offer pest control throughout Long Island New York Pest Control has been providing pest control in Hempstead and the surrounding areas for over 15 years of experience. We continue to set high standards for ourselves so that our customers receive the best possible service. Our technicians are knowledgeable of the latest in pest control techniques, which enables us to customize effective treatment plans for every situation. We are your local pest control expert We offer full service pest control and feature a variety of treatments for each situation. We offer bed bug services which include bed bug heat treatments, bed bug chemical treatments, and bed bug steam treatments. We also offer liquid and baited termite treatments. Our professionals also specialize in general pest control for ants, cockroaches, and rodents. Contact us today and learn why New York Pest Control is your local exterminator! Get your FREE pest control quote today or call 877-360-2306...

They were very good.. They did pest treatments and it was perfect. They were extremely attentive, responsive and did an excellent work.

Description of Work
They got rid of hornets.

Hello, Thank you for the kind words! We are very happy that you are satisfied with our services. Please feel free to contact us if you ever need any other services. Thank you! Kindly, Multi Pest Corp.

Not a professional service at all. I do not understand why this company received such good review. They never showed up. An appointment was made with timing. Never received a call to update me on when they would arrive. I had to call them to ask 4 times to see when they would be arriving. When it was towards the end of the day and after waiting all day for them, they wanted to reschedule the appointment after I call them again asking where they were. Never again.

I had any problems in one of my bathrooms and my boiler room. Ernesto came exactly when he said he would and walked the house with me. He told us what he would do and how much it would cost which we felt was reasonable especially when you add that he guarantees his work. He sprayed the bathroom, boiler room, and outside as well as laying granules outside and in the boiler room. He even crawled into our crawl space and treated down there as well!! He asked us twice about the kitchen (which is next to the bathroom with the issues) but we told him the kitchen was fine and told him not to treat it. That was dumb on our part because ants ended up in the kitchen 2 days after Ernesto was here. We called him to come back and we were expecting to pay again because we had told him not to do the kitchen, but he did not charge us saying it was part of the guarantee!! Ernesto is very honest, and very fair, and I would have paid for the second visit without complaint considering we did not follow his recommendation. HIRE THIS COMPANY!!

Please text or call (718) 300-5172 for free estimates or to schedule services. We're the pest control experts you can trust to take care of your home, no matter where it is in New York City and Tri-State area! Over 20 years worth of experience means we have seen just about every type or size infestation that there is. Whether its restaurants, business establishments, or homes - even those pesky insects under furniture--we've got what it takes!  …

Advance Pest Solutions is a natural pest control company with more than 10 years experience. Organic pest control methods make a lot of sense – for people and the planet. It’s no secret that heavy chemical pesticide use can be detrimental to the health of our families and pets. Nobody wants their home and yard covered with poisons! And the truth is that heavy pesticide use is not necessary to solve pest problems. That is why Advance Pest Solutions specializes in the use of low-impact and natural solutions to pest problems in your home or business. Please note- Advance Pest Control is an expert in both mosquito and tick control.  …

Multi Pest Corp is currently rated 4.6 overall out of 5.

No, Multi Pest Corp does not offer eco-friendly accreditations.

No, Multi Pest Corp does not offer warranties.