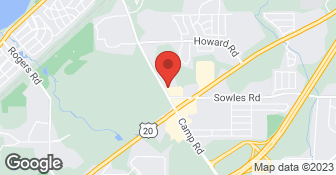 Still in the early stages, so far I am very happy with everything.Staff are very professional, answer questions & respond in a timely manner.

Completely disorganized! One hand does not know what the other is doing. I had at least 2 situations where the actual billed amount is much higher than the quote. Their prices are higher than other local pool shops, which should equate to a better service experience. Sadly, it does not. The manager does not know how to effectively deal with customer complaints. Just a tip: Grunting and sighing in response to a customer complaint is not too professional and only makes a customer angry. Save yourself some money and frustration, find another shop that will appreciate your business and respect you as a consumer.

Colley’s had put in a Pheasant’s pool. We had actually seen the pool. We called them to meet with them. He was punctual and business-like. He could not meet my all my request in line of what I wanted in my pool. So, I guess at that stand point, he was not able to hundred percent help me, but his prices were in line with the other guys. I will probably contact him again for follow-up on the quotation.

Description of Work
Colley’s Pools & Spas gave me a free estimate because we are trying to decide if we are going to put in a ground pool in the spring.

There repaired a leak in the liner which allows us to wait until next spring to replace the liner.

Description of Work
We were having problem with water leaking out of our pool and our regular pool service suggested a new liner. Cooley's came & gave estimate within 3 days of our call. I phoned back asking for service call to see if they could determine reason for extreme loss of water in pool. There did a leak check & found tear which they repaired on site. When we replace the liner next spring we will definetely consider this firm.

At first I was not happy with this company. I had contacted them in April, got an estimate in early May, and was told they couldn't come out to install the liner until late June. It seemed like they were planning on installing it way too late. My wife was due to have a baby in July and her swimming would be over for the summer after just a few weeks. However, the weather was cool and swimming would not have happened anyways, and they were also able to get the liner installed a few days earlier than they had estimated. It worked out perfectly with the weather so I got over that. Colleys sent four employees out early on June 20th, a foreman and three workers. They spent all day draining the old liner, removing it, cleaning the framing of the pool, replacing fittings, and installing the new liner. They worked efficiently, were very friendly, and got the job done. That night they had be run hose water in the pool until it got to a certain level, while shop-vacs kept the liner tight to the wall. The next day they were out again very early to install the steps. Again they were quick, cleaned everything up, and were out of there. The pool looked great and still does, and all we had to do was fill it up the rest of the way. One other hitch: I was told that I would be given a small used sand filter free of charge, but when they tested it out, it leaked. So instead they sold me a new sand filter at what I'm assuming is cost considering it was $200 less than what they have it going for in their store. No problem. It works great. All in all I would use Colley s again. I would just recommend getting your job request in very early in the season and your deposit soon after to ensure prompt service because it appears that the crew that was out to my house was THE crew. UPDATE (10/13/2015) A 4-inch portion of the liner came unsecured over the course of the liner's third summer of use. Called Colley's in late August to schedule someone to come out and fix it, but could not get an appointment until 10/13. At approximately 10 AM two technicians from Colley's showed up and I directed them to the pool. Before heading to the pool they asked me to boil water so that they could heat up the liner to stretch it easier. I went inside and put the pot on and was back outside in two minutes at which point the techs were returning from the pool. They told me they didn't need the water and the job was done already. Two minutes of labor (to say three would be generous) to reaffix a pool liner I paid them 2800 dollars to install three years ago. I was told it was not covered under warranty and was charged $119.63 for the service call. Techs told me there was nothing they could do about it, that their boss John Kibler had told them to do what they have to do to get payment. COLLEY'S CHARGED ME $119.63 FOR TWO MINUTES OF LABOR.

Description of Work
Drained a couple feet of water and much from inground pool that hadn't been used for a few years; removed old liner; scrubbed down walls and replaced fittings; installed new liner; installed new sand filter; installed existing pump. Pool is 14x28 and ranges from 3-5 feet in depth. Updated: 10/13/15 - 4 inch portion of the liner that had come unsecured was resecured

Colley's installed pool 13 years ago. After 13 years end of pool needed work. Colley's used Creative Concrete to put concrete in, they came back to finish next day, did very good job, very efficient.

Bought a house that had an above-ground pool that hadn't been opened in a number of years. We had never owned a pool before so we called Colley's to come out and open the pool for us. There was all kinds of debris and a lot of water on the cover. The service tech did not pump off any water - just dumped it all in the pool. The water level was low, so he put the garden hose in and scooped out some of the nasty dirt and leaves and then left us with the chemicals. He claimed he only had about an hour to spend on each call, so I was on my own. After more than a week of running the filter and still with muddy water, we called back and asked them to clean it since they were responsible for dumping some of the debris into the pool. The customer service rep was very helpful and offered to send the crew back to finish the job. We were not home, but they showed up the next day. Again they claimed that the water level was too low, so they turned on the hose again AND LEFT with the hose in the pool and the WATER STILL RUNNING. Luckily my wife came home on her lunch break and discovered this before the pool overflowed. When we called the office to find out what happened, the customer service rep apologized and said the techs would come back that afternoon to clean up. Instead the service tech called my wife and began berating her - telling her she didn't know what she was talking about, that she was stupid and a liar. I was furious and called him back myself. He did not apologize, but instead hung up on me. Later that day, I reached the customer service rep who again was very helpful. He tried his best to mediate the dispute and ultimately agreed to give us a full refund. His attitude was the only redeeming part of the process. The tech was completely unprofessional and his behavior was inexcusable. We would never call this company again or recommend it to anyone.

As per Member's request, I did issue a full refund for the pool opening that did not meet the customer's expectations. We at Colley's strive to satisfy every customer and will do whatever it takes to make the customer happy. Unfortunately, we did not meet the Broadwater's expectations and therefore I issued them a complete refund. On 6/5/12 Colley's went to open the Broadwater's pool that had not been open in two years. Our service technician scooped a lot of leaves and water off of the cover, but was not able to get all of the leaves off without taking the cover off. He informed the homeowner, who was at home, of this and let him know that some of the leaves would probably go into the pool. The homeowner, Member, was okay with this and the technicians continued to open the pool. Since the pool had not been operated in two years, this was not a standard pool opening. The water was very dark and it was too low to operate the equipment. Our technician did as much as he could do given the situation. Two weeks later, on 6/18/12, Member came into the store and expressed her dissatisfaction with the pool opening and stated that her pool was not clearing up. I sent the service techs back, at no charge, to add some liquid chlorine and see what the situation was. The pool was still not at operating level and therefore we could not vacuum. They added the chlorine and put in a hose to fill the pool up. Member called expressing her dissatisfaction again and demanded a refund. I apologized and agreed to refund her the money for the pool opening. I did, however, inform her what she needed to do to operate the pool. They had never had a pool before and did not realize the length of time and work required to clear up a pool that had not been used in years. Service Manager
5.0

They had all the parts I needed. That was great. Otherwise, it’s hard to find. My overall experience with them was very good. Their price was reasonable. In terms of quality, the parts still works so it’s good. In terms of responsiveness, they were quick, I mean it was at the back, they found it and I was out of there in no time. They were very good in terms of professionalism. I would use their services again in the future if needed.

Description of Work
I used the services of Colley's Pools & Spas. I bought parts from them and they were the only one who had them.