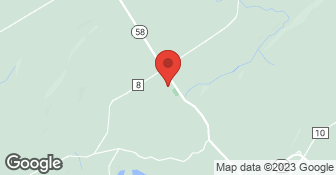 We are a 4th Generation Construction Company. Our longevity and success are a direct result of our unwavering commitment to our founding principles: quality, value, and integrity. We enjoy collaborating with clients, craftsman, designers, and architects to bring your project to life on time and within your budget, all while providing an exceptional value. Thank you for considering Van Sant Construction. Find us on Facebook under Van Sant Construction. NO JOB TOO SMALL OR TOO BIG

Brett and his crew did such an amazing job adding a room onto the back of our house. It looks like it was always there! He also did some custom work for us on the inside by building a bench with bookshelves. It turned out beautifully! We couldn’t be happier.

Very happy with everything from initial quote to completion of job. Very professional and response time was timely. I would definitely use them again.

I called Van Sant Construction today and told a Brett I had a small job for him to do for me.... mounting a small electric heater on my basement wall. He came by the same day, took a look at the job to be done, left to pick up a few supplies and was back in an hour to do the job. He was quick, professional and charged me a very reasonable rate! I would recommend him to my family and friends anytime. A very nice guy who does the job right. I highly recommend him.

We had spewing leaks and had to turn out hot water off over night. Upon morning I called every plumber in the books. Was referred to Brett and his company and I can see how true the recommendation was. He not only said I will do my best to squeeze you in, he came that afternoon and fixed our major issues on the spot. He spotted other issues that needed to be addressed and I cannot thank them enough for their service and urgency to our request. I will be using them multiple times this year for constitution and electrical work as well. I would recommend them to anyone! Very honest and hardworking!!

Description of Work
Leaking pipes and no hot water

I was in a panic when I got home from work and water was dripping from my downstairs ceiling. I called around to 6 other places and could not get anyone to come determine where the leak was coming from. They had someone to my house within hours to fix my problem. Very professional, trustworthy, knowledgeable, timely, and helpful. They know how to take care of service members and their spouses. I have recommended them to all my neighbors and coworkers. They will be my go-to for all my future needs. I cannot thank them enough!

Description of Work
Leak in ceiling

Brett and his crew did a wonderful job on our project. He and his staff treated our job as if they were working on their own homes. They were courteous and clean and best of all, stayed within the budget.

Brett was professional, friendly, and kind. He had our roof and wooden boards repaired the next morning just before the heavy thunderstorms and strong winds rolled in....just as promised. If you need work done, call Brett.

Description of Work
Some roofing/shingles needs to be replaced and wooden boards on side of balcony needed to be repaired.

Description of Work
electrical connection from house to shed

Very well, everyone was most considerate and professional. Several difficulties encountered in the process of construction because of the age and condition of my home were solved skillfully and I am very pleased with the result.

Brett and team was very professional and did a wonderful job on our remodel project which was left half done and improperly done by a prior contractor. We understood that it would be difficult for Brett to take over this project as a lot of the dimensions and leveling was off but he assured us that it will be fixed properly from the ground up. We are very pleased with his work, he also went out his way to fix a few things that we asked him for. Brett is very knowledegable in his line of work and answered any questions we had regarding costs, quality of products etc. His rates are reasonable and we would definetely hire him for future projects. Thanks again.

Thank you for your review. We appreciate your business. Please accept our sincerest thanks and gratitude for your recent renovation with us. It was truly a pleasure to serve you, as we continue to provide you with the highest level of services possible.
5.0

Went very well. Even though job turned out to be more than anticipated they were always reasonable and accommodating.

Description of Work
Roofing of residence

Basically the whole house - needed a lot of structural work to make it sound again - due to fire damage.

Description of Work
We had structural work done

It went perfectly. The interior was gutter so they were able to shim the top plate to level the roofline and re-direct the water. It made a big visual impact going from having peaks and valleys to a nice level plane across the drip edge. Part of the roof is a low pitch shed style roof. Brett tied it into the rest of the roofline in a way that made it look really nice and solid by creating a "diamond". I saved a lot of money by having him do the job. He was here remodeling so it only made sense for him to replace the roof while he was here rather than take my chances with someone else that just does roofs.

Thank you for your review. We appreciate your business. Please accept our sincerest thanks and gratitude for your recent cottage renovation with us. It was truly our pleasure to serve you, as we continue to provide you with the highest level of service possible.
5.0

After searching for quite a while, I finally found someone who had the knowledge and willingness to take on my project. We have several additions that were beyond what many contractors considered to be worth fixing. I now know that they (other contractors) were thinking of their own interests as opposed to my own, and that although complicated and tedious, it was entirely possible and cost effective to save this historic structure. It was't the easiest way to go, but in this case it turned out to be the right way. After the first two weeks I felt comfortable enough to expand the scope of the project well beyond what we had originally planned. After seeing what Brett VanSant was able to accomplish it only made sense to keep going with him and build the home I always wanted. I ended up with a MUCH nicer home for less money than what other professionals quoted me for my project. Brett not only was able to act as GC and perform most tasks himself, but was also able to shield me from lots of bad advice and sub-par work from sub-contractors and other "professionals". I give Brett VanSant and the VanSant Construction crew my full endorsement and highest recommendation. Hiring Brett was a very good decision.

Description of Work
Major remodel of a historic cottage.

Description of Work
Fast and efficient.

Description of Work
I had an expansion tank installed

Both cottages were in disrepair and our family decided to repair and insure they would survive into the future on Black Lake, NY. We observed a new roof installation on one of our neighbors cottage. Brett, the owner of VanSant Construction, gave us an estimate repair work for both cottages in the fall of 2007 which addressed our prime concerns of foundation work, new windows and vinyl siding. We began the work in May 2008 and added on new metal doors as well. More rotten wood was found than we originally suspected so that added onto the overall repair cost. At this time they both are in good condition with new foundations, replaced rotten wood, new metal windows and doors were installed. Both have been vinyl sided as well. From start to finish the three man crew worked, weather permitting, well as a team. The construction area was routinely cleaned up to keep debris from collecting. These two cottages were built from second hand materials in the 30's or 40's. Brett accepted the challenge of working with less than perfect construction material. One cottage had little studding and overall support in the front and back wall. The roof was twisting out of shape between the lack of wall support and the rotten timbers supporting one complete wall. Brett pulled the roof line back into alignment and made sure proper studding and support was put in to prevent future problems. The other cottage sits right on the water and we had always had water run down the front wall form the second story against the enclosed porch windows. The porch windows were completely rotted out. Brett suggested creating an overhang( a bump out) between the second floor and new porch windows to divert the rain away from the new windows. We just rehired Brett and his crew to perform inside finishing work inside both cottages because he has earned our trust. VanSant construction is the only repair, remodeling,reconstruction company we will hire to work on these cottages in the future. The original repair estimate was significantly less than the actual cost. We needed more raw materials to complete the job than planned for. Just like oil products, construction materials increased in cost over the six months from the estimate and actual repair time.

Description of Work
We hired Brett and his crew to repair and remodel two cottages on Black Lake, NY. This included jacking up both foundations and pouring foundations. We then had new windows and doors installed and vinyl siding installed. We also have had a new skylight installed and roof work done on one cottage. Wiring and plumbing have been re-routed and we also had inside wall board hung on previously unfinished areas in both of the cottages.

We do general contracting for all ur needs. We offer quality service at an affordable price. Contact us today about an estimate.  …

How is Vansant Construction overall rated?

Vansant Construction is currently rated 4.9 overall out of 5.

What days are Vansant Construction open?

No, Vansant Construction does not offer eco-friendly accreditations.

Are warranties offered by Vansant Construction?

What services does Vansant Construction offer?