Call 917-263-0947 today for your free estimate! We are family owned and operated for three generations and specialize in repairing or replacing flat roofs. We offer coatings and a variety of different membranes to be professionally installed. We also replace skylights, gutters, shingle roofs, and do brick work such as waterproof coatings and pointing. All our work comes with a warranty. I will come out and inspect your roof, provide you with a plan of action and a price for what needs to be done. I give you a detailed contract and depending on the job, I can usually start right then and there if your ready to get it done. No financing excepted. Deposits only taken on large jobs. Payment to be made in full upon completion of work.... 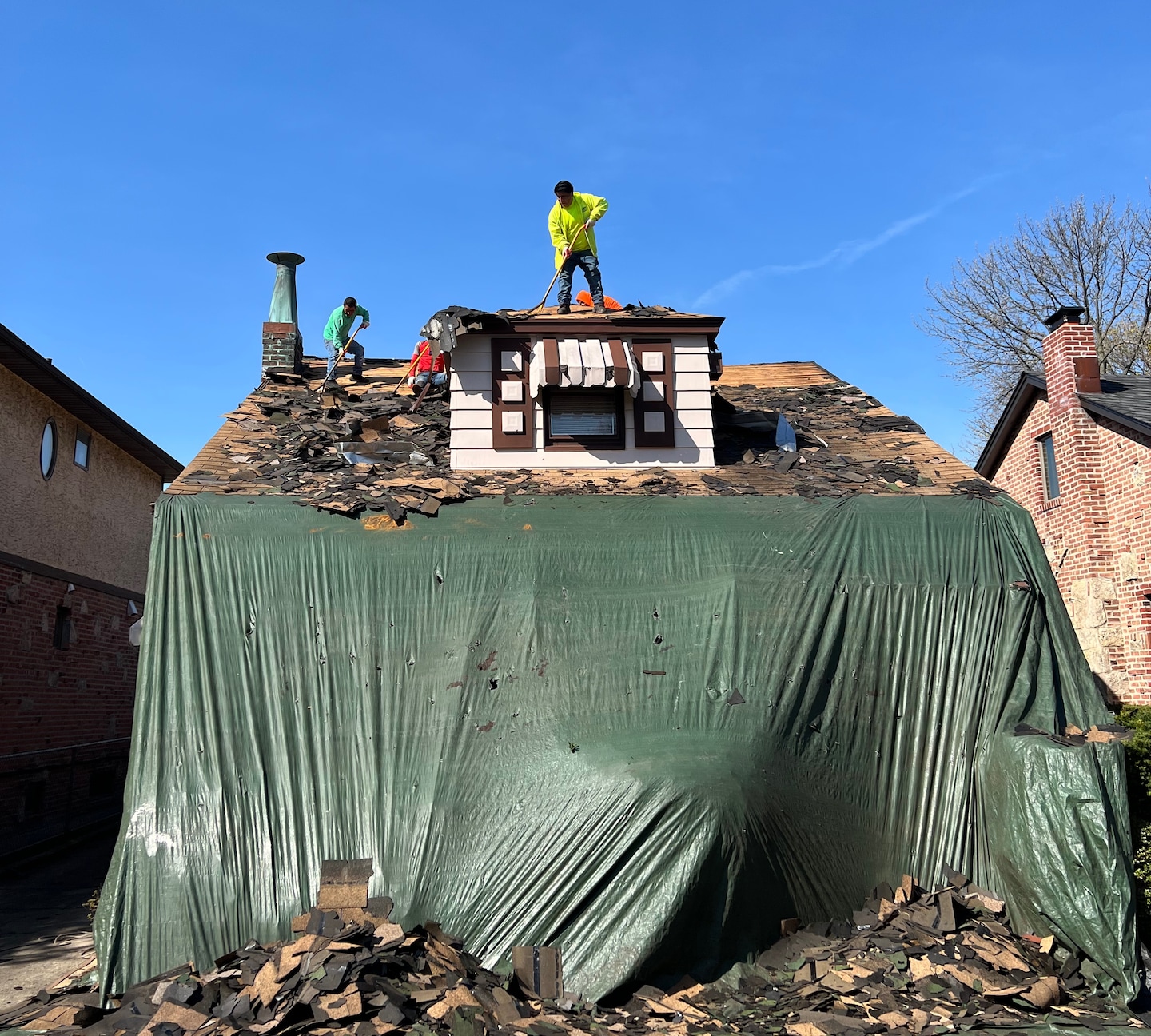 Excellent contractor. Great communication. No nonsense. Will hire again for next roofing work.

We had Bill do the flat roof repair on our parents home and a repair to the shingles and valley on our roof as well. He was very professional. He answered all our questions. He was prompt and courteous. He cleaned up everything when finished. We would highly recommend his services to anyone.

Thank you for your business, and for taking the time to leave us a review. We greatly appreciate it.
5.0

These guys can do a quality job fast. It took them 2 days to remove 6 layers of roofing material (the original 80 year old asphalt must have been there) and install the new roof. They cleaned up after themselves and took all of the garbage away on day one.

Description of Work
A new roof, gutter and skylight.

Thank you for your business, and for taking the time to leave us a review. We greatly appreciate it.
5.0

I don't think that they were that great. I was not crazy about them they supposed to guarantee it for a year or so and they could help for guarantees. They put down that they did the job last 2018 that was crazy they just here 2 months ago. I think its just for them to avoid honoring the guarantee or maybe not in any case. I have proof of payment that it was a few months ago and not in 2018. They have a form way of reacting very polite they claimed that they gave me a cheap price if they did the job I paid the $2,000.00 the highest price in the country. I have phone which I called one of their workers he said everything is fine and he came out with a prepared script that he knew by her memory. I wanted everything be fine because I have a serious problem and the problem is the same thing

Description of Work
Spring and Water proof the roof.

I will definitely work with the company again. Bill was fantastic - responsive and on time for our estimate. We felt so confident in his skill and workmanship that we hired his company on the spot to complete the (non-urgent) job the same day (we got lucky - usually they are very busy). Bill and his crew not only completed the job - but completed it carefully, paying attention to details. They definitely did not skimp on any aspect of this job - the coating is thick and the flashing looks incredibly durable. Our skylights were sealed in such a way that I'm not worried about them at all. Honestly, a great company I would work with again. Thank you!

Very professional. Checked the roof. Told me what problem was. Returned next day. Made necessary repairs. Had previous roofer who failed to come back after leaks. Have had two bad storms and NO leaks. Would definitely use again.

The roof replacement was completed on time and done in a very professional manner. They were punctual and completion was as projected. Staff were neat and respectful.

Description of Work
We had a new roof installed. The Roofing Company did an inspection from a deal purchased on this site. I decided to have the entire roof replaced.

The main reason I hired this company was to fix my leaking roof. Bill White told me I did not need a new roof and that he could repair it to stop it from leaking. He offered me a 4 year warranty on all labor & materials, so I hired him. The initial repair consisted of coating my entire roof with silver aluminum roof coating. Within the approximately two years since this work was done, my roof has leaked 3-4 times and he has had to come back to fix it. These fixes have consisted of applying black, roofing cement in multiple areas on my roof. This is not an effective way to stop leaks. The black cement attracts the heat of the sun, which is the exact opposite of the reason why roofs are coated in silver (to repel the sun). Also, the consistency of the roofing cement expands and contracts, eventually causing it to crack, letting water in. I last spoke to Bill White on 9/16/18 because my roof was leaking again. He told me there was nothing more he could do to fix my roof and that he felt the leak was coming from my chimney. Since then, I have had two Chimney Specialist companies, who both have won the Super Service award from Angie's List, look at my roof and chimney. They both said the leak is not coming from the chimney. I am very unsatisfied with the work and customer service I received from this company. For one, the leak is not fixed. Secondly, the main reason I chose this company over others was the 4 year warranty. I still have almost 2 years on the warranty, yet the company isn't honoring it. So I'm out of $4,000 and still have to pay another company to do what Bill White Roofing & Waterproofing was unable or unwilling to do.

Description of Work
I needed to have my leaking roof repaired and other waterproofing work done.

To be clear, the coating of the roof was only a fraction of the work performed at the home. Since we take pride in our work and customer satisfaction seriously we came back every time you claimed to have a leak. Even though we was showed a very dark stain (not something new) and never physically seen any water, we attempted to patch the roof multiple times. I am also a proud Super Service Award winner 3 years in a row, and believe to know my business. To say we were unable or willing to help you is just absurd, I feel you were very unfair.
5.0

Called Bill White on Thurs to look into replacing 2 skylights on roof. One was leaking so decided to replace both. Bill was able to come out same day to give estimate. Because both were standard size skylights, Bill was able to locate a supplier who had 2 available. Bill and his crew came out next day to install. They were very professional and knowledgeable. Prepped and cleaned up work site. Bill worked with me on price and we are very happy with the completed work. Would definitely recommend.

Was very responsive and respectful and was reasonable.

They showed up on time, completed job and made sure the property was cleaned up.

Description of Work
Replaced a quarter of my roof, it was leaking into my kitchen

We have a great experience with Bill White Roofing. We hired them to replace my old roof, gutters and leaders. As a smart home owner should do, I had 4 roofing estimates from different accredited contractors before choosing Bill White Roofing. Bill replied to our request in a timely fashion. He was very courteous, easy to deal with, and explained everything to our inquiries very well. At first we were skeptical when he did not return at the end of the first work day to check the work done by his crew. We did not realize that he has a lead person to oversee the work. We have an issue of a leak and that is the main reason why we replaced our old roof. On the last day of work, Bill together with his family worked with the crew to finish the job. We were more than pleased to see that they meticulously check everything and even went far and beyond their work scope. They notice a gap hidden behind our chimney and they fixed it for free. They cleaned up very well and left in perfect condition. Also, what is worth mentioning is there is no BS with Bill White. There is no hidden cost. I am so happy with my pretty roof and nicely installed gutters and leaders.

They were very prompt to respond and worked rapidly and efficiently.

The contractor (roofing company) inspected the roof and showed me the picture of the roof. They sealed the leaks. The flashing worked fine for a year.

Description of Work
Flashing of roof due to leak.

Very well, fast and efficient. They were very nice. I thought the price was on the steep side...

The men were polite and the work done was neat. However, I feel that buying vouchers in advance leaves you volunerable to price changes.

Description of Work
Initially, I paid for the $69 voucher to have two skylights sealed, although only one was leaking. Bill White showed me pictures of my skylights and advised that I change them and I agreed. He also said the new roof didn't have the silver coating on it and that he would do that as well. My biggest issue was the new price. I expected to pay more than the $69 for new skylights, but as a senior citizen on a fixed income (which I shared), I found $6,000 much more than I expected. The original bargain voucher became meaningless.

Well, job was completed in less than three hours.

Description of Work
Roof was reroof

Description of Work
Did work as per coupon details-roof inspection and sealing openings (skylight, etc.). will schedule another service in a few weeks.

Since I am not able to check the repairs on the main roof, workers provided me with cellphone photos....I will have to trust that everything that needed attention up there was taken care of. The two other surfaces I can see from windows and photos were also provided. The job took one work day - Friday, August 4th (after a terrific morning rain) 9:00am until 4:00pm, 4 workers. The two supervisors/owners came @ 9am but left them here to do the work. Workers were courteous but unable to speak any English. All gutters on the rooftops were cleaned out at this time. Owner came back on Saturday morning, August 5th to check the work and pick up his payment in full...$7,500. I received a 10 year warranty on the completely new roof and a 4-year warranty on the exterior waterproof coating in writing. I did think the price was high. Only time will tell if the cost is well-spent. For my sake, I hope so.

Description of Work
I own a 3-story wood frame house that is over 100 year+; this includes a roof on the original structure plus two extension rooftops, one on the first floor that is about 20 years old (10'X 20") and the second floor is much older. The main roof had minimal work ..mostly waterproofing and repair from weathering around the skylight and chimney. Second floor roof was also just minimal maintenance repair. The first floor extension got an entirely new roof and waterproofing sealant on the two exterior walls (only one coat)..did not finish a 5-gallon container.