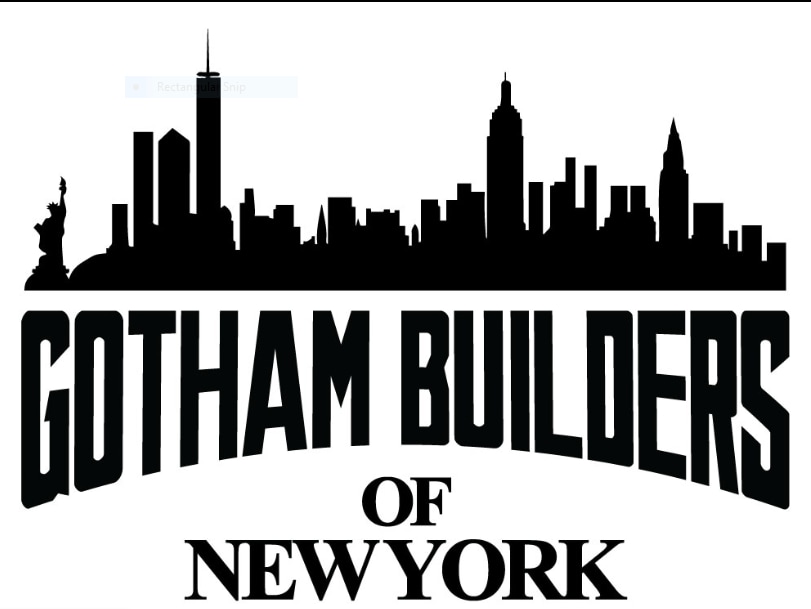 NYC & Long Island's finest home remodeling and home improvement resource. Gotham Builders has 35 years of experience in exterior and interior projects in the area. We specialize in kitchen, bathroom, basements, roofing, siding and masonry. Gotham builders will act as your adjuster. Adjusters charge you up to 10% of the claim. Gotham has adjusters on staff and will adjust your claim free of charge as long as we get the job. We want to see the insurance money go back into your home rather than the adjusters pocket. Long Island location: 108 W Merrick Rd, Freeport, NY 11520; NYC Location 203 20 Rockyhill Rd Bayside NY 11361. Associates: Gregory Perrotta, President, Kat O'shea, Project Manager. Schedule an estimate with Jackie Ardi by calling (347) 269-0048. Award winning....

The guys were great to work with. They were professional and listened to how we wanted things to look and work. Overall excellent experience.

Overall it Went well. Longer than anticipated due to product quality/delivery issues from Home Depot/Kraftmaid. The hands-on contractor that did the overall renovation/installation (Charlie) is a skilled craftsman, personable and professional.

A wonderful experience. The contractors were respectful, professional, and skilled at their craft. My 87-year-old mother had to be taken to the hospital one day by EMS workers. One of them came back to the house after they dropped my mother off to get the contractor's card - even THEY were impressed with the work they saw being done. We love our new bathrooms. THANK YOU Gotham Builders!!!

Greg and Kat were amazing. Their design recommendations where excellent and they always made sure the quality of the work is up to standard. Their team is also excellent. Will be hiring them again next time we need a job.

They are excellent, they were on time, they handled everything they cleaned up everyday and the work was done professionally. Staff are very helpful and customer service are very exceptional. They've done everything great. I will definitely call them again for any constructions works that I need.

This was a complete renovation of approximately 224 square feet of existing kitchen space- including- cabinetry- wood flooring-plumbing and electrical. Preliminarily, received excellent reviews from prior recent projects of similar size and scope. While no project is without some hiccups- Mike did an excellent job coordinating the various trades and keeping to a schedule during very difficult times. Delivery of some items not under Gotham's control namely cabinets had longer delivery production times. Mike's team as well as the sub-contractors- Plumbing-flooring and electrical were on point. Even demo was pretty clean. Everyone was neat-professional. Carpentry was perfect. What is most notable is that Mike owns the project as if it was his home. We spoke almost every single morning- project updates-addressing any questions or concerns. Always reachable- even after project closeout. There were no contractor driven change-orders and we stuck to agreed upon pricing. In fact, Mike was willing to assist me during any down time with work at my daughters newly purchased home with carpentry and the needs. If Mike, Rich and crew are on the project and his subs-you have little to be concerned about. In the end, you have a good project and have gained new friends.

These guys pulled me out of the drink. I was really suffering with a kitchen job which wasnt getting done. These guys came in and fixed a bunch of stuff and completed the install ahead of my original schedule. Very pleased.

I had the pleasure of working with Jeff W. as the GC for Gotham Builders on my construction project. After getting estimates from 4 different companies, I selected Gotham because of Jeff’s demonstration of knowledge and his professional demeanor which continued throughout the project. I had a sunroom extension and 2nd story deck above this constructed across the rear of my home. I COULDN’T BE HAPPIER WITH THE RESULT! Even though the pandemic hit during the construction, Jeff and his crews worked safely (reduced & masked man power once allowed) and got the job done in good time. Whenever there was a hiccup in the process (As we all know there will be!) Jeff was always available and communicated with me, the architect and the permit board swiftly to resolve the issues. This gave me confidence in this company’s ability to get things done. I hope to use them for a new roof in the future and have recommended them to friends and neighbors in my area.

Thank you so much. The extension came out beautiful. I love the siding and stone that you picked out. Call us if you need anything
5.0

The team of workers did an excellent job with kitchen & bath. The work was done in the exact amount of time they said. Anil was very helpful with picking the materials & design. I would definitely use them for future projects. .

Description of Work
Full gut & remodel of kitchen & half bath.

Run, don't walk to hire them. They are packing up now, Porferio and Pedro, and I miss them already. They are beautiful people and true craftsmen, a pleasure to have such skilled people in our home. They are leaving us with new windows, the biggest project we have done in our home in 20 years, and they have transformed our house. From beginning to end, they have been considerate and hardworking - they don't play. Geno, our Sales Manager, was great in helping us understand the ins and outs of his products, and checked in with us throughout the process. Ask me anything, I will tell you it was done carefully and exceptionally well. Thank you, Geno, Porferio, Pedro and Dorian. :)

Description of Work
replacement windows and installing a door

Amazing! Amazing! Gotham did a phenomenal job on our bathroom gut renovation; the end result and finish is better than I could ever have imagined. Extremely professional and knowledgeable crew and just really nice people who were able to help me get through the dysfunctional board of my building, work stoppage during the pandemic and close out of this project. I honestly have only amazing things to say about the entire crew and staff, and the quality of work that they did. Thank you all so much!

The team was professional and thorough. A camera was used to see the problem. It was explained and the live feed from the camera was shown so that I could understand the problem and how to remediate it. The project was scheduled and they complied with all the necessary permits. We no longer have the problem and are very satisfied with the work.

Description of Work
Replacement of sewage pipe. Due to erosion the pipe was sinking and was causing a problem in the basement.

Love the new look! Once the inspections were complete (the longest part of the job) the work was completed in about a week. the bathroom was completely gutted out. It was so refreshing to have everything new and modern. The workers were very efficient, ensuring to clean up every day before they left.

Gotham Builders was referred to us by Home Depot of Elmont. We specified to Home Depot that we were looking for an extremely professional, trustworthy and reliable contractor to take on this immense project. And, we got Gotham Builders!!!!! Jeff, Eddie and the rest of the team were professional from day one. They walked us through the entire process displaying their knowledge and experience in kitchen and bathroom remodels. They were punctual every single day, including weekends!!!! They were very responsive to all our questions and concerns. We were thoroughly impressed and completely satisfied with the end result. We will be using Gotham Builders again for future projects and we highly recommend that you use them too.

I recently decided to renovate my old kitchen and a friend recommended Gotham Builders on Long Island. In 2 days my kitchen was ripped out down to the studs including the ceiling. After which, new insulation, walls, ceramic floor and new ceiling fitted for recessed lighting were all installed. The project mgr, Jay Brick, was always there to see everything ran smoothly. The men were all very professional, experienced, efficient and quick. Always cleaned away all debris each day before leaving. There was a bump here and there but I was left with a beautiful kitchen. Could not be happier. Each time I enter my kitchen a big smile envelops my face. The price was fair, which included all electrical and plumbing work. All well done.

Hired Gotham to replace my roof, siding and resurfaced the chimney after comparing the price and reviews online. Although the Project didn’t finish as quickly as I expected due to rain of this year’s spring. The whole administration team were really nice and responsive from beginning to end. Special thank to Andy whom was able to accommodate all my requests and get the job done right throughout the whole process. Both my wife and I are really happy with the end result. I will definitely hire them again for any future work.

Our Church had a leak in the roof for years. Many roofers went up on the roof to try and stop. Gotham fixed the leak and put in a new bathroom. Thank Gotham

Description of Work
Roof and bathroom

Gotham is amazing. When I contacted them, I already had a preliminary design put together with another company. Thank Goodness I called Greg at Gotham. There were so many issues with that original design that I just didn't anticipate. I would have been miserable if I had gone forward with it and installed the kitchen. But Gotham came to the rescue! There is just no substitute for experience and Greg is experience defined. Also, he was as excited to do the job as I was. You can tell he loves what he does. He is creative and loves to solve problems. He would come up with ideas to make the job better and then call me to make the suggestions. Gotham's work is meticulous and I am eager to start another project with them.

To Whom it may Concern, We have looked diligently for any record or contract of the complainant's name and Brooklyn zip code. We can find no record of completing any job in the year 2019 at the stated zip code as mentioned in the complaint. On the complaint, no address number or street name was provided. We have no knowledge of this project. We ask that the complainant please contact us at our office phone number as soon as possible: 718-279-9622, press option #1. Gotham Builders of New York has been, for decades, a company proud of our attention to detail and warranty services, thus we wish to better understand the complainant's circumstances. Gotham Builders of New York 718-279-9622
5.0

Gregory and his crew provide first rate skill and quality work. It was a long process from the initial ideas to the proposed drawings, to working with the architect and selecting the cabinets and Gregory was there throughout both guiding us and making suggestions based on his experience. His crew is responsive and show care for the jobsite and making sure that the expected disruption to your home and daily life is kept to a minimum. Their taping, spackling and painting skill is top notch. I've worked with many contractors over the years and Gotham is probably the neatest to date. They made sure that the work area was cleaned and swept after each day of work. I've already used Gotham for many other projects outside of the kitchen renovation.

Gotham Builders was a pleasure to work with. They were professional, courteous, and they made sure we knew what they were doing every step of the way. They even cleaned everything when they finished. The best part was they told us it would take 2 1/2 weeks, and that is exactly how long it took. I would highly recommend Gotham Builders,