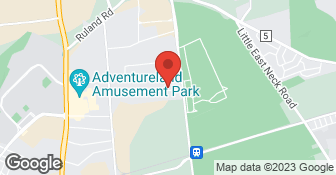 Established in 1972, All Island has been building custom designed gunite swimming pools for over forty years. Along with our Northeast awards, All Island has competed against swimming pools world wide and are proud winners of APSP international design awards. Our CBP builder certification allows us to construct any project, in any location across the entire tri-state area. Ninety percent of new projects are completed by our in house team, which allows all new construction to be completed in a timely manner. Our licensed Electricians and Plumbers are on site for all of our projects. We specializes in many energy efficient products. A pool built by All Island will run more efficiently and cost less to maintain. Our CSP certification is the highest level of service certification available in the pool industry. We field a fleet of over thirty dispatched vehicles, allowing our service technicians to get to you quickly, even during the busiest time of the year. All Island is proud to be family owned and operated....

On sprinkler turn on date, we were told the above items were broken and received an estimate. On 5/27, the appointment date, Pete came on time. He was very professional and friendly. He did a great job repairing all the above and reset my sprinkler timer.

It was horrible. They came back 3 times and on the fourth time, the problem was resolved. They were not accommodating, I'll never use them again ever and I have used them over the years but their services had been deteriorating, this time it was just horrible, his representatives were not knowledgeable. I asked them for compensate, you know like what can they do to compensate me on price or whatever 'cause they had missed a lot of work on my home repeatedly for the appointment and they weren't accommodating with anything. I don't remember when they came out, I think it's May. They turned it and then it never came on and my landscaper had told me that it needed watering because my grass started to get very dry, so I called them back so then I set the clock and I got up in the middle of the night a couple of times and I noticed that it never went on by itself, so I contacted them and they wanted to give me an appointment that was 3 weeks after they said this was a busy season and I told them I wasn't going to wait 3 weeks 'cause I waited 2 1/2 weeks for the first appointment and then I have to ask for the manager and then the manager had to call me back so I don't have access for somebody with authority. They did send somebody within that week and they send a second mission and he came and he said he's like, there's nothing wrong with it, I'll change the sensitivity of your rain sensor so he did, well I said, that means it's gonna come on when it rains, and he's like, it might but I don't know what else to do 'cause it looks like it's working so he left and then again I get to wait on odd days, the following day I put the clock for the middle of the night and still it was still not on and then I called them again and again I got a hard time and they wanted me to wait, 'cause they would say they were busy and so they send another personnel. And the person is like, I guess we have to get this right for you this time, this is a talk of our office now that we can't seem to get your sprinklers running and he wasn't professional at all. Then I didn't call anymore then my fiance called because I was really getting very frustrated so they sent another guy and the other guy was able to fix it but they never changed the rain sensors so now even when it rains, 'cause we've got a lot of rain, my sprinklers go on and I don't even want to call them to put the rain sensors back because I'm afraid that if they touch it, something's gonna go wrong so I waste a lot of water, my rain sensor is not working 'cause they set the sensitivity all the way down. I'm gonna have to look for another service, I'll pay another service to come and readjust the rain sensor because they'll set with my sprinklers going off every time it rains. To be fair, I don't know how's the comparison, I don't know how much people are charging. At the end they got a little bit like the didn't ask me to wait at the last appointment.

Description of Work
I had used All Island Irrigation. It was to turn on the sprinkler system for the season.

In late 2011, I switched to Fios service and didn't realized they had accidentally cut my sprinkler wire. In the spring, when one zoon would not work after turn on service, Pete from All Island came and rewired it. He was very professional and friendly.

Description of Work
Installed a new irrigation control wire from front valve box to the back side of the house.

THE COMPANY DID A PROFESSIONAL AND SKILLED JOB FIXING THE SPRINKLER IN MY YARD. THEY KNEW EXACTLY WHAT TO DO AND THE REPAIR WAS DONE IN A QUICK MANNER. I HAD NO OTHER PROBLEMS WITH THE SPRINKLER SYSTEM.

Description of Work
THE SPRINKLER SYSTEM WAS NOT WORKING CORRECTLY. THEY REPLACED THE TIMER, AND I HAVE HAD NO MORE PROBLEMS.

I HAD TO RESCHEDULE THE WORK TWO TIMES BECAUSE OF THE WORKERS NOT SHOWING UP. THEN THEY DID NOT BRING THE CORRECT TOOLS. THIS WAS A GREAT INCONVENIENCE TO ME, BECAUSE OF MY TIME SCHEDULE.

Description of Work
I NEEDED THE SPRINKLER REPAIRED BECAUSE THE TIMER NEEDED REPLACING.

ALL ISLAND IRRIGATION DOES A GOOD JOB. THEY ARE PROFESSIONAL AND PLEASANT TO DO BUSINESS WITH. THEY COME WHEN THEY ARE SUPPOSE TO AND THEY KEEP EVERYTHING RUNNING SMOOTHLY.

Classical Pavers serves both New Jersey and New York in the Tri-state area. We are masonry contractor company that specializes in the installation of outdoor living areas including paver driveways, walkways, patios, steps, stoops, retaining walls, culture stone, and fire pits. We are fully insured.  …

How is All Island Group overall rated?

All Island Group is currently rated 3.9 overall out of 5.

What days are All Island Group open?

All Island Group is open:

What payment options does All Island Group provide

Does All Island Group offer a senior discount?

No, All Island Group does not offer a senior discount.

Are warranties offered by All Island Group?

No, All Island Group does not offer warranties.

What services does All Island Group offer?