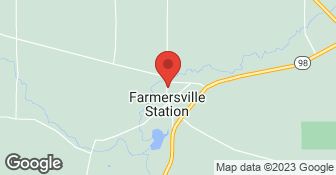 12 Years experience take cash good check card I do subcontract off of other companies...

For close to 30 years, Modern Window has been synonymous with premium, custom window solutions for Western New York and Northern Pennsylvania. When you add our ability to make yours a more eco-friendly home with the fact that we specialize in 100% American-made windows, it’s clear why this local, family-owned company has found success for so long. Call 716-873-8800 for your free, no-obligation appointment today!  …

Based on our budget we were only going to put siding on 3 sections of the house and leave 2 for the following year. Joe convinced me that it would be better to do it all at once. The siding I wanted was discontinued and he could supposedly get what was left for a discounted price. When he was finishing the work I noticed some extra boxes of siding. His crew finished up and left. He stayed to be paid. I asked if I could have the extra boxes of siding (I paid for them afterall). He said yes, but they were in the truck that the crew took. He would bring them back and drop them off. I texted him about every other week for 3 months asking when he was going to drop it off. He always had some excuse until he finally stopped responding. Only after the fact did it occur to me that I never actually found out how much the siding was and how many boxes he purchased on my dime - probably for his own project. I'm still making payments. We were capable of doing it ourselves, but didn't have time so we decided to pay to have it done and were taken advantage of. Very disappointing. If he ever brings me my leftover siding, then I will adjust my review.

Description of Work
Siding on our house

This is an update on the previous post. Joe has let us know through text that he has our extra siding but avoids any discussion about actually giving It back to us. It has been 6 months and we have been unable to finish our project. Joe Chamberlain is very disappointing and unprofessional.

Description of Work
Two types if siding on the house.

We do a lot of roofing and siding. We also build garages pole barns decks porches.Try to keep the inside work for winter unless we're building additions but am willing to work outside year round