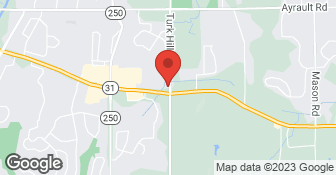 Our team has been providing professional solutions in all phases of construction for over 30 years. We are well insured and happy to help!

My initial meeting with the provider Rick was on October 7, 2015. I gave the provider a $5000.00 deposit at that time because he said he needed a deposit before they started the job. In November the provider came back to measure for the kitchen cabinets again. The drawings were so bad he had to draw them up three times. Then in December the provider came back and demanded more money for the counter tops and the cabinets, at that time I told him no that I would only pay for the cabinets totaling the balance of $4600.00. That check was cashed within an hour and a half of the provider leaving my home. The providers partner Chris Landry said they had ordered the cabinets in December and they would be installed in February. In February the provider called and delayed the job until March. Then finally Rick the man who initially came to my home in October finally told me that the cabinets were never ordered, the work was not going to be completed, and I also would not be receiving my money back.

Description of Work
I hired the contractor to order kitchen cabinets and to complete a kitchen renovation.

Great Work at a Great Price! A fresh coat of paint or stain can bring new life to rooms, add curb appeal to homes and commercial buildings, and help protect your investment for years to come. We are happy to bid on all types of painting, staining and interior design projects in the area. We will meet with you, at your convenience, and provide you with a free, written, detailed estimate – no surprise charges added after the fact. Locally owned and operated, we’re a small company with big capabilities, including interior painting, exterior painting, commercial painting, deck finishing, and interior design. .  …

Here at Trusted Gutter Solutions we look at saving and repairing all kinds of gutters. Don't wait for the winter so your gutters can fill up with ice and fall right off the house! Our dedicated team of specialists will be able to make sure that your gutters are clean, beautiful and safe all year round. We pride ourselves on how well and efficient our work gets done, every house we work on is treated like our own. With 10+ years of experience on our side you can rest assured that Trusted Gutter Solutions will have your back!  …

Family owned and operated business that started out as a part time business specializing in deck care and restoration and has grown into a full time home service firm. We have 23 years of experience in our field and take pride in our work. Punctual, courteous, neat and attention to detail are some of the ways our clients describe us. Referrals account for nearly 50% of our business and we take that very seriously. Now serving parts of Lee county in Florida for the winter months. Our services range from general handyman to bathroom remodeling. Jobs can be priced by the project or by the hour. No job is too big or small. Consultations are always free and can be worked around your schedule. When we are hired to do work, we never use subcontractors. Our name is too important for someone to tarnish it. The owner is always on the job and doesn't just send in a "crew" to complete the work.  …

We specialize in home audio video sales and installation!

How is Creative Concepts overall rated?

Creative Concepts is currently rated 1 overall out of 5.

What days are Creative Concepts open?

Are warranties offered by Creative Concepts?

No, Creative Concepts does not offer warranties.

What services does Creative Concepts offer?