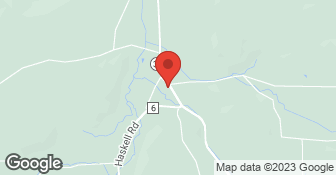 Harrington Builders is a locally owned and operated general building contractor. We will build new structures such as homes, garages, additions and pole barns or will remodel your existing home. We are also a steel and shingle roof installation company.Our service area coverage east to west is between Jamestown & Hornell and north to south from Arcade, NY to Kane, P

I called to inquire about this minor repair. I didn't need an estimate, just wanted him to do it. When I gave him my address, he asked if he had been there before. I told him he had given me a major roof project estimate a year or more ago. Since he was the high bidder, I immediately excluded him, but kept his business magnet on my refrigerator solely because he seemed to be a pleasant person. I told him not only was he not the lowest bid, but that I found out shortly afterwards that my niece's husband had done roofing in the past, and was out of work. That guy gave me a great price and did the work. I also told Matt I had kept his number and just wanted him to do the work. Matt's reply was that his policy is that if he ever gives someone a bid, and does not get the job, he will never bid on any project at that person's residence again. Whether that's a way to do business or not is not my issue. But he added, "But in this case I will make an exception." This was approximately 11:30 a.m. He said he would be over between 2 and 2:30. By 3 he had not shown. I called him again to ask if he had forgotten. He did not answer and I left a voice mail, asking him to let me know what was going on. After a while it dawned on me what he was doing. My assumption was that he was "getting back at me" for not giving him previous work. After 3:30 I once again had to call. Again he wouldn't answer and I left another message, asking him to call. He has never called back. This was an atrocious experience. His mean-spirited, vindictive and unprofessional behavior was a shock, especially to one who previously taught customer service at a local university. I will never call him again, nor recommend him to anyone. Matt also operates under the name Southern Tier Roofing.

Description of Work
The service was supposed to be a very minor leak repair on my roof. Matt Harrington did not show up for what I perceived to be a vindictive reason.

This review was a surprise to our company and I guess a little damaging as we havnt done much business through angies list. While a few things that kevin said are true, most are grossly twisted. He is correct that we bid a small roof project for him and did not get the job which is ok. And he is also correct saying that he hired a family member to do the work. The part that was left out was that after we gave him the original quote, he asked if we would do the job for cash rather than check and cut out "uncle sam" as he put it. I aid no. We are fully insured with general liability and workmans comp and thus cant afford to take such short cuts. And we also don't evade taxes. So the job went to his family. Again that is fine. But the uninsured family member he hired must not done the job correctly or why did he call me back less than a year later to fix an admitted leak? When we first bid the work I remembered that kevin was out on disability I believe and kinda felt like he might have gotten the raw deal and did agree to look at the leak. But as we were headed there I remembered the "deal" he wanted on the first job and decided that we would not get involved. I am not willing to put myself or my very good local reputation in jeopardy because someone else wants to circumvent the law. And I also should have returned his call to tell him that but he obviously figured it out. Unfortunately he felt the need to twist the story a touch. Lesson : Don't lie about someone or they might start telling the truth about you Kevin . My 300+ references speak for themselves

Cross town construction can meet all your needs big or small. We build and repair homes from the ground up. From foundations to roofs and everything in between. We strive in being the complete package to save you time and money.  …

How is Harrington Builders overall rated?

Harrington Builders is currently rated 1 overall out of 5.

What days are Harrington Builders open?

No, Harrington Builders does not offer eco-friendly accreditations.

Are warranties offered by Harrington Builders?

What services does Harrington Builders offer?