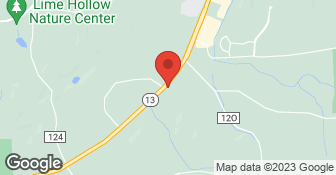 Description of Work
I Hired J.B. Smith Heating and Air Conditioning to replace a faulty furnace at my office. This was not your typical home furnace replacement because the furnace at my office is located on a mezzanine above the office. It's a small space and it's dusty. Scott Smith gave me several options for replacement of the furnace, kind of a good/better/best option. I went with the middle option. Scott ordered the materials and kept me informed via email of the estimated installation date. On the day of installation, a few workers showed up and completed the installation in a timely and neat manner. During the installation the workers even helped me take delivery of a heavy part off a tractor trailer. After the installation was completed, the workers cleaned up after themselves and answered any questions I had. | |I would hire J.B. Smith again for any heating or air conditioning needs I have.

JB Smith was recommended to me by my driveway contractor. He said, and quot;not the cheapest, but the bestand quot;. I had already gotten several quotes but decided to give them a call. Scott came promptly. He measured the living space and did a heat loss calculation to determine the size of the furnace and ducts. The ducts needed replacing because the existing furnace was ancient, inefficient, and designed to deliver much hotter air through smaller ducts that modern furnaces. The JB Smith quote was the lowest, in part because Scott determined that I did not need to add costly additional return registers. I accepted and the work was started on the day it was promised to start with a crew of 3 and was finished the next morning . The highlight of their work for me is that they responded to my concern about limited headroom in front of the stairs by changing the duct work to increase headroom without compromising the needed airflow. I'm 6'1 and didn't want to duck under ducts. At one point a duct pipe was just a little off level, not bad, good enough to pass, but their installer said, and quot;don't like it', and so he twisted and turned the joints repeatedly making it a few degrees better each twist, likewise good enough, but he didn't stop til it was perfect, and quot;professional prideand quot; he whispered. And so that's my summary, 'and quot;professional prideand quot; is worth the price.

Description of Work
They installed a new high efficiency furnace along with a complete replacement of the duct work in the basement.

Description of Work
Desperately called several people when my furnace went out during a 15 below zero cold snap, including JB Smith, and they were very friendly on the phone and said they were busy but would call me back in a while, and never returned my call at all. Luckily I was able to resolve my issue through other means. Waited all day for them to call me back... also lucky I was home on vacation at the time or else I would have missed work time.

Description of Work
They gave me an estimate to replace the propane boiler and hot water heater. The man came as scheduled and provided the estimate in a timely manner. He explained things and answered my questions thoroughly. The estimate was nearly identical to another company that was closer to my home. I chose the closer company.

The tech, Chuck, was right on time to start the installation. The water and furnace were turned off. He had the old tank out in no time and the new tank was put in place. The outlet with zone valve was cut and soldered in place, as well as the inlet piping. The rest of the plumbing to the water tank was hooked up and the wiring for the new zone valve was done next. The water and furnace was turned back on. Chuck verified that there were no leaks and that the system recognized the call for heat to the new zone. Chuck explained how the system works. I thought that everything was done in a thorough and professional manner. The work site was left in a clean state and all debris was removed. I would not hesitate to recommend Chuck and JB Smith.

The technicians were punctual, knowledgeable and friendly. The company offered several options ( new parts or new furnace ) and called with follow up information or estimation within 2 hours of initial diagnostics. When my furnace stopped working the emergency technician brought electric heaters to my house. The new furnace installation was completed in half a day.

Description of Work
I have used JB SMITH HEATING AND AIR on three separate dates within a week span. They performed diagnostics on my furnace, they came at night on an emergency call and installed.

Serving most of Central New York we are a small, newer HVAC company with years of experience in the industry. Offering competitive pricing an multiple brand options. Free estimates for all new installs.  …