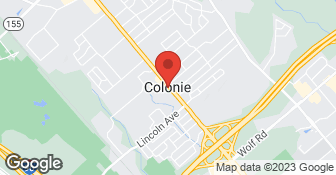 Capital Gutters proudly opened in the Albany area in 2007. Capital Gutters is a family run Business operating for over 20 years originating in Oyster Bay, Long Island in 1986. At Capital Gutters all we do is gutters and know all the in's and out's of the Gutter trade. Many companies do many other things and are "Jack of All Trades" which in our opinion waters down the end products, Where at Capital Gutters we are Jack of one Trade Gutters. Also serving Niskayuna, Rexford, Clifton Park, Ballston Lake, Ballston Spa, Malta, Saratoga, Glenville & Burnt Hill.  …

Ken is a member of the International Window Cleaning Assiciotion & Pressure Washers of North America.  …

This was a fine experience. Not a single issue. HOWEVER, for the last 5 months I have been trying to reach Dave. I have texted, called, and emailed and received no response. When I call the message says the voicemail for this number has not been set up. I don’t know how you run a business this way. Makes me wonder if he is okay! I really wanted to hire him again but now I have to look elsewhere.

I had my roof cleaned in September 2017 by Dave. I had received an estimate to have the roof of my house (mostly discoloration, some moss) and detached garage (covered in moss) cleaned. Dave responded quickly and came within 2 days of my initial request. I noticed a change in the roof of my house immediately, and saw change in the small amounts of moss over the next few weeks. I was very pleased with the roof of my house and how that was cleaned. However, I noticed no change to my garage roof. I reached out to Dave in late October to see if the garage had been missed. He responded back within 2 weeks (it was the off season) and asked that I send him a picture of the roof and told me he would take care of my roof first thing in the spring. I emailed him in early May and early June asking that he come back to wash the roof and have not heard back. I would love to be able to give a great review because I had a good experience up until this point, but I would like to receive all of the services I was promised.

David Singh contracted to soft wash the roof and he was very professional and went over and beyond in explaining ever procedure and what would be expected after treatment. I would highly recommend Rooftop Wizards.

Description of Work
Soft washed the exterior and roof of the house and shed. They covered all my plants close to the house, and they were neat and cleaned up after. Their estimate was considerably less than others, and they did an excellent job.

Thank you for your review it makes us feel good when you're happy with our work.
4.0

Thank you [Member Name] for the kind review, we work hard to make sure all of our customers are happy before during and after we work for them.