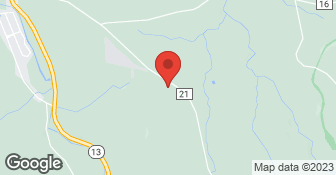 As a well known contractor for over twenty years, I have built a reputation by word of mouth. I have between three to seven employees given the workload and various specialty sub-contractors when applicable. I have a wonderful working knowledge of all aspects of contracting, from building complete homes, to additions, and remodeling I have a great working relationship with all surrounding material / lumber yeards, and specialty businesses to get what my clients are looking for....

On time. On budget.

We hired Tim Allen Co. spring of 2011 to build an addition to the back of our house. This addition included a new kitchen and office area, and total new roof. Mr Allen began working in July of 2011 and was not finished until October. He and/or his workers would be here for a day or two then not return for several days in order to work on another project. Often, he would have his young elementary age sons with him and even helping him on the roof. During the initial demolition, they failed to properly cover the framed new roof and when it rained, water came pouring into the existing house warping the floor. Tim Allen said it would dry and was not concerned. The project was not finished until October of 2011 and we remained in contact due to the buckling of the kitchen floor. Through our own research, we discovered that a kitchen island and new kitchen cabinets should not be installed on top of a floating laminate floor. This was brought to Mr. Allen's attention and he agreed he would replace the damaged area of the floor, although phone calls to him went unanswered. Then, during the next winter we discovered that water was dripping from a beam in the basement and shortly after, discovered that the water was leaking in the kitchen from where the new addition connected to the original house. Mr. Allen came out and patched the roof, told us not to touch the drywall in the kitchen to let it dry. He said he would come back after the winter and make the necessary repairs to the roof and the interior walls. Last spring we began calling Mr. Allen to schedule him returning to fix the roof, the interior water damage and the buckling kitchen floor. He did not return our calls. We have contacted an attorney and after two letters were sent to Mr. Allen, he now assumes no responsibility for the damages. I strongly discourage anyone from hiring Mr. Allen....he has our money and we have been left with a leaky roof, interior water damage, and a buckled kitchen floor. He has acted in an extremely unprofessional manner.

Description of Work
We hired Tim Allen Co. to build a 10x30 ft addition onto the back of our house.

It went great with no problems at all. Tim and the crew finished the job in good time. They were neat, the job site clean.

Description of Work
Tim and crew installed new kitchen cabinets, vinyl flooring,counter tops, appliances, and light fixture. The price did not include the purchase of the cabinets, apliances, sink or flooring.

With 9 years experience in Stucco work, our mission is to be a provider that brings back the personal touch with our customers. We will build a relationship that will last a lifetime after you see our quality work. As a locally owned and operated business we feel invested in our clients and constantly strive for customer satisfaction. We won't leave until the job is done right! Call or click to schedule an estimate today!  …

I specialize in power washing sidewalks, driveways, decks, and house siding. I also clean gutters, removing all debris that build up in them. I am an army veteran so I support the military with military discounts. Estimates vary depending on size and how much you want cleaned. For additional information, please reach me anytime at 315-506-8157  …

Hello my name is Neil with Afterglow Painting. I have 22 years of Painting experience. I will never cut corners and I will make sure your 100% happy!  …

Bonded
Insured
All statements concerning insurance, licenses, and bonds are informational only, and are self-reported. Since insurance, licenses and bonds can expire and can be cancelled, homeowners should always check such information for themselves.To find more licensing information for your state, visit our Find Licensing Requirements page.
General Information
Free Estimates
Yes
Eco-Friendly Accreditations
Yes
Payment Options
Check
Senior Discount
No
Warranties
Ask for details

I have the tools to make scaled drawings like decks.I have an architect that I have used for many years, if necessary. I also have the ability to photograph homes, render in Photoshop how your home will look with the colors you select. Siding and or color samples can be shown at your convenience.

Billing and Proposal procedures are done using Quick Books, and are on a case to case basis. Monetary draws are made as the work is preformed in stages, as agreed by homeowner. Financing is not available at this time.

Tim Allen Co. is currently rated 3.7 overall out of 5.

No, Tim Allen Co. does not offer a senior discount.

No, Tim Allen Co. does not offer warranties.

Tim Allen Co. offers the following services: I have the tools to make scaled drawings like decks.I have an architect that I have used for many years, if necessary. I also have the ability to photograph homes, render in Photoshop how your home will look with the colors you select. Siding and or color samples can be shown at your convenience.

Are there any services Tim Allen Co. does not offer?

Billing and Proposal procedures are done using Quick Books, and are on a case to case basis. Monetary draws are made as the work is preformed in stages, as agreed by homeowner. Financing is not available at this time.