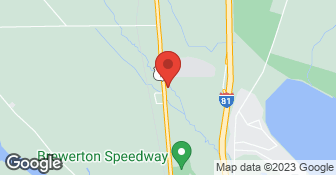 Distinctive Stone & Concrete is a family owned company with 4- 6 employees. Customer service and high quality workmanship is our number one priority. The owner of the company is on every job site and we never ask for a dime until we have started your job....

We are a team that provides services for any Business, residential or commercial properties! We get the jobs done in a timely manner.  …

We are a small business specializing in custom tile installations. We have over 20 years experience and are fully insured. We work with all forms of tile from Ceramic, to Porcelain to Natural Stone. Backsplashes, Floors and showers. You name it, we can tile it. We are an A rated BBB Accredited Company.  …

The job initially was done well and it looked beautiful. The limestone and the versalok steps have maintained their quality and durability well. However, we have had major problems after 2 winters with the stamped concrete. After the first winter, we observed several areas where it broke up and we called Tony. He was difficult to get hold of, and he finally came over and took a look at it. He said, "did you use rock salt" and I said "yes, you didn't tell me not to." He said he always recommends Ice Melt to his customers. I told him if he had, I would have purchased and used it. He power washed the broken areas and sealed them. After the second winter, during which we only used Ice Melt, almost the entire walkway was broken up It looks like someone took a jack hammer to 3/4 of the walkway; there's one section that has no damage. He came over after several calls, talked with my husband and said "this is much worse than any rock salt could have caused. Maybe when the concrete was mixed, they didn't put the right amount of air in it." He suggested adding 2 inches of concrete over the walkway, which my husband doesn't want to do, or sealing it again. He said he would provide the labor and we would have to pay for the materials. He also said he'd get back to us on cost. That was well over 2 months ago. He did not call or E-mail us with estimates. We've called his number numerous times and left messages and still haven't heard back from him. The job cost us $10,000. It's very disappointing that he is so difficult to get hold of and that we have a crappy-looking sidewalk. We'd like Tony to contact us ASAP to make an appointment to come and re-seal the walkway again.

Anthony was very responsive from initial contact through completion of project. The project was completed quickly and with very high quality. His crew is very knowledgeable and provided great suggestions to ensure the sidewalk would last many years. I highly recommend them for any concrete project.

The process went smooth. Anthony and his team were very professional from estimate to final clean up. Happy with the quality so far.

Description of Work
New Stamped Concrete in several areas and a stamped concrete overlay around our pool.

It was a pleasure to work with Tony, a contractor who returns phone calls (same day!), shows up when scheduled, is very knowledgeable & does excellent work! We love our new stamped concrete walkway! We wish they did other work as we would hire them for everything!

We recently decided to replace our aging deck with a Stamp Crete patio. After the first quote we received we decided to get another. We met with Tony Micale, the owner of Distinctive Stone & Concrete, and discussed what we had in mind and needed to provide a project that would fulfill those needs. Tony made some suggestions and we incorporated them into our ideas and decided to go forward with the project. We were impressed from start to finish with this company. They were on time, professional, neat and most importantly very knowledgeable. The project was completed on schedule. The owner was here several times during the day to check on the progress. We were impressed how his team worked together, only pros could work that way. We certainly recommend anyone needing any concrete work done to give this company a call for a quote, we are very happy we did. John and Donna North Syracuse

I called to get an estimate and the first time he said he was with his daughter at a doctors appointment and would call us back. Didn't hear anything for a couple days and called back. Told him wanted him to come out and give an estimate on replacing out front porch with stamped concrete. He said he was booked up for the year, and probably not the guy for the job . We couldn't get him to even come out and take a look so maybe we could put this off until the spring. It was obvious the job wasn't worth his time.

Description of Work
walkway and overlay

Anthony and his crew did an amazing job. We hired him to remove and replace a garage floor on a home we recently purchased. Midway through the project other pre existing issues with our home became apparent. Anthony was able to address and fix those issues and complete the garage. His team was professional, honest, courteous, and most importantly did great work. Anthony was on site and addressed all of our questions and concerns. We got several quotes and his price was very fair. We were very happy with the job his crew did and have already recommended his company to other family and friends.

Anthony and his crew transformed my house with their skillful application of fieldstone and stamped concrete. They were punctual, professional, and knowledgeable about their craft. Initially the price seemed high, but after watching the detail and skill that goes into the application, I feel I got a deal. Cleanup was completed with the same attention to detail they employed throughout the job. Very, very happy with this company.

Description of Work
Repaired entire foundation and added fieldstone there and around chimneys. Installed stamped concrete on cracked patio and other areas around house.