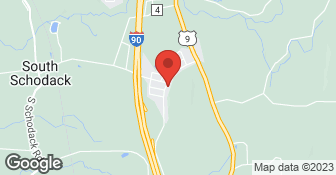 Been in business since 1990. Son Jeff started working for business in 2010. We are a full service company. I [Tom/ower] am at every job. Not only do we clean chimneys but we reline, repair, and build chimneys. We also sell and install wood stoves and fireplaces. We do all kinds of brick, block, and stone repairs. We install stainless steel lifetime chimney caps....

They are a pleasure to work with and seemed experienced and knowledgeable. The price was quite reasonable compared to some of his competitors. This was a great experience.

Description of Work
We needed a new lining and repointing on our chimney.

Description of Work
Took down old chimney to just below roof line, rebuilt and added a foot of height or so, and installed a stainless steel cap. Installed lead flashing around new chimney. Also installed stainless steel liner in chimney and connected to heating unit exhaust. All work completed in one day and as quoted. Father and son did an excellent job and I've already recommended them to a couple other people in the neighborhood.

They seemed knowledgeable, friendly and they came when they said they would. They actually gave us some decent advice and so we’re using them again. They’ll be coming in, in a couple of weeks. They wanted us to make sure that the chimney was running up and again for the year. We had a few questions for them and they answered what they could, and they admitted when they weren’t sure about an answer, which was kind of nice because they could have made something up. We’ve got this funky fan system in the house, and the house is 8 years old but it’s not that old. When we asked them about it, they said they had never seen it before. We were hoping on more information on that but we cannot do anything. Their price was fine.

Description of Work
We used them. We had just purchased a house and so they checked the chimney and then cleaned it.

Went well. He informed us that the chimneys have never been used and we're safe to use.

Description of Work
Inspected chimneys in a recently purchased home

All very smooth. Tom responded quickly, we scheduled the service. He called on the day to say he was running approximately 15 min behind - which I appreciated. Came in, put down tarps, finished the job, everything was clean as can be.

It went well. We decided to have him come by and put a new liner in as well as purchased a wood stove with installation and flooring. He will be doing the install this week. To be honest, we might have been able to find someone less expensive but we were impressed by his knowledge and his patience that we decided to stick with him. Cheaper isn't always better!

Description of Work
Tom was recommended through a friend as we needed a chimney cleaned as well as a wood stove. He came by and cleaned one chimney (we had two but he said the other was fine so it didn't need any work done). After the cleaning it was discovered that the third chimney that was linked to the furnace needed a new liner. We discussed our options (we also discussed the option of a fireplace insert.

Tom and his son arrived and immediately put down tarps and covered their shoes. I answered a couple of questions regarding the woodstove insert. They then cleaned the chimney and woodstove (including removing a dead bat from the chimney). They cleaned up completely. The job was done within an hour. I'm very pleased with their work and will definitely use them again.

Description of Work
Tom and his son cleaned my chimney and woodstove insert.

Tom is the best, very professional.

IT WAS EXCELLENT. TOM IS A VERY NICE GUY AND DID A VERY NICE JOB WITH THE CHIMNEY. EVERYONE WANTED TO KNOW WHO DID THE WORK BECAUSE IT LOOKED VERY NICE.

Description of Work
THEY SWEPT THE CHIMNEY, RE-BRICKED THE TOP SEVERAL LAYERS AND PUT A CHIMNEY CAP ON.

If the stone work around your home is damaged or worn-out, you could be on your way to a major repair. Some of easiest small problems to fix, leaks, cracks, and small separations, can lead to severe damage and an empty wallet. The team at Bill Miles Custom Masonry & Repair can help you diagnose and repair these problems while they're small, saving you a lot of money! All types of masonry structures built and maintained We work with every type of masonry construction. Whether you need help with your chimney, or are interested in a new stone walkway, you can count on our skilled team of masons to get the job done. We don't believe in quick fixes, and want to make sure that the work we do will be standing for generations to come.  …

Specializing in concrete! We always guarantee your satisfaction and won’t leave until the job is done right. We take pride in ourselves and on the quality work we provide, while always delivering great customer service! Check out our services offered, then call --or-- click to schedule a free estimate today!  …

Specializing in remodels and home building! We always guarantee your satisfaction and won’t leave until the job is done right. We take pride in ourselves and on the quality work we provide, while always delivering great customer service! Check out our services offered, then call --or-- click to schedule a free estimate today!  …

Country Sweeps Chimney Service is currently rated 5 overall out of 5.

No, Country Sweeps Chimney Service does not offer warranties.