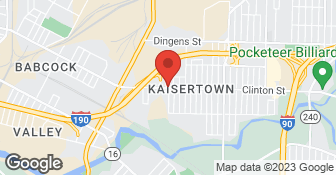 The actual repait was completed correctly. The shower doesn not leak anymore. However, when the plumber came to look at the shower, he said he needed to order a part. After we didn't hear from him for 10 days, we had to call to see if the part had come in. When he came to fix the shower, he dropped his wrench and chipped the tub. We mentioned something when we head the loud bang, but he took no responsibility for the damage. We the manager of the company the next day and he said the plumber he sent to our house didn't damage anything. In addition, he never sent us a bill until 5 weeks later. The bill stated "Waited & listened long to your B-S complaints - If payment is not received in 5 days - this acc't plus expenses will be turned over for collection - "

Zinzola Plumbing was very good. I thought that their estimate was very fair. We felt that they were very honest with us. They told us what we could do to save ourselves some money. They were very neat.

Description of Work
We had a problem with our main sewer line. The trap wasn't working on the pipes, so Zinzola came in and put a new valve in to replace the broken one.

T-Mark Plumbing, Heating & Cooling is WNY's largest family owned and operated contractor. We offer quality service, affordable prices, and an unparalleled commitment to customer satisfaction. We strive to exceed your expectations and bring you all of our services at a great price. We are Western New York born and raised, and we proudly offer our services to all of Erie county and southern Niagara county. We offer an extremely diligent, hardworking and FAST Rapid Rooter Service. We have the knowledge and experience to help you out with your sewer. Bottom line: we will get your sewer unplugged. We have a great team. T-Mark is family owned and operated and all our technicians are drug tested, background checked, and just genuine nice people. Since inception, we have experienced an extremely low turnover rate. So you can be sure you are getting a trustworthy candidate for your plumbing project. We are a 24/7 Plumber. We know emergencies happen, so we have a plumber available all 24 hours of all 7 days of all 52 weeks a year. We have got you covered with any problem you are having, and we won’t charge you extra for it. We offer many other services, including sump pumps, hot water tanks, backflow preventers, furnaces and boilers, plumbing fixtures and underground excavations. No job is too big, and no job is too small. Our goal is to become your plumber of choice. Please call at 716-864-7277 next time you need any sewer or drain repair, experiencing a plumbing issue, or perhaps need some excavation work. Whatever the problem, T-Mark Plumbing has the solution. Additional website: www.t-markheatingcooling.com  …

Family owned and operated since 1980. 4 employees. No subs. Cost is determined by the job. Travel charges may apply. Extra charge for after hours service may apply. License: #108. May contact by email. was a member of the U.S. air force reserves for 33 yrs , went to Afghanistan in 2008 ,then was retired in 2010.  …

Cellino Plumbing is a professional, fast responding plumbing company. Our expert plumbers serve all of the West New York area. Call us today!  …

ZINZOLA PLUMBING AND HDWR SUPS is currently rated 3 overall out of 5.

No, ZINZOLA PLUMBING AND HDWR SUPS does not offer eco-friendly accreditations.