Landscaping - Lighting
Snow Removal
Tree Service
Mulch and Topsoil
Lawn Fertilization & Treatment
Licensing
Insured
All statements concerning insurance, licenses, and bonds are informational only, and are self-reported. Since insurance, licenses and bonds can expire and can be cancelled, homeowners should always check such information for themselves. To find more licensing information for your state, visit our Find Licensing Requirements page.
Business Details 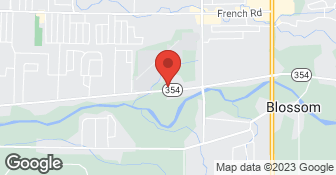 Our reputation has been built over the past twenty five years and we realize that it takes time to gain a customer but minutes to lose one. At Pinelli Landscaping, we believe in dealing honestly with customers and maintaining consistent quality in all phases of the landscape industry, from the initial consultation to the final completion of the project. Simply put, we care about our customers and we want to reflect that in our business practices. "We're built on the foundation of treating our customers the way we'd like to be treated, honestly and openly" states owner Tony Pinelli. It's obvious we need to offer quality products and service in the WNY market. We want our customers to count on us for the homescape needs. Pinelli Landscaping is a fully insured company, established and serving Western New York since 1994. Customer satisfaction is our main objective and we pride ourselves with quality service and professional workmanship. We know how important it is for you, the customer, to work with someone you can trust. Let us earn that trust by building a working relationship through collaboration of ideas to create a beautiful homescape that fits your style, your needs and your budget....

Based out of Lancaster NY, we proudly serve the entirety of Erie County and surrounding areas in all services landscaping and hardscaping. Everyone at Boss Landscaping is passionate about landscapes and always make sure that the customer is left satisfied!

Have you recently considered modifying, organizing or improving upon your landscaping or lawn this upcoming season but haven't gotten around to it? Landscaping can generate a tedious expense that not all are willing to fork out. Here is your chance to get an amazing setup done by landscapers with over fifteen years of experience! We offer Landscaping services at below fair market price. Services offered include: -Snow Plowing Contracts (see coupon) -Garden Bed Edging -Mulching -Spring and Fall Yard & Garden bed cleanup -Bush / Tree Trimming & Removal -Transplanting or Rearranging Service -Weed Whacking -Lawn Mowing (with use of private mower) -Laying down grass seed OR Sod placement -Available for other requests as well, Don't be afraid to ask! We are also experienced in other fields of labor which include but are not limited to: -Power Washing Houses, Siding, Patio Decks etc. -Painting Interiors as well as Exteriors -Any other odd jobs or labor work feel free to inquire! Pricing will either be based upon the task at hand or on a hourly basis to be discussed with the property owner. Guaranteed to be significantly more inexpensive than any local Business offers, and of equal if not better quality! We value any customer basis we can generate and guarantee our work to be fiercely competitive with the top companies out there! Thank You!

Tony and his crew showed as scheduled. Did the job and then some. We were very pleased with the transformation of our yard. We highly recommend them.

DESCRIPTION OF WORK
We had a landscape put in with a Uniblock wall. It's gorgeous!!

Called and left a message a couple times. Finally got a call back. Was told they would drive by and let me have an estimate in a week. Never heard from them again.

DESCRIPTION OF WORK
Never came back with an estimate

I've received nothing but compliments from neighbors and visitors to the house. They always asked me if they can refer him to him.

DESCRIPTION OF WORK
put in new patio and did landscaping. for christmas time he did holiday lighting and decorated the house.

He was wonderful. His estimate was an A. They are professional. I can't say enough about them. They've been good to work with. They guys are pleasant.

DESCRIPTION OF WORK
The landscaping was done by Pinelli.

The workers showed at the appointed time, They worked well, at one point I noticed that even though they had widened the bed, they planted the shrubs in line with the edge of the awning. I asked them to move them out a ways and they did. They installed the stone, cleaned up and we were happy, it looked great. After two weeks we noticed some of the shrubs were turning brown. We called Dwayne, and t...

DESCRIPTION OF WORK
We have an awning over our back patio with some shrubs at the edge of the patio. When it rains, the water streams off the awning and right onto the shrubs and the mulch surrounding them. We went to Pinelli's because of Angie's List and Dwayne took care of us. He came to look at the situation, then called us to come see the plan he developed. He was going to increase the width of the bed and move the plants farther from the draining water. He replaced the existing shrubs with new ones we picked out and they were to add new soil, put landscape cloth down and then cover with stone instead of mulch. We mentioned how poor the soil was in our area and were assured it was no problem.