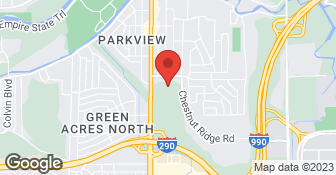 They respond to me if I can find somebody. I just think they have to have more people available on the floor to help you find things because my biggest problem in there is finding things. It is inconsistent in where they keep things. It is a little unorganized.

Description of Work
I like to go to Home Depot. I was last there for gardening equipment and plants.

customer service aspect was horrible. Went to Home Depot in NF NY to request a estimate for roof for our home. Man at store attempted to input request 3 times, each time stating computers would not take info, and tried again. Finally, took my name address and phone number, stating he would hand it to estimator in the morning, and we should hear from him within a day or two. After about a week of not hearing anything, I contacted Home Depot through their toll free number. Stated there was no request for an estimate. Put in a request and heard from estimator a few days later. He came out and talked about project, showed samples, etc. Met with him a few days later and signed electronic approval. After not hearing anything on project after about 2 weeks, contacted him to find out what was going on with our roofing job. Realized that not all paperwork went through fax, and stated he took care of problem, apologizing for mistake. Few weeks later, job was set up and roofers came to do job. Roofing company was excellent, very professional and did great job. Did knock off a piece or two of corner of siding, so i called estimator for Home Depot and his boss (I Guess) Greg. Who both responded right away and stated they put calls in for roofers to contact them and return to fix siding (as they were around the corner doing another job). Heard nothing and no one came by to fix siding. About a week later, called Home Depot estimator and his boss, Greg. Received no return calls. A few days later, contacted Home Depot call center and spoke to a woman who stated Greg was in a meeting, but she would give him the message and have him return my call. That never happened. Called call center again a few days later, and spoke to another lady, who stated no service folder was ever opened, so she did and stated Greg would get back to me within 48 hours. That never happened. Luckily, had message from roofer on my voice mail, so I contacted him directly. He stopped by our house the following day and fixed issue. Have never heard back from Home Depot. received bill from HD for roofing job and noticed they had given us 12 months same as cash, when I submitted an offer from them and was told I would receive 24 months same as cash. Back to the call center, and lady whom I spoke to stated she did see offer on our order. and fixed that issue. We have used Home Depot many, many times over the last 15 years and have never had the problems we encountered on this job. As I stated, roofing company was great, did a great job and roof looks great. Home Depot call center ladies were very helpful and professional. I truly resent not having calls returned and the, what I consider, unprofessional manners of Chuck & Greg in not helping with my issues, and that I had to do it myself (with luck). The home depot i dealt with was through the niagara falls store, not the amherst store. UPDATE. Had gutters replaced and found several rotten wood that should have been caught and corrected at time of roof repalcement. Contacted Home Depot about this and was brushed off by salesman, and he stated it wasn't their problem, it was the gutter guys problem. Stated if Home Depot had done gutter job, they would have corrected it, but as we didn't use them for this project, basically we were on our own. Don't think I'll be using Home Depot for any more work at my house(s)

That was good. I was extremely happy with the job and the quality of everything that they did. The people were a little bit sketchy to really get a feeling for and understand. Everybody who they sent over to work on it were Russians. They didn't have a good address of language. We found it hard to talk to them. Eventually, we got it through and they did a good job.

Description of Work
I had a kitchen remodeling through Home Depot a couple of years ago.

A nightmare. Cabinet contractor measured kitchen at 7'x 12'. Flooring measured it at 7'11" x 12', but said I needed a 10' x 12' piece of flooring for "seaming". When I questioned it, they recalculated based on the 8' x 12', and added 40' of molding strips (to be placed behind the new cabinets?). When I returned with the floor plan, the flooring dept. refused to look at it, and added they'd already recalculated the room once and couldn't do it again. After returning to the kitchens dept. and explaining that I might have to cancel the remodel ($9000) as the flooring dept was holding it hostage, I finally met my expediter, who reworked the measurements and assured me there wouldn't be a horror story. That was in July. My cabinets arrived at the end of July. The new sink is in my dining room, along with the faucets and the new light fixtures. The contents of the existing base cabinets are in boxes on the front porch. I still don't know where the new floor is. What's most annoying is that it was all paid for in July.

Description of Work
As part of a kitchen remodel, after cabinet tear out, new sub floor and vinyl flooring were to be installed.

They were okay. I really don't have to many exciting things to say about them. They did the work and left. The price was reasonable and the work was done so that was really all I cared about. I would however recommend them though because they were on time and professional.

Description of Work
They installed a new garage door. The door was for my two car garage, but it is larger than the normal sized door.

Home Depot flooring department was good, in particular the department head was patient, knowledgeable and courteous. The internal communication at this store needs improvement, however. Picking up of the material at the store, required nearly an hour, due to poor coordination of their employees. It took two phone calls to have the installation scheduled. Nevertheless, subcontract installers were highly experienced, meticulous and efficient. Though the work was a bit more expensive than we would have preferred, the removal of an old floor, which took bulk of the morning, was the main reason for the cost escalation.

Description of Work
Removal of an old oak wood floor and installation of Dupont laminate floor, for an extended kitchen of about 300 square feet, including hallway and dining area. The cost included material and labor (2 workers one full day).

Home Depot did an okay job. There was no follow up call. I felt that they did not listen to me as a customer. I would not use them again.

Description of Work
Home Depot installed a new front door on our home.

BATH FITTER of BUFFALO is Western New York’s leading one day bath remodeling company. We offer customer made acrylic bath tub liner, free standing acrylic bath tubs, tub-to-shower conversions and one piece shower enclosures. Our products are custom made to fit over existing fixtures or are made to replace an existing tub or shower, for quick and clean bathroom renovations that will last a lifetime. With our tub to shower conversions, we can convert your existing tub into a mobility friendly walk in shower. All of our Installers and Sales consultants are factory trained. All of our team works directly for us, we do not sub contract out our work. Franchise owned and operated by Ideal Bathroom Solutions LLC., doing business as Bath Fitter.  …

HOME DEPOT is currently rated 3.8 overall out of 5.