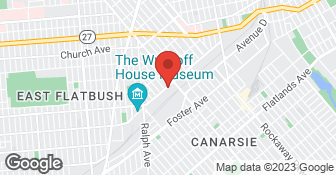 We at TDY Moving & Storage New York are a family owned & operated moving company that has been running from generation to generation, serving our customers in the same professional manner. Our staff have many years of experience in the moving and storage business, offering you peace of mind through all of our services. We offer storage, local moves, international shipping, and packing supplies. We also handle antiques, pianos & valuable art work. Call us today for a free quote! 347-535-3131 or feel free to email us at info@tdymoving.com ...

OFFERED BY
TDY Moving And Storage…
5.0

OFFERED BY
TDY Moving And Storage…
5.0

Went very well. They came on time to NY loaded and packed. There were two trucks. They were supposed to bring to Vermont and unload the second day. Unfortunately, only one truck made it and unloaded partial. The second truck which was close to new broke down in NY and had to go to shoo for diagnostic. They came third day and unpacked everything. Other than the delay. This move went without a hitch though there is a small crush on old headboard that was not there before the move. Overall went very well

Description of Work
Move from Bayside NY to Marlboro VT

Description of Work
Moving from apartment to house

The movers here are very quick. I have not experienced a moving service as fast as this. They did not only accomplish the task fast but also they were able to accomplish it before 30 minutes earlier to the said time. I must express my gratitude to the guys who packed and unpacked my stuffs. The service went a long way to help me to calm down. I reached my new home on time, relaxed, took a shower before going to bed.

I bet you, you will not find a better moving company in NY than TDY Moving And Storage. They demonstrated clear professionalism from the beginning to the end of the move. The movers were well mannered and courteous and I did not have to spend additional money in the course of the move.

Description of Work
Moving from a house to a one bedroom

There was absolutely no flaw in the entire move. A colleague in my office recommended these guys to me and since I did not have time to make a survey or choose by myself, I simply went with his recommendation. I moved to NJ and believe me the job was indeed perfect. I must appreciate the way these moving experts took care of the entire job throughout the move.

Recently I used TDY Moving And Storage to move my home to a different state. I used them because of their reputation and price. When I called at their office, I spoke with sales rep offered me very reasonable price and asked for the smallest amount as advance. I did hire TDY Moving And Storage for my move. Movers showed up 8am sharp at the moving day, nicely wrapped and boxed the goods, paid extra care to the fragile items, moved my belongings within the allotted time. I am really satisfied with the service and price.

We have heard so much about you guys that we simply went for you without making any further search. Believe me; the service we got was even greater than what we anticipated. TDY Moving And Storage made our move excellent and superfast. They deserve two thumbs up for the perfect move.

On my move from NY to PA, I found the moving services of TDY Moving And Storage very helpful. I hired them to help me with the move and these guys did an obviously professional job. These movers are masters when it comes to packing and moving stuff. Their courteous attitude is also worthy of note. I really had a great time moving this time around, thanks to the movers who made it possible.

Being recommended by an office colleague, I had to go with these guys. Meanwhile, I still thought that I would handle some minor issues but they proved me wrong. They were diligent and truly experts in moving of stuff. My move turned out to be excellent and superfast.

Description of Work
Needed to move to a new home

This moving company is the best company I have ever seen and I always recommend it to any person who wants to get the best company when he wants to move. They do not give you any chance to complain about anything. We established a cordial relationship between us as they continue to work. They were giving me the practical suggestions and they were following the instructions I was giving in a careful way.

It went extremely Well. The movers were careful, helpful and thorough. They seemed to realize how stressed we were moving out of a nyc co-op. All three were intelligent guys who we enjoyed meeting and would definitely recommend. The team leader went above and beyond just lifting and hauling; he kindly brought a piece of furniture after observing us disagree over whether to keep or throw is out, a very sweet gesture.

On Nov. 11th, 2020 I had the most wonderful moving experience at a difficult family time. The movers, Morris, Rocky and Norbeck were my angels. Professional, timely, kind, compassionate and understanding. And lest I not forget, Billy, who took my order over the phone and was very helpful. GREAT JOB and THANK YOU! Eileen O'Brien

It went very well considering what a difficult move it was. It was costly because it was 2 days worth of a big move with many heavy pieces and stairs but fairly priced. The foreman, John, was superb; professional and kind, he navigated challenging circumstances and used good judgement and care. The rest of the crew also made their best efforts. Administrative staff is very pleasant, professional and helpful. I highly recommend TDY.

Description of Work
2 days of moving services. 1st day was wrapping and prep, 2nd day was moving to storage unit.

This by far was such a great and swift move. The whole team worked smart and efficiently. Polite and professional. I can not stress how smart they worked since the move was to a fifth floor walk up. I highly recommend them in you are moving!

Description of Work
Moving to a new location

Fantastic. The men were respectful and helpful and nice also. I would hire them again in a second.

Description of Work
Excellent. They packed up my stuff with great respect and honor.

Excellent service, competitive pricing. From the first contact to the actual packing and unpacking, we were always met with professionalism and good will. We were extremely satisfied with the service. They took very good care of our belongings.

They were excellent, knew what they were doing, moved fast, all items were cared for, and it was an overall stress free experience.

Description of Work
They packed all of the items and moved them to the new property.

The movers that were sent by TDY were beyond capable, friendly, professional and overall fantastic. I've already recommended TDY to others and would definitely use them again. I am overjoyed by the way I was moved and how well it went.

Fast, efficient quoting process. Packing materials dropped off as promised. Crew arrived on time. Smooth moving experience. Number of hours was under estimated but I anticipated that based on other estimates I received. Still a good value.

Thank you [Member Name Removed]! we appreciate your business, best of luck in the new home!
2.0

I previously worked with off the books movers, but the new building I was moving to required a COI. I went to your site and saw that TDY Moving & Storage was listed at the top of movers in my area. I submitted a request for a quote and I should have known that when they were the LAST company to reach out that that was a red flag, as other, likely more capable companies reached out to me first. At first they were great and seemed very attentive, but when I needed to attain the COI (the main reason I even searched for movers) it was treated like it was rocket science. The woman in charge of the COIs, Sara Hagbi, was extremely hard to get a hold of and after a week of followup, sent me a COI with an expired policy. I chased this company for 2 weeks to finally get a COI 2 days before my move-in date. My property manager had to reach out to THEM and THEIR broker to get this moving. Unbelievable. Whenever I would call to follow up, my sales person, John Romano, offered to help and said "sorry she's not here. we'll give you a call back" - guess what? no call back. The only competent person was a woman named Angela, who didn't even have to help me as she was on the accounting team, but went the extra mile to help me out, which I appreciate. Now the movers! Unfortunately, I didn't get their names, but there was only ONE of the three that was professional and seemed to be a seasoned mover. The other two acted like it was their first rodeo. Also, the other two used my bathroom - both at my old place and new place - without asking if it was ok... kind of gross. The third mover was a younger guy, was not wearing TDY apparel like the other two men were, and decided to smoke a joint in the loading dock of my new building, and cut himself with a box cutter and bled on my new floor. The other two, less experienced movers, also broke the leg of my dresser and the one seasoned mover let me know and apologized. The job in general was cheap - guess you get what you pay for. Terrible experience and would never refer these morons to anyone I know. You should consider removing them from the top of your movers list.

Description of Work
Moving from NY to NJ

My mover TDY Moving And Storage did an amazing job. The packing and the loading less than given time, upon the delivery all of my furniture was unwrapped from the protective blankets and placed in the rooms. The movers were very patient with all of our needs and professionally handled my belongings. I could not ask for better movers.

I can't even tell you how many times I have been cheated by moving companies. But my job requires me to move around and so I keep hiring new ones hoping they'll turn out to be the good one. I finally found the right moving company- TDY Moving And Storage. This conversation employs the best movers in the country. Their network is very big and no distance is too long for them. They were clinical with my last move. They worked fast, delivered on time and charged reasonably. I checked and none of my things suffered any damage. I am hiring only them from now on.