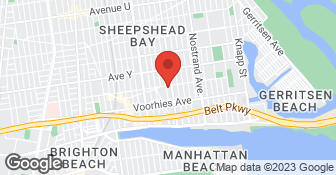 When you need help with your heating, ventilation and air conditioning, you don’t want to hear that your technician is stuck in traffic. You won’t hear that excuse from us. We’re based in Brooklyn, at Sheepshead Bay road - in an office, not a phone drop or a postal address. It gives us quick access to many of our customers. But we also have workstations in Staten Island and Long Island. This way, our techs can quickly help you, whether you have an emergency or a routine call. They can rapidly fan out across Manhattan, Queens, Brooklyn and Long Island, ready to install mini-splits and portable AC units, clean chimneys, service residential and commercial HVAC systems, solve your radiant heat problem or get your furnace running more effectively. Our techs are experienced in all sorts of HVAC installation and repair, from heat pump systems and oil furnaces to air conditioner compressors and ac units. How we began As veterans of the industry for more than 10 years, we formed the company in Brooklyn in June 2016 with just one van and one technician. Fortunately, satisfied customers have rewarded us with many referrals and now we have seven vans and 15 people on our team, including office staff. We’re very proud and very grateful for our success. The team leader is Greg. He oversees all three locations and keeps us organized, making sure we respond to calls and we don’t leave until the customer is satisfied. Our techs are experienced, licensed and insured. We can help you, whether you want a new heat pump, a boiler repair, clean air ducts or a commercial HVAC overhaul....

41% off - Chimney Sweep and Safety Inspection…

34% off - Furnace and Air Conditioner Tune-Up…

$150 Credit Toward a Water Heater Installation…

$350 Credit Toward a Water Heater Installation…

Affordable HVAC repair service. You can actually ask them to do little extras at no additional cost. After I called them for emergency repair of our AC unit, they offered a complementary cleaning for the unit. Amazing customer appreciation. Totally recommended!

After taking our appointment they arrived my house in a hour, observe problem so carefully and fix it in two hours. I'm very much pleased with their fairness price and prompt service.

I had an issue with my stream boiler last Saturday. Did a google search and called multiple companies except Lighthouse (also part of Premier HVAC) picked up the phone right away and the tech Slava (unsure if I spelled his name correctly) showed up an hour after my call. He was very knowledgeable. He first did a thorough inspection on my streamer boiler (I thought mine was called furnace but he corrected me and luckily Lighthouse also repair stream boiler), then giving options (replace the water feeder and side glass or the whole stream boiler since mine was already past 30years and it may not last long). Due to budget issue, after discussed with my family, we chose for now just changed the parts. Slava has no problem with that and I got lucky that he was about to arrange time to have the work done the same day. Slava is also very patient and professional. As he learned that I am new to streamer boiler, while he was doing his work, at the same time, he was giving “a lecture “ in terms of names, functions of each parts and the concept of how the stream boiler works and how to maintain it properly. I gotta be honest that I don’t recall all the he mentioned but at least now I have a concept. In terms of the price, I can’t say that it’s cheap but you pay for the quality of service that you get. Slava literally taking his time and spent about 4 hours to repair. Highly recommend.

I called this company and they provided a time to arrive between 10 am and 12 pm on 4/28/2021 The tech person arrived at 5 pm He said that they were about to send me a diagnosis and estimate The owner called me saying that he was sending me the options for repair or AC replacement Still waiting after paying $ 283 for a regular visit and getting nothing Edit: This is in response to the contractor The tech person who came home said that both equipments were needing replacement not the equipment Two emails were sent with no response to Nikolina I paid money for nothing The tech person also left the heat set in 90 F and woke up melting

Hello [Member Name Removed], It’s unfortunate you are unhappy with the service. We received information about your equipment on Thursday. We have to send out email to vendors to receive quotes for new equipment. It’s been one business day and we receive a bad review? It was clearly stated to you that it would take 3-5 business days for you to receive the quotations. Not sure why the poor feedback and no follow up call. Good luck with the replacement of your equipment.
1.0

[*** Link removed ***] Stay away from this company if: - You don't want gas boiler work done by non-licensed workers, contrary to company statements. - You don't want them to have to come back the next day after allegedly completing the job, to again have to fix the exact same issue contracted for, even though the work had been declared completed, warranted and been paid for, only a few hours before, and then ask for more money yet. - You don't want to be denied going over time and material charges at job completion because: "it is too late". - You don't want to hear: " We cannot identify all problems with your boiler" and " If you want no problems, install a new boiler" after you paid $275, non applicable to the job cost, for an initial tuneup and job estimate. - You don't want to be called a "dumb f****** piece of s******" when you express customer dissatisfaction.

It went very well. Professionals knew their job and were polite and cleaned up after themselves.

my dryer wasn't working technician said vent was clogged.....when HVAC company came there were so honest....the vent was not clogged so they only charged me for an inspection.. and this was on a Saturday morning I will definitely be calling them in the future

The technician arrived promptly, but we got off to a rough start. This was mainly due to communication problems. He spoke very little English, though he did seem to understand my questions. At first, he seemed unfamiliar with my dryer, and puzzled as to how to proceed. It is located in an area that does not have a straight path to the outside vent. But he managed to keep working and successfully vacuumed the duct. I think he would greatly benefit from learning more English.

Description of Work
We had a roofer starting work today and hadn't been able to line up an HVAC company in advance. Job required disconnecting and relocating condenser for a Fujitsu mini-split system from sitting on top of roof to being mounted on side of building. I also needed the 3 indoor units to be serviced as well.

Thank you for taking time and leaving us a feedback! We try to perform the best work quality for our customers.
5.0

I was doing renovation in my apartment in Manhattan and needed to get my firebox rebuild as well as the chimney lining. I went with Premier hvac and very glad I did. Through the whole process they were knowledgeable, professional, helpful and timely. It was a big project which required time, but they handled it great! I like how they did my firebox, it looks much better then before. Trustworthy company with good people.

Beware i paid them for chimney cleaning they never came to perform the service. States that they contacted me via email, call to the number yield no reply. Last call denied service outright saying they will no longer honor or refund my money highly unprofessional.

Hello, You purchased a deal on Jan 12,2018. We contacted you via email on Jan 16,2018 and Feb 16,2018 (yesterday we send you screenshots as well). Never heard back from you until July 2018 when you contacted us via Angie’s list app. We provided you with the phone number to call and schedule an appointment. You gave us a call on Jan 31,2019 saying that you have never received the service and we must have contacted you via Angie’s list. We have no such obligations, therefore we did contacted you few times. Unfortunately we can’t honor this voucher due to its expiration. Hope you all the best, Premier HVAC Services.
5.0

I was looking for permanent HVAC company for my home in Long Island, I usually do a yearly maintenance for my units and I wasn’t happy with my previous contractors. I choice Premier based on their good reviews and I spoke with a really nice gentleman on the phone who scheduled an appointment. They were reasonable in price and did a really good work, I am really glad I finally found a company who I can trust.

Description of Work
Annual maintenance for my house.

It’s hard to find a good reliable HVAC company in NYC when you have your small business and not get scammed or overcharged. I have been dealing with Premier for a couple of years now and all I can say that those guys are the right fit for me. They always on time, fixing my units or performing maintenance, always nice and polite. I really like to deal with them and hope to continue our relationships in future.

No response to emails. No answer when called. I don't get it.

Hello [Member Name Removed], I apologize for the bad experience you have had, but we didn't received voice mails or emails from you. We are very busy this time of the year and might missed your call, please leave us a voice mail or feel free to send us an email. *In addition, after we have reached you, we said that we don’t service your area. Best regards.
5.0

Excellent cleaning of my dryer vents. My vents were hard to reach but they were so patient and did a thorough job. A+++. Wonderful, also they were on time, and did the work efficiently and cleaned up before leaving. Professional, knowledgable and friendly. Would use again. Thank you.

These guys quoted $225 for a simple dryer vent cleaning when many other vendors have quoted $100 or less. Look elsewhere!

This is a unfair review. You really wanted to use our company but started telling us about how other companies charge less. You wanted to haggle with us but we are not a bazaar. We simply told you that our price is our price and you are free to hire a different company that you mention of. You got upset that we didn’t want to book you. Spiteful review from somebody who wasn’t even our client. Good work isn’t cheap and cheap work isn’t good!