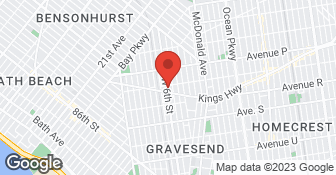 Our neighbors discovered a rat’s nest in the back yard fence-line between their apartment and ours and additionally a second home for rats by the trash area shared by our whole building. We called Evergreen Eco Pests and were told that they could come by and for $300 they would close any holes up to 3 inches and dust with poison to eliminate the rats. But because there were two areas with rats, the trash area and the one in our back yard, the cost would be $600. They arrived, didn’t close any holes, didn’t dust any areas, and instead only wrote up a report telling us where the rats were (which we already knew) and what felt to me were fairly obvious explanations about how the rats were getting in (i.e. “rear left of structure has a large gap between buildings — this gap is large enough for rat entry”). Rather than setting any traps or dusting, they told us we should have a contractor rebuild our fence so it’s less accommodating for rats. Then they left and charged us $598.81. To their credit, this is, I guess, what we agreed to. I guess there were no holes small enough for them to fill, and I guess they felt there wasn’t a way to effectively dust. But to charge $600 to hand me a piece of paper that tells me where the rats are which I already knew and to still have rats, you can imagine I feel a little gouged. Given that I felt nothing had actually been done and had been charged quite a lot of money, I called to complain and see if I could negotiate. To pay $150, even up to $300 felt reasonable to me. They made the trip, they wrote up a report; they should get paid for their effort. But for nothing practical to have been done to ameliorate the rat issue and to charge the full amount (that double price (!) just because they looked at two sides of the building!) really left a bad taste in my mouth. I was told that’s what I agreed to and that was that. I recognize that they feel they did what they said they were going to do. But I’m definitely unhappy with the service I got. And since they weren’t interested in being flexible and working something out with me, the best thing I can do is turn here.

PEB is a family-owned business and has been serving the Brooklyn area since 2000. Rats, mice, cockroaches, bed bugs, mosquitoes, spiders, stinging insects, termites, and many other pests pose a number of significant risks to health, property, and food. Our professional technicians are highly trained, licensed, and regulated. Additionally, we are required to complete continuing education courses to ensure continued competency and environmental stewardship. We are committed to providing quality pest management services to protect your family, health, property, and place of business. By combining proven science and leading-edge technologies, we strive to provide the highest value in pest management services to our clients.  …

J & L Pest Control Inc. offers a wide variety of services for the control of various pests. Utilizing our Integrated Pest Management approach, our service technicians will ensure that your facility is protected from pest activity. Our service covers more than 30 of the most common types of pests, including Ants, Bees & Wasps, Bed Bugs, Cockroaches, Fleas, Flies, Mosquitoes, Rodents, Stored Product Pests (Pantry Pests), Termites, Ticks and many more. Our certified pest control professionals will inspect your home or business and customize a program for the elimination and control of pest activity from facility. To learn more about our services, or to schedule a treatment, please contact us today!  …

At this time we do not service termites or commercial kitchens.

Evergreen Eco Pest Control is currently rated 2 overall out of 5.

No, Evergreen Eco Pest Control does not offer a senior discount.

Are there any services Evergreen Eco Pest Control does not offer?

At this time we do not service termites or commercial kitchens.