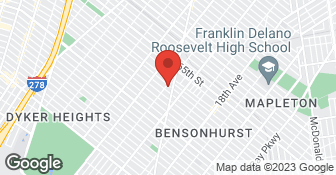 I was over charged $1,053.25 from my estimate and received my household goods 10 days past the original agreed delivery date as indicated on the bill of landing. The delay cost over $1,200 for 10 days of lodging and 10 days of per diem for two adults. A person named Jacob Feder originally quoted $3,643.00 for a one bedroom move from NYC to San Francisco (I agreed to pack my own boxes). After they stored all my stuff in their truck, they gave me a new total of $4,546.25 since I had an additional 175 cubic feet! They just arbitrarily gave me the measurement without giving me the opportunity to measure or inspect the load inside the truck creating a $903.25 increase. I gave them exact details of what I needed to move and didn?t deviate. We actually did not pack 1/3rd of the items we discussed over the phone during the pre-move estimate. I was told that the move would take two weeks to deliver once I gave the movers my final destination address here in San Francisco. On July 9th, I called with my address. They said it would take 7-10 business days. After two weeks, I called trying to figure out where everything was. The same guy, Jacob, stated my goods would definitely arrive in one more week due to interstate traffic delays. One week later, I still did not have my stuff. By Wednesday July 23rd, I called again. Jacob stated that I should expect a call from the driver and that my goods would get there the next day on Thursday, July 24th. No call. I finally acquired the driver?s number and called myself. The driver stated that the delivery would occur on Friday July 26th. On Friday the driver called saying that the delivery would now occur on a Saturday and that there would be an additional $450 charge since he needed to move my items on a small shuttle to get into the city. This charge was never explained to me at any part of the process or initial quote, even after giving Jacob my city destination (the $450 charge was blanket charge to any destination in San Francisco). The $450 charge was given to me one day prior to the proposed day I would receive my shipment without any warning. I told them I would absolutely not pay an additional $450 hidden charge. This refusal delayed delivery once more. The new delivery date was now set on Monday August 4th from 3-8PM since they didn?t have a shuttle available until that day. On my scheduled delivery date (Monday, August 4th), I received a call at 5PM stating that they could not find a shuttle to move my goods and the movers would now come on Tuesday August 5th. I had took my entire day off to receive my goods and they call during the delivery time to tell me they have to push it back one more day with zero notice or warning. All this time I tried to talk to a manager at Amazon Relocation. Jacob told me the manager?s name was Sean at Amazon. However, no one wanted to pass me the phone over to Sean. Instead I had to deal with Jacob. Everyone, including the phone operator Jennifer?refused to pass me the phone over to Sean. What?s worse is that they felt no obligation to help out with my situation. Every request was refused and given another excuse as to why I didn?t have my goods. Later I found out that a Sean never existed as theBBB.org website lists Jacob as the owner. After having my goods picked up on June 26th, they were final delivered on 05 August 2014. A full 12 days over the verbally promised date and 10 days over their agreed delivery date as indicated on the bill of landing. Without my furniture and cookware, my wife and I were required to constantly eat out and pay for lodging, as we did not have any of our furniture.

Description of Work
The moving company was hired to pick up my goods from my 1x1 bedroom apartment in NYC and move it to San Francisco, CA.

Their service and promise to provide excellent service is fraudulant.

Description of Work
This company picked up "some" of my personal belongings and my furniture. When the truck and men arrived they told me that I had too much and only took my furniture and a portion of my boxes. There was also an increase of $800.00 to my quote of $1800.00. We discussed delivery to my new home in North Carolina and Amazon didn't seem to have a problem. When I was ready to accept delivery a time was set. When my furniture arrived there was damage done to my bedroom furniture. I placed a claim and forwarded pictures to substantiate my claim.

Don't use this moving company.Do get references from people who had good experience from movers.

Description of Work
We needed to move from Philadelphia to Florida. Spoke to Jacob Young. He asked how many items I would be moving? Gave him an estimate. The movers came with a truck they rented because their truck broke down. It took 9 hours for them to remove the items. They left a mirror and dresser behind, because there was no more room in the truck. They took apart a old hope chest from my grandmother and a grandfather's clock. My husband had a computer desk that got destroyed. They delivered the furniture in 10 days because they got lost We had to stay in a motel for a couple of nights. The company is based in New York. Truck drivers bid on the for the job. I would never use this company and hope nobody use would either.

We're a reliable and professional moving company ran by an industry leader with over 20 years experience in the moving and storage business. When you contact us, you'll be treated as family because we truly care about helping you out through the stressful task of moving. We offer free, in home as well as phone consultations. In home estimates are encouraged. We servive both local and interstate moves. Packing service is available as well. If you require your office be moved, that is also something we can help with. All of our movers are hand picked by the owner and thoroughly vetted and trained the Gotham way prior to working on any move. You can expect clean cut and highly skilled personnel on the job site. Most employees have actually been working hand in hand with the owner for over 10 years.  …

We are a full service moving and storage company. We only hire full time professional movers who are trained in our facilities. All our men will arrive clean cut and uniformed. Our truck are painted like Holstein cows!!!  …

Bonded
Insured
All statements concerning insurance, licenses, and bonds are informational only, and are self-reported. Since insurance, licenses and bonds can expire and can be cancelled, homeowners should always check such information for themselves.To find more licensing information for your state, visit our Find Licensing Requirements page.
General Information
Free Estimates
Yes
Eco-Friendly Accreditations
No
Warranties
Yes

How is Amazon Relocation overall rated?

Amazon Relocation is currently rated 1 overall out of 5.

No, Amazon Relocation does not offer eco-friendly accreditations.

Are warranties offered by Amazon Relocation?

What services does Amazon Relocation offer?