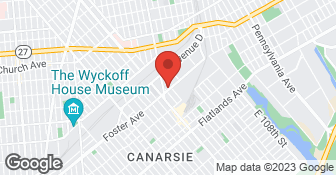 Since 1983, Chatel Construction Corp has beautified, enhanced, and increased the value of homes from Manhattan to Montauk. Whether yours is a single family home, co-op or condominium, we'll make your renovation dreams a reality. We are residential remodeling specialists. Before any cost is quoted, an experienced consultant will meet with you to discuss your specific needs, to outline your opinions and to recommend the best solution within your budget. Whether your remodeling needs are large or small, our goal is to keep you completely satisfied.  …

Archats LLC is family own business that is in the construction field for the past 15 years. We are customers orientated and always willing to go the extra mile to get the job done at the best possible price. The success of the company is due to the dedication we provide to our customers. No matter the job, customer satisfaction! is always our number one priority! we look forward to building a lasting relationship and guarantee your satisfaction! We are a bilingual company, and are happy to serve both English and Spanish speaking communities!  …

*WE DO NOT INSTALL OR SERVICE ANY TYPE OF AIR CONDITIONING UNITS* Big Apple Installations is an industry leader, providing quality, reliable service to the Brooklyn, NY area. Our work is always guaranteed! We're National Grid Value Plus Installers. Ask us about oil to gas conversion for your boiler and we'll tell you about the rebates we can get you!  …

I am very happy with Mikes Air Conditioning. Here it is JULY and I while in the middle of doing some renovations to my home, I noticed the AC wasn't working the way it should be. I contacted Mike's (fearing the worst) and they sent out a service technician who was able to repair the system for a reasonable cost and buy me some more time before I have to replace the entire system. I had some minor ...

The second attempt was on time and installation was smooth and quick. My bedroom was saved from the hottest and muggiest days of the summer. I am writing this to amend the previous review which was late and then encountered problems with my building. Coary made it right. Thank you.

Everything was done,on time and very professionally. I was very pleased with the outcome and how they were able to save me quite a bit of money!

Description of Work
Updated my Condensor and renewed my duct work!

Thank you sooo much for this review, it means a lot to our business.
5.0

I had 3 window air conditioners that need cleaning one of which was a few years old and had been sitting in my basement for a while. It was molded in the inside but worked fine. Mike's cleaned each air conditioner like new. I will definitely be using them again. Everyone there was friendly and helpful I actually dropped them off to be serviced on my own which was much cheaper than having them pick...

Greetings Mr. [member name removed], This is Coary, operations manager for Mike's Air Conditioning. I am very sorry to see a review, after speaking with you on numerous occasions to arrange for this service. However, to be fair, you and I had spoken early in the morning(around 9-9:30 AM) to confirm if the management company had received our certificate of liability, and you stated you were not sur...
5.0

Mike's was easy to get in touch with, punctual, efficient, and the men worked hard and seem to have done a good job.

The phone was answered promptly. The Operations Manager Coary answered all of my questions patiently and fully. Scheduling was swift. They gave me a roughly 3 hour window for the technicians arrival and Coary called me 1/2 hr before to let me know they were on their way. The technicians Ray and Ray were extremely professional. They answered my questions expertly. They took measurements to determine whether some of my units were underpowered (which I was fairly certain was the case). They gave a cursory check to my electrics to see if I could easily rewire for more powerful units (I could). They took my existing units away for cleaning. The units were cleaned and serviced quickly, and were ready to be reinstalled, but it was apparent that two of the units were underpowered (and 1 was overpowered). Coary and I agreed for me to purchase 2 new larger units and shuffle the remaining units around for better cooling. As I now owned 7 units currently on their premises, and only needed 5, there was a little back and forth about what to do, and price revisions, etc. I initially disagreed with Coary's proposition, and had a very strong opinion of my own. Coary and I negotiated a fair settlement. He was patient, professional and accommodating at all times. They came and reinstalled 5 a/c units, again punctually and professionally. I also arranged to have them clean my dryer vent. Coary also put me in touch with an excellent electrician who came and changed my wiring while the a/c's were in the shop so I could use the higher BTU units. My initial call was placed on a Friday, by the following Monday we had the Certificate of Liability, and the technicians were in and removing the units. They were reinstalled the following Friday, and it could have been sooner, but we needed time for the electrician to do his work. I feel that this turnaround could not have been faster.

When the unit was returned and the timer no longer worked, Mike's A/C replaced the part with a fully functioning used one and did not charge for it. I could not have asked for a better response or better service.

Description of Work
Picked up my 8 year old air conditioner (and left a loaner) for a thorough cleaning.

Our experience dealing with Mike's Air Conditioning was nothing short of horrendous. Before getting into the details, I will say that the actual quality of installation of the ACs was satisfactory. It was everything leading up to the installation and the circumstances surrounding it that led to this review. Here's what happened: (1) AC Broke While in Storage: The three-year-old AC that we stored with Mike's for the winter was working when they picked it up for storage, but somehow became in need of repair when it came time to return it to us. We were told that the cost to repair it would be more than the cost of a new unit, which of course, they would happy to sell to us. Ultimately, we were credited approximately $200 for the unit towards the new units we purchased from Mike's. (2) Did Not Listen or Respond to Needs: We wanted to install two new ACs into two smaller windows in our apartment. This was explained when they picked up our original AC last fall and then again in a number of subsequent phone calls to Mike's, but somehow we were repeatedly told that the best AC for our windows were units that actually would not fit the windows. We were also on the receiving end of a lot of "upselling" in terms of models and BTUs, and yet the up-sell models would not even work for the size windows we were using. Concerned that Mike's just wasn't getting it, we followed up with an email (at their suggestion) to Mike's with photos of the windows, the dimensions of the windows, and a photo and description of the electrical outlets for the ACs. We never heard back from Mike's in response to that email. After almost a week passed, we followed-up by phone and pressed whether their proposal would actually work for our windows, and it was as if we were starting from scratch with them. They seemed completely blindsided by everything we were discussing. It was during this conversation, however, that they seem to finally get the fact that their proposal had nothing to do with what we had been asking for -- and that they were unprepared to make a suggestion. In fact, we ended up telling them what kind of units would likely fit in the windows, and provided them with information on the most current models. It then took two further phone calls to get an estimate on price. We finally got our estimate of $1,700 +/-. (3) Scheduling Fiasco / Installation Late and Finally Completed at 10:00 pm: When trying to schedule the installation, we were given "tentative" dates and basically told that our neighborhood was really out of the way (Washington Heights) and that they do not work on weekends. A day or two before the "tentative" date, Mike's confirmed and provided a timeframe of about 3:00/4:00 pm to 6:00/7:00 pm (estimating a 3 hr hour custom installation). We told Mike's that the work really should not take place after 5:00 pm, and certainly could not start after 5:00 pm, because of our building's rules. We were told not to worry, and that they would call one hour before their expected arrival with a more precise ETA. At 4:00 pm, we had not heard from anyone. We called Mike's and were told that their guys were still at another job, and that they would maybe be at our apartment around 5:30 pm, depending on traffic. We said that would not work given our building's rules, and they suggested rescheduling. We were not about to start the "tentative date" process all over again -- given that we were already 2 weeks into this ridiculousness. They, however, wanted assurances from us that their guys could actually work when they got to our apartment because otherwise it would be waste of their time. We went ahead and got clearance from our buidling for the late work. At 6:00 pm, we began hearing from the guys coming to install the ACs. They were lost. They told us they weren't even sure whether they were in Manhattan. At about 6:15 pm, Mike's called to confirm that their guys had arrived. We told them that they had not arrived and that they were "lost." At this point, we also communicated our complete frustration with the process -- and amazingly, we were not offered anything but an apology. At 7:00 pm, the guys finally showed up with the ACs and begain installing them. The installation took three hours, as expected, and concluded at 10:00 pm. The installation was very loud and messy (including in the hallway of our building), and we found ourselves having to awkwardly apologize to our neighbors the next day for the incredible disruption.

Fast, reliable, and friendly. Gave us a quote for services. I will use them agin in the future.

Description of Work
Proided a quote for duct cleaning