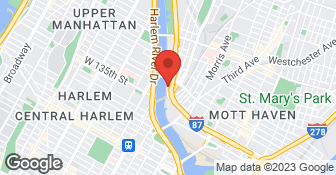 100-160 EMPLOYEES, NO SUBS, COST IS DETERMINED BY FLAT RATES AND HOURLY RATES, ASK FOR DETAILS ON TRAVEL CHARGES....

Description of Work
The absolute worst moving company in the New York area. Totally unethical and incompetent. They book jobs and then don't show up. And they don't even call to tell you they are not coming! This happened when they were supposed to deliver the boxes and packing material and then again when they were supposed to pick up the furniture. They are totally unreliable.USE ANYONE BUT THEM!And I suspect many of the favorable reviews on social media are contrived, likely written by employees.

I had typed out a whole long description of the nightmare move - the cut wires on expensive chandeliers that had to be rewired (at our expense!) the broken furniture, the bad attitude of and quot;Billand quot; and the massive about of damaged personal effects. They broke ivory pieces we had and replaced it w etched PLASTIC! I typed it out then decided that I will simply give you this warning. If you have expensive furniture, art work, lights, antiques of any kind and you use this outfit to move you anyplace you will regret it. Its been over 6 months since we moved into our home and we STILL don't have furniture they took on moving day to fix and I have had to threaten them to get it returned! Bottom line is be warned…with these folks you don't get what they advertise. I wish someone would have told us in advance of us using them. Now we have to pay to have our things repaired. Fair warning.

Description of Work
We were told this is a top moving company by several people, but we had such a bad experience I decided to write a review. To start with they billed themselves as a top quality moving company who handles jobs where antique furniture, expensive lighting fixtures, fine art, etc. The problems started immediately!

It went very smoothly--on time and on estimate with no damage to furniture.

I have hired, or advised clients to hire, Padded Wagon off and on since 1986. In general I have always been happy with their work; I do think that they are a little expensive. In addition, not all of the individual workers are equally professional. I would recommend them, but would also suggest checking out some of the competition.

Description of Work
Moving from one apartment to another within New York City. Prior to their internal split (see New Yorker Warehouse) I used to store with them as well.

The move was as promised and the movers were great - nothing was broken and the supervisor provided boxxes before the move to make things go quicker. The only issue I have with Padded Wagon is that I thought I was billed too many hours for the drive to the storage facility and back - I make the round trip in 10 hours (without traffic) - I was charged for 18.5 hours. they did have to unload but that took less than an hour. When I inquired I was told that they had to stop at weigh stations, traffic, bad weather, etc. I believe that these things were a factor but I aslo believe they got lost as the drivers called en route to clarify directions. I let the supervisor know that I did not want to pay for the time they were lost. After a promise to get back to me and after emails and voicemails I was never called or emailed back with an explanation. This is what I was upset about - why not address the issue? I have used Padded Wagon before and like the quality of their drivers. Problems and issues come up in any business -how you address them (or in this case not address them) is what makes for good (or bad) customer service

We dealt with a Northern NJ office of the Padded Wagon in Parsippany. Unlike most of the movers we contacted, they were readily available for consultation by phone. They were prompt in responding to our request for an estimate and their estimate, though not the lowest, was near the lower end of the cost spectrum. They arrived ontime and took great care in packing and loading our belongings. Initially, there was some difficulty in scheduling the delivery from NJ to NC. But in the end, they simply filled a small truck and delivered our bleongings the very next morning.- even before I arrived in NC. Fortunately, my wife had arrived the day before. So by the time I arrived, they had unloaded and distributed almost the entire truckload, even working in considerable heat and humidity. Everything arrived in pre-packing condition and there was no damage to either the home we left or the new home we moved into. The final cost was a little higher than the estimate, which was quite reasonable considering that we added a few items to the move and had other items stored as well. The movers provided one additional bonus. It is difficult to dispose of unwanted funiture and household items in Northern NJ. Even when donation is possible, pick-up is difficult to schedule and unreliable. As a result, we needed to hire haulers to clear out all the unmoved items so that the house could be cleaned prior to the buyer's inspection. However, one of the movers saw the items we were disposing of and offered to take several (high-quality) mattresses, small appliances plus lawn and garden tools. We were happy that someone was able to use these items and that they didn't end up at the dump. We were happier still that the haulers didn't have to charge us to haul them away. Overall, our expierience with the Parsippany Office of the Padded Wagon was quite positive and we would highly recommend them to anyone needing to move within their Eastern seaboard area of operation.

Description of Work
The movers provided an estimate, packed more than half of our household belongings (roughly 4-5 rooms worth), loaded and transported them from Morristown, NJ to Southport, NC. In Southport, they unloaded our belongings and distributed them throughout our new house. In addition, they loaded and are currently storing a bedroom set and sectional sofa in Northern NJ.

Not completed yet but will be in a month.

Description of Work
Packing a 2 bedroom, 2 bathroom apartment. They moved a portion of the furniture to a rental apartment, another portion went into their storage and a final few pieces have been set aside for another pick up. In another month they will bring all items to the final location. I have used Padded Wagon for 20years and have always been satisfied. Even when they once broke a glasstable top; they replaced it without a fuss. They are responsible and fair.

They were professional - wasted very little time and did the job. We would highly recommend them if you have a move, especially if the move is complex ie to different locations. We were very pleased and there was no hastle. Moving can be very difficult - Padded Wagon made it as painless as possible.

Description of Work
Padded Wagon packed and moved our household to two different locations. It was a complicated job with many steps to climb and building hours that had to be observed. They packed one day and moved the next. They got it all done.

The Padded Wagon was a very good company. I was impressed with their professionalism, courteousness, and neatness. This company was very responsive and helpful in helping me and answering my questions. I would highly recommend them.

Description of Work
The Padded Wagon moved my household belongings from Staten Island to Manhattan which is about 16 miles. They did not do any packing of unpacking for me and nothing was broken or damaged.

THEY DID A GREAT JOB. THEY SHOWED UP ON TIME AND THEY GOT THE JOB DONE VERY QUICKLY. THEY GAVE ME A FREE PRICE QUOTE. THEY DID BREAK SOMETHING BUT I DIDN'T TAKE ANY ACTION AGAINST THEM BECAUSE I DID NOT SEE IT AS A BIG DEAL.

Description of Work
THEY MOVED ME TEN BLOCKS AWAY FROM MY ORIGINAL HOME. THEY PACKED EVERYTHING AND THEN THEY UNPACKED ALL MY THINGS IN MY NEW HOME.

Mega Move is a licensed moving company that is striving its best to align its services with the highest standards of quality and trust in the industry. Being locally based, we are well positioned to help our customers with their moving needs and offer them concise and flexible solutions.Moving isn't a straightforward job. There always going to be situations beyond your control and expectations. A well sorted plan and the ability to cope with such circumstances, is what makes all the difference.People at Mega Move are experienced professionals, and have seen the bitter side of it. Their experience and cutting edge methods ensure that no matter how bad it gets, your interests remain at the forefront.  …

Hard work and a commitment to quality are a way of life at NYC Great Moving. We use state of the art technologies to ensure the safety and security of our clients’ belongings and our efficient, courteous estimators, packers and drivers are carefully chosen and trained. Please call us for a free, on-site estimate, and let us show you how much better moving can be. We look forward to making your next move your best move. Additional DBAs - New York Great Movers, Great Moving Inc  …

How is THE PADDED WAGON overall rated?

THE PADDED WAGON is currently rated 4 overall out of 5.

What days are THE PADDED WAGON open?

THE PADDED WAGON is open:

What payment options does THE PADDED WAGON provide

No, THE PADDED WAGON does not offer eco-friendly accreditations.

Does THE PADDED WAGON offer a senior discount?

No, THE PADDED WAGON does not offer a senior discount.

Are warranties offered by THE PADDED WAGON?

What services does THE PADDED WAGON offer?