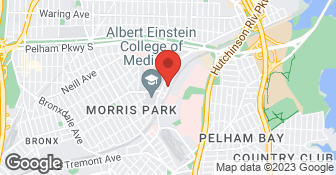 We are the company specialized in local, long distance, household and corporate moving. Northeast Movers provides high-quality moving services to thousands of customers each year and our main aim is the satisfaction of the people who trust us.Northeast Movers is a company committed to fair and low prices. We provide support and customer-care services 365 days a year. We always do our best in order to provide the best moving services and that is why our company has of the highest rate of returning customers in the relocation industry

The movers came very late and were there until almost 2 am. I can't say they did not do a good job until I start to open my boxes which they delivered close to 3 weeks later from the 7-10 days listed in the contract. When I opened my box, some of them have so much paper that I, being a 5'1" person was able to carry boxes that were almost bigger than I. I had almost 20 bags of paper, pressed down, jumped on to make them fit in less bags. The junk that I told them that I will not take with me, old shoes, empty bottles of nothing, they pack all of them. I found myself throwing out junk when I got to my new place. I was there telling them what to pack and what not to pack but the minutes I turned my back, everything went in the box, that being said, more boxes, more space taken in the truck, more money to pay them. People sounds nice on the phone as they want the deal but once the deal is done, you dealing with different kind of people, from Northeast movers, they became All Inclusive moving, When I left a message for the same person I spoke to for more than 10 times, concerning the fees charged, the delivery of my stuff, my calls were no longer returned, I was transferred to another set of people. Before one moves, make sure you get all information, size of boxes and how much can be fit in them and how much can fit in the truck, how much space they will take and how much $ per space (inches, foot, etc.). Also, what are the extra fees that may be charged, And they expect after all this for tip for the movers because I don't believe the movers are working for the company, at least some of them don't and depend on the tip.

Description of Work
they moved me from NY to Maryland. The contract was 7-10 days, it took almost 3 weeks of last minutes cancellation and I had no furniture in the new home. they waited until they had another person moving to make sure the truck is filled but all on my time. From the quote I was charged, I removed most of the things on the quote but ended up paying more than twice the quote.

This was a terrible experience from beginning to end. This is an interstate mover who repeatedly did not show up to pick up our furniture when they said they would, and then repeatedly did not deliver them to the destination when they promised. Because the pick up location was 2.5 hours away from where we live, this required multiple trips and many hours of wasted time. On the delivery side, the delay resulted in our son not having furniture for a 2 week period. Communication around the delays was suboptimal, and the company did not respond to phone calls repeatedly, which was very frustrating. The "reasons" for the delays were many and varied, and it got to the point where we simply did not believe anything the customer service individuals told us. The actual movers were nice people, and helpful. But the lack of communication and poor service from the client service department of this company were really quite poor. We have used many moving companies in the past, and have never had an experience like this. We will never use this company aga

Description of Work
This company took an inventory of items to be moved over the internet, and transported them from one state to another.

Clutter is your one-stop-shop, providing the most affordable, flexible, and reliable moving and storage services nationally. Moving: Clutter’s professional moving experts provide high-quality local moving and packing services to you. They help you disassemble furniture, pack, and load your items safely into a Clutter moving truck. With Clutter’s account portal, you can track the progress of your move, get to know your movers, and see when they have finished your move. They offer flexible moving options, so you can also choose to pack your items yourself. Smart Storage: Our on-demand storage service means our professional moving experts come to you, pack and store your belongings, and return them whenever you want. Clutter photographs and categorizes each item in your catalog, so you always know what you have in storage. You can request any items back with the click of a button, and Clutter’s professional team comes to you. With a variety of storage options from 5’x5’ to 10’x50’, you can pick the size that best fits your needs.  …

Hard work and a commitment to quality are a way of life at NYC Great Moving. We use state of the art technologies to ensure the safety and security of our clients’ belongings and our efficient, courteous estimators, packers and drivers are carefully chosen and trained. Please call us for a free, on-site estimate, and let us show you how much better moving can be. We look forward to making your next move your best move. Additional DBAs - New York Great Movers, Great Moving Inc  …

We at TDY Moving & Storage New York are a family owned & operated moving company that has been running from generation to generation, serving our customers in the same professional manner. Our staff have many years of experience in the moving and storage business, offering you peace of mind through all of our services. We offer storage, local moves, international shipping, and packing supplies. We also handle antiques, pianos & valuable art work. Call us today for a free quote! 347-535-3131 or feel free to email us at info@tdymoving.com  …

North East Movers is currently rated 1.5 overall out of 5.

No, North East Movers does not offer eco-friendly accreditations.

No, North East Movers does not offer a senior discount.