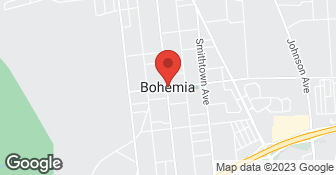 Several years ago we used “1-800-Paint-Job” to complete an exterior paint job that had been started by another contractor (a one man “firm”). This contractor disappeared when the job was partially finished. The job was to prepare and stain the wood shingles that had been installed and allowed to “age” (exposed to the weather) prior to finishing. “1-800-Paint Job” completed the job in a rapid, professional fashion and we were very pleased with the work. CURRENT JOB In December, 2012, we hired “1-800-Paint Job” for interior painting in our older home; many of the walls and much of the woodwork date to the 1920s or earlier. The age and condition of the home required extensive prep work before the painting could begin. The contractor and his crew spent a great deal of time sanding and spackling so that both the walls and work trim were in near new condition. Included in the work were risers and stringers of a staircase. In addition, the wood floors had been recently refinished and needed to be protected during the entire period the painters were here. Prior to beginning, we discussed the paints that could be used and the pros and cons of each with Gary. We also were able to discuss the details of the contract and had a clear understanding of what was included and the time frame for the job. Once work began, the contractor’s crew worked neatly, cleaned at the end of each day, and adjusted their schedule to ours. They finished within the time estimated in the contract. Gary (the and quot;ownerand quot;) stopped in every day to discuss the job with us and whether any changes neded to be made.

Obtained 3 quoted for the job, $2000, $3750 and $5500. Went with 1-800 PaintJob/s $5500 based on the quality of thier multi-page estimate and warranty, or as the quote says with and quot;Estimateand quot; crossed out and in its place in over-sized boldface type and quot;Our Promiseand quot;. Estimate, er sorry, 'promise' states all material will be supplied. Does not speicfy brand of paint - whether high or low end paint. Not sure what happend to the $110 box of cedar shingles we supplied, never saw them again, no mention of them and wasn't compenstated for them. Job was started before superstorm Sandy, when the storm came, 1-800 was nowhere to be found after several phone calls to secure thier painting equipment in preparation for the storm. Finally it's determined that the owner is in Florida! I guess he's not helping secure the ladders for the storm. Finally got in contact and put the equipment in our shed. Hmm, guess that also means this job isn't being performed or even supervised by the owner, he just writes up the quotes, er sorry again, the and quot;promiseand quot;! Not a bad gig! No one bothered to check the house or to remove the tattered, trashy looking ripped plastic left taped over the windows after the storm or promptly schedule the continuation of the job. But that's not the real problem, which is the prep wasn't performed properly, instead leaving the loose wood that results from scraping cedar siding, that was left on the building and just plastered onto the house by application of paint. The result is a shabby, rough surface filled with scraping debris. Frankly looks like sh*t. This is what I'd expect for $2000 not $5500. If you've ever scraped cedar siding, you'd know loose wood pieces and wood 'fur' for lack of a better term, results, requiring at minimun some type of even a gentle hand sanding would remove. What quality of hired help wouldn't even know or realize to do that??? Upon pointing this out to Gary, by self admission he didn't coordinate properly with hired hands whether the pre-paint prep was ready for the paint application phase of the job. Very calmly and professionally we were told it would be repaired, problem is, it wasn't. In a single additional day the job was 'finished'. Looks like another layer of paint was applied to try and cover up the problem, but it wasn't redone or properly rectified to our satisfaction. We were offered a couple hundred bucks off - for a fatally flawed job, and that was over priced to begin with. Whadda deal! Other miscellaneous: The gutters were to be cleaned as per contract, but it had to be pointed out that they were not after the job was claimed to be finished. For $5500 you won't get your shutters painted or gutters offered to be painted as the next lower priced quoted job did. If you want a $5500 Paint Job where the owner doesn't even perform any of the work involved, neglects supervision but instead leaves it to grunts for sub-par work then be my guest. Moral of story is: If anyone does work on your properly make sure you know whether the work is performed by the person selling the job or by hired hands, but even more importanly, be on site to supervise the work directly yourself. Now maybe I'll go hire some guys from 7-11 and strart charging premium prices - and if I don't get back to you in a crisis, it's probobly because I'm out of state!

Built 1950. Provided a written 2 year guarantee on any defects. Contract specified Benjamin Moore Paints. As agreed, used shingles provided & deduct $110. Ladders secured to satisfaction of owner. I estimate, consult, write quotes & manage several jobs. It is not implied that I perform the labor. As a past client, the reviewer’s mother, member is aware of that. Ripped masking caused by hurricane. After hurricane we finished the job. Touch-ups were addressed to the satisfaction of the owner. A $200 credit was applied for disposed shutters not painted, not because the job was “flawed”. Contract detailed sanding this type of shingles was not an option. Gutters were cleaned prior to the Hurricane. After the storm, the gutters had once again accumulated debris. If notified we would have cleaned again. Purchased & installed 2 pair of shutters. No crisis took place. Our employees are skilled craftsmen w/ years of experience & enjoy a great reputation. Reviewer is NOT the party we contracted with. Pictures on our facebook page look for West Islip Job 2012.
5.0

They were always prompt and worked hard all day. They were very quiet and respectfully wore ear plugs to playtheir radios so as not to disturb the neighbors or me. If it was not for their truck in the driveway and the ladderson the house I would not of even known they were there. They came and left quietly. Extremely professional and if I had a question or needed them to do something - it was answered or handledwithout a fuss. They cleaned-up the surroundings each day before they left. It was a very relaxing and stress free experience which is what you want when someone is working at yourhome for a week,

Member, once again it was a pleasure to work with you. Thank you for the continued trust.

The team at Frank's Painting strives on excellence & repeat customer satisfaction. We have a crew of extremely respectful, trained, clean & neat painting employees. We treat your home or office like it was our own. We only use top premium paints from Benjamin Moore & Sherwin Williams on all our Residential projects. We come very highly recommended and have hundreds of customers that we can use as references. Call us for your small, large or any size project you have in mind. Frank's Painting also offers FREE COLOR CONSULTATION services on any paint job over $3000. That includes (1) Free hour with my certified Interior Designer meeting you at your home, one on one, to help with choosing colors.  …

No, 1 800 PAINT JOB-LONG ISLAND INC. does not offer a senior discount.