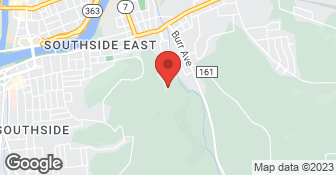 Allow United Construction & Remodeling to be your source for a professional contractor in Binghamton, NY. We offer a full menu of home renovation services from small repairs to complete remodels. Customer satisfaction is our priority, and our goal is to provide quality work at reasonable prices. At your initial appointment, we can give you a free estimate that clearly details our rates. We are a full-phase contracting company specializing in restoration, remodeling, and new construction. Quality craftsmanship at an affordable price. Locally owned & operated. 607-281-6973...

Welcome to Chimney Solutions NY Inc. NY Inc., where for more than 25 years we’ve provided satisfied customers with expert chimney sweeping and and cleaning services at fair and competitive rates. In addition to the thorough inspection and cleaning of oil–, wood–, and gas–burning chimneys, we specialize in the prevention, detection, and correction of chimney system hazards—the kinds of hazards that can endanger the health and safety of your family and home. We use the latest tools and technology to ensure that your chimney system is operating at optimal levels. All of our technicians are up to date on NFPA standards and state and local codes, and ready to address the particular needs of your home. We provide comprehensive, reliable services that have stood the test of time. 2 Employees. Uses Subs For Various Aspects Of Job. Cost Is Determined By The Job. Travel Charge May Apply. Service Charge May Apply. Additional Phone: (866) 607-2446 .  …

Moore and Brown Pressure Washing Service can pressure wash barns, houses, porches/decks side walks and anything else you need cleaned. We also provide full Interior and Exterior Painting services and we're focused on making your home look beautiful. Our company believes in value. We're dedicated to each of our customers and will treat your home as if it were our own. If you are interested in getting anything in your home touched up or repaired we are your people! We are great at communication, just call or email us and we can set up a time and day to come by and look at the project before we give out any quotes. Don't hesitate to call us today so we can come take a look your home!  …

Everything went very well from the first call to completion. Estimator was very responsive, professional and helpful. Project manager and foreman were very good also. The men who did the work were professional, considerate of our home, polite and did a great job and great cleanup. We have an estimate for vinyl fencing installation and will use United Construction again for that, in the spring.

Description of Work
Had 2 layers of roofing removed, some plywood replaced and a new roof installed on the front of our house.

Thank you for the great review! It was truly our pleasure to work with you on your roof and look forward to installing your fence in the spring.
5.0

The crew arrived and started the work at the time agreed. When the old roofing was almost removed, the foreman of the crew, Dave Cook, approached me to show the condition of the old roof base. I knew that we may have to address that after years of small leaks that had occurred. Dave told me what my options were and how they would affect the long term results and we decided to lay down a new decking over the existing one. I was promptly quoted a price and put in touch with Becca at the office to authorize the Change Order. I had to leave for work after that feeling the I was in good hands. When I came home from work the new decking was almost completely installed and the base layer was soon to follow. I saw how careful the base layer was rolled out to eliminate any creases. It was getting late and the forecast was for rain to come in later that night. Dave told me that they would stay until either finished or at least the roof would be flashed and water tight. When it got dark, we found some headlights for the guys to were so that they could see well enough. The roof was made water tight with one bit of roofing to be adhered. There was not enough flashing in the trailer to finish without a seam and Dave wanted to finish it with a single piece. I agreed. The weather turned to rain and clod for the next week and was not able to finish until the following wee. During that time either Dave or Becca would contact me every day to let me know what the plans were so that I was not in the dark. I really appreciated that. Overall my wife and I are very please with the professionalism, quality of work, cleanup, and communication. We will definitely use them again and recommend the to anyone.

Very impressed with United. They came the same day I called to give me what proved to be a very accurate estimate. Once I signed the contract they quickly followed up with a date and even adjusted the time to suit my schedule. Caleb introduced himself, did a thorough and quick job, and explained everything, walking me through what he'd done and showing photos. I would not hesitate to use them for a larger job in future!

Thank you, [Member Name Removed]! I will make sure the guys know how happy you are with their work, they love hearing good things!
1.0

Retracting earlier reviews which were premature and trusting. Almost 12 months later, UCR's new roofing system continues to leak - with leaks sprouting from any number of locations.Suggestions to locate the cause were ignored - we've since hired professional inspectors to investigate.Since our original review, UCR has stated they believe they've been more than patient trying to complete the job to our satisfaction. However, giving up, as they've written, indicates UCR was never capable of doing they job they were hired to. Reaching out, as they phrased it, consists of nothing more than a barrage of home visits and phone calls - while the repairs and replacement they've attempted continue to degrade physically.

[Member Name Removed], we are also extremely frustrated by your cathedral ceiling issue and hurt that you have chosen to negate your original review. We feel we have been diligent and responsive to all your concerns, having always scheduled a visit and sent a technician anytime you have contacted us, and always conducted an office follow up call after any services. We have made every attempt to amend the situation and have attempted to contact you multiple times to follow-up on the situation; unfortunately to no avail. When others would've given up, we have continued to work for you. we would be happy to come back out again and look forward to scheduling this with you once we are able to speak with you over the telephone.
5.0

Very professional, discussed all repairs found upon on tearoff not on estimate. The project manager reviewed all work after the job was completed and discussed everything before the final payoff. Exceptional cleanup, even checked for nails with a magnet and covered up the hot tub. I will definitely hire this company again.

Thank you for the opportunity to work with you on this project. I will pass on the praise to our crewman, it really means a lot to them to hear a satisfied customer! Please let us know if we can be of any service to you now or in the future!
5.0

I was so impressed with everyone I worked with from start to finish. Earlier this year we had someone come and do a patch job on our roof which was in awful condition - they didn't try to sell me a new roof, encouraged us to get by for as long as we could and were upfront about what they were doing, how much it would cost and how bad our roof really was. We finally took the plunge after some bad leaks and had Jim come out and give us an estimate, he explained everything in detail and gave us a phenomenal price. When the crew came over to do the job I was amazed - they were so efficient and quick!! David, Miguel and Teamo kept us updated every step of the way and ray delivered some not so great news like a pro. We've recommended these guys to everyone we know - they are trustworthy, fast, and do amazing quality work. You will not regret your decision to hire these guys to do a job.

They did a great job and the crew was very courteous and respectful. They also did a good job with clean up afterwards. They were prompt at getting back to us with any questions. They were thorough with making sure all our needs were met and the job was complete.

Description of Work
A new roof and gutters on our house.

The workers did an excellent job. I'm extremely happy with how everything turned out. Even my neighbors comment on how great the work turned out.

Description of Work
I needed a fence installed, a paved concrete driveway, and a new garage built.