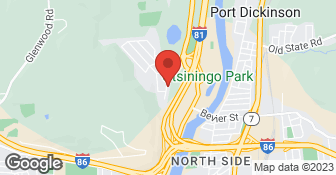 Based just outside of Binghamton, Ny. We provide beautifully landscaped outdoor living spaces, custom designed and installed. We offer complete landscaping and hardscaping services including hydroseeding. Whether the project is large or small, we recognize the importance of dedicated service. Our mission, is to provide creative landscapes that go above our customers expectations while maintaining the highest standards of craftsmanship.  …

We specialize in all phases of remodeling and handyman work for your home, business, bathrooms, kitchens, finishing basements, and more! We guarantee your satisfaction, and we won’t leave until the job is done right. We pride ourselves on the quality work we provide, while delivering great customer service! Check out all the services we offer below and call -or- click to schedule a free estimate today!  …

Description of Work
Tony reviewed our architect plans and submitted a bid for our addition. We checked multiple references and they were all good, but their bid was more than we were prepared to pay. All our communications were professional and if we have another construction opportunity, we would ask them to bid.

We're sorry we weren't able to help you with your project! We hope that the contractor you chose to use provides you with the best possible quality and service. We look forward to speaking to you for any future projects you may have!
2.0

Never got off to a start! did not respond to Email correspondences!...

Description of Work
no work was done!

We are so sorry to see that you had this experience with us! We're unsure what email address you used to try to contact us but we would like you to know that we now have a new Office Manager to help things run more smoothly. Because of your poor experience, we would like to offer you a 10% discount on any project you may need. Contact our office manager by phone to redeem this offer. We would love to have the opportunity to correct this oversight!
5.0

They have been amazing so far. home is still under construction. Right on time minus a few days due to weather. Tony has been been great to work with. Very professional, meets with us weekly at site . Almost daily contact with them. Have been very upfront with everything I love the fact they say a certain thing will happen this week ,i.e. this week the basement floor goes in, and it does go in this week not 3 weeks later . Construction is quality. Very pleased and would cheerfully work with them again and recommend them to anyone.

The driveway was not put in so that we can turn and back the car into the new garage. We are still waiting for that to be corrected. **The existing invisible dog fence was dug up and cut during the driveway excavation and still hasn't been fixed. *The new garage was supposed to be large enough to accommodate one car and a large lawn mower with a separate garage door on the side of the garage with a ramp for that mower. When the footing was laid and walls put up we found the garage wasn't large enough for the mower and they hadn't framed out the side garage door. I had relied on Tony, their rep, to design the garage to fit what we had planned. Now I don't have the room to store the mower (part of the purpose for the new garage). *Before the roof to the garage was put on they had removed some bricks from the house on that side below a window. We had rain several times which leaked into our basement and left about an inch of water on the floor, ruining some of the things we had stored there. I spent several days after each rain mopping up water and moving boxes. *I asked for small windows in the front garage door, but they were and quot;forgotten.and quot; They did finally change that panel. *They put in the closet for the divided room and had the shelf above the clothes hanger just 6and quot; from the ceiling. We had that lowered so we could reach the shelf and things could be stored there. *They didn't get an electrician to wire the downstairs room that was walled off, which caused a week's delay while Tony came and did the wiring himself. *I am still waiting for the railing to the basement to be tightened and the wall repaired. *The ceiling firewall of the existing garage was installed, but the garage door opener hasn't worked well since the installation. It's not working now and we are waiting for them to come to fix it for the second time. *I will say that the workmanship was very good, the one man that did all of the work very friendly and professional. It shouldn't take nearly 7 months to complete this work. Even the neighbors commented on how long it took to put up the garage. The planning of the garage didn't work out at all. I only got apologies and no deduction in cost for their mistake. Tony didn't check up on the work being done, didn't plan for what I had asked and offered no deduction for his mistakes. I would not recommend this contractor to anyone. 5/2013 Update: The contractor did come out and fixed all of the above problems. He offered to extend the garage another 18and quot; to accommodate the mower, but at that point I didn't want to have more work on the house. I wasn't sure it would be enough to fit the mower and I still wouldn't have the side door that was originally planned. The workman had been fired for slacking and not being on the job when he was supposed to be there. Still, it was not a good experience for me this time around. I thought the amount paid should have been lowered, but that was never offered.

Description of Work
We had used STP about 10 years ago and loved the work they did enclosing a porch. This time we had a different house and needed a garage with driveway, a wall and closet to divide a room, a railing down the basement steps, install grab bars in the shower, under deck drainage system, repair to changing room ceiling, new roof on the pool shed, fix patio cement and epoxy the patio area, and firewall installed in one bay of the existing garage ceiling. We got an estimate, but it wasn't broken down by anything other than what was owed at the end of each section of work. Work was started in October 2012 and it's now April of 2013 and the work is still not completed. We haven't seen the workman for 2 weeks.

The job was done quickly and in a very professional manner. The workers were extremely hard-working, respectful and polite. They protected the landscaping and decking and cleaned up all remnants of the roofing materials. Our only disappointment was that it took several more weeks after the roof was done for the gutters and downspouts to be installed. But overall, we were very pleased with the workmanship of the completed job. We have recommended STP to our friends and will continue to recommend them.

They were way out of line for what I wanted to have done. I had estimates at $17,000 and $25,000 and theirs was at $45,000 and that wasn't counting the appliances. All the others were counting in appliances. They were knowledgeable and knew what they were doing, they've been around a long time.

Description of Work
I got an estimate from Southern Tier Permaside for a kitchen remodel.

It went well. There were some permit problems, but that was due to some problems with the local town's changes in permit regulations. The work was done a very long time ago, so I really don't remember if there were any other issues.

We had used Southern Tier Permaside to peform smaller jobs, e.g. build a deck, replace an exterior door and reconfigure our stairway to the second floor of our home. We decided to add an enclosed three season porch to replace our deck. I contacted Southern Tier Permaside and we met to explain our ideas for the project. They took our information and came back with a proposal. We met to discuss and accepted their design with some minor changes. A detailed contract was presented and we accepted it. The work began on schedule and was completed on time. They did an excellent job constructing our room. We have been extremely happy with the job and the final results. We use the room daily from April to November each year. It has added a comfortable living space to our home and we receive many compliments.

We were told we would receive a phone call with in the next few business days from the day we met with the rep. and would receive the estimate for the job. We never received a phone call or any other communication from them. With this being said, we decided not to pursue them and go with someone else.

Description of Work
Had a representative from Southern Tier Permaside come out to our home to give us an estimate on new siding, a new window, and to repair our porch.

We met with the contractor several times to discuss options and ideas. He made a proposal that we liked and decided t move forward with the project. The contractor did a great job. The project was finished on time and to our specifications. Many positive comments from people who have seen the room. Workers cleaned up the site at the end of each day and hauled away trash. I have hired this contractor to do other jobs for me. We use the room almost daily from April through November. We have even used it into December during the holidays.

Description of Work
Contractor removed existing deck and replaced it with an enclosed three season room. The room is 14x16 and has tongue-and-groove pine, plenty of glass and screens, cathedral ceiling with two wood beams, carpeting and is attached to the house.