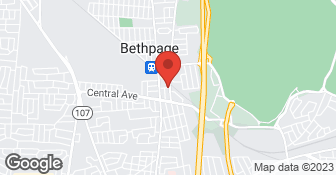 Founded in 1963 as R.D. Washer & Dryer Service we've been a family owned and operated business ever since. We are a father and son team, second and third generation technicians, and we are trained professionals. RD Appliance Service has been serving Long Island and Nassau County for over half a century. We service all brands of appliances including Whirlpool, GE, Maytag, LG and Samsung as well as Miele, Thermador, Viking and Bosch. We are trained and up to date on the latest innovations in home appliances and appliance repair training and we have access to the much needed technical information required to service today's highly complex machines. Our technicians regularly attend appliance repair training seminars on new products and continuously update their technical knowledge. Eddie has a degree in refrigeration technology and has been a technician for over thirty years, working side by side with Ralph, his uncle and the founder of RD. David has been a technician for over thirteen years and regularly contributes articles on service to Marcone World Magazine, the appliance service industry's number one publication. We use the latest technology to assist in diagnosing and repairing your appliance problems. This technology also allows us to do our part in conserving our environment by eliminating paper invoices. We are members of United Servicers Association as well as Marcone Servicers Association and hold ourselves and our work to the highest standards. Our appliance repairs are fully guaranteed for one year, and we keep our trucks stocked with all of the most common parts so most repairs can be completed on the first visit. Why use us? As technicians and owners we perform appliance repairs with the same quality and care that we would in our own homes, so you can rest assured that the repair will be done right. For us this isn't just a job, it's a way of life....

Attempted Financial Beat Down...STAY AWAY!!! I experienced the most unbelievably underhanded experience I have ever had re: a service business in my home...I urge you to read this and tell everyone you know about this to stop this egregious behavior: I called RD, found them online, because the display was out on my microwave (upper part of a wall oven/micro combo unit). I was told that to come by and diagnose it would be $165 ($179.23 w/ tax). Also, that if I deceided to use them for the repair none of this would go toward the job...I said ok. The technician came by, pulled the unit out of it's cabinet using his appliace dolly (great little tool) and diagnosed the problem in under an hour. I needed 3 little micro switches that cost about $15 each, plus shipping of $16. I said "great," how much is the labor (which would be 30-45 minutes tops) an he said an additional $220....I said "great," please order the parts and lets do it...and then it happened...get ready because I promise you won't believe any professional business could have a pair large enough to say this...he said, "plus $140 for the dolly!!!!!!!!!!!!!!!" I thought I misheard, so I said please repeat that...and then, amazingly he said it again, "plus $140 for the dolly!!!!!!!!!!!!!!!!!!!!!!!!" I asked, "you mean the little appliance dolly you just used to remove the unit so you could diagnose the problem?" He said yes...to use it again for the repair would be an additional $140 over and above the labor of $220. I said it was absolutley insane to pay extra money because a professional has the tool required to simply perform his job. Plumbers don't charge extra to use a wrench, and painters don't charge extra to use a paint brush...this is by far the most absurd charge I have ever heard of in my life...attempted financial rape since they think they have you, since you can not repair the issue without them. Well I did! I simply called another appliance company and sent them a copy of my invoice. I said I was happy to pay them everything I would have paid RD WITHOUT the ridiculous and insulting dolly fee of $140 and they were happy to perfom the work. They also agreed that charge is shameful. You can look at the actual dolly ([*** Link removed ***] I tried...I called RD and said I'd be happy to use them if they dropped the dolly fee, I explained my feelings on it, they would not. They insisted the dolly allowed them to send one technician instead of 2 to save me money. I had to remInd Alexis that NO, the little dolly allows you to have 2 techs on 2 jobs at the same time, so it doesn't save me money...it makes you more money (that little dolly is worth every penny, roughly $500 on the website). I urge you not to help compensate anyone in life that attempts to take such advantage of a homeowner in a situation where they think they have the upper hand. In closing, remember: if your landscaper charges you extra money to use a lawn mower...it's time to get a new landscaper! I wanted to leave -0- stars but the system would not allow me to.

Lol. Normally we take negative reviews very seriously as they indicate something we've done wrong and give us an opportunity to correct it. I lol'd because in your 9 min phone call to us you said multiple times that you were quite pleased with everything. At about the 30 second mark you stated, "Eugene came to my house, Eugene is awesome, he's so polite and professional and he's a genius and I love him and I was extremely happy." At 4:53 our customer service rep asked "So across the board our company has been fantastic?" to which you replied, "Yeah, every single thing". And that kind of positive language is sprinkled throughout the phone call, I'd be happy to send you the audio file. So the issue seems to be you don't want to pay what we charge, which is of course something you're absolutely entitled to do. You declined to proceed with the repair, and that's that. A certain percentage of customers decline to move forward with repairs for a variety of reasons and that's totally normal. What I take issue with is you attempting to bully us into giving you a 24% discount by threatening to leave a bad review. In your first phone call, at 2:25, after our customer service rep explained why we charge for the use of specialty equipment, you said, "I don't even know how to do a review or whatever, but I'm gonna learn, and I'd rather it be for good than evil, same thing with whatever Yelp is, and I gotta call *appliance dealer* and speak to him and tell him what's going on..." Yes we charge for the use of specialty equipment, your "disagreement" with what qualifies as specialty equipment is ridiculous because that opinion is based on nothing. This is standard practice in any business. When our office called you to offer you 10% off you declined it and again threatened to leave a bad review if we didn't give in to your demand of a 24% discount. You equated charging for the use of special equip to rape. This statement is very offensive and you should be ashamed of yourself for speaking to our rep that way.
5.0

The company scheduled me for service only two days after I called. The owner David and an assistant showed up promptly within the window, and were very professional, courteous and thorough. Within 40 minutes they had my high end exhaust hood working as if it were brand new, and the price was very reasonable. They will be our go to appliance repair service from now on.

Thanks for the great review!
5.0

Hello [Member Name Removed], Thanks for the review. Just a clarification, the price for your repair was $235.85 plus Nassau County and NYS sales tax, which totaled $256.19
5.0

My Whirpool Duet washing machine stopped draining on Friday night and started beeping and showing E1F9 error code. I called RD Appliance Service at 7:30 am Saturday morning. They returned my call right away and scheduled a technician visit from 11 am to 2 pm the same Saturday. I got a call from the office at 11:10 am informing me that the technician will be at my place in 10 minutes. The technician rang the door bell at 11:20 am as promised. He disassembled the washing machine and determined that the drain pump is faulty and needs to be replaced. He quoted the cost of replacement as $451 + tax. I decided that it is not worth it and it makes sense to replace the entire machine (about $800 + tax). The visit and diagnostics cost was $85. The technician (David) was very professional, friendly and willing to explain what he was doing and why. He works in a very clean and accurate way. He also gave me recommendations as to which new machine I should be looking for. I will definitely use this service provider in the future.

Description of Work
CAME TO REPAIR MY ICE MAKER, (THAT TOOK 30 SECONDS-THE ARM THAT DRIVES THE ICE FLOW HAD COME OUT OF THE SOCKET). I ASKED IF HE COULD LOOK A THE TOP OF MY DOUBLE OVEN (IT WAS SHUTTING OFF ABOVE 300 DEGREES). HE SAID NO PROBLEM, CHECKED IT OUT AND FOUND THE FAN THAT REGULATES THE TEMPERATURE WAS NOT FUNCTIONING. HE CALLED THE MANUFACTURER, OBTAINED THE COST, AND WAS ABLE TO GIVE ME A DATE FOR INSTILLATION. I WAS NOT GIVEN A BILL FOR THR REPAIR OF THE ICE MAKER OR THE HOUSE CALL AS THE REPAIR OF THE OVEN WOULD COVER ALL COSTS.

I went to PC Richards where the OTR microwaves was on sale for 30% off!

Description of Work
Dave came to my house promptly, He changed the fuses in my 6 year old over the range microwave. He found that beside the two fuses being burn out the magnetron had to be replaced. Dave suggested that I replace the microwave as this part is very expensive. I appreciate his honesty.

Description of Work
Diagnose issue with our DishWasher. They said I have to replace the Panel but that will cost $300+ including Labor.. They will credit the service call charge if we use them repair. We are looking to buy a new one now..

Description of Work
Repaired my washer.

EXPERTS ON CHANNEL 7, CABLE NEWS AND DAILY NEWS! 1437 REVIEWS ON ANGIE'S LIST! NO COMPLAINT WITH BBB OR CONSUMER AFFAIRS! (CALL 800 696-7668 FOR A FREE ESTIMATE) LIFETIME GUARANTEE ON ALL STAINLESS STEEL LINERS AND CAPS. 38 YEARS IN BUSINESS. (3 tour) VETERAN ARMY MILITARY POLICE. EXFIRE FIGHTER. REPAIRED APPROX. 1/3 OF ALL NYC FIRE DEPARTMENTS. LOWEST PRICES GUARANTEED! PRIOR CONSULTANTS FOR BROOKHAVEN NATIONAL LABORATORIES AND THE AMERICAN GAS RESEARCH FOUNDATION IN WASHINGTON D.C. "WE ARE GENTLEMEN WHO CARE" (read our reviews) THANK YOU!  …

RD Appliance Service, Corp. is currently rated 4.6 overall out of 5.