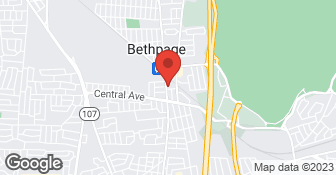 Retail flooring store owned by Brian. Has been serving Bethpage and all of NY for over 20 years. Large selections. Price and service Cant be beat...

We had an awful experience with a carpet installation by Broadway Flooring. When the installers first arrived, we asked that they please be mindful of the walls as they had just been painted. Pedro, the lead guy, assured me that they would be. Then he asked if I had a ladder they could borrow and I complied with the request. I wonder what would have happened had I not had a ladder? I immediately felt we were off to a bad start as they were obviously ill prepared for the task ahead. I will start with a health related issue. One installer wore a mask in adherence to CDC guidelines; Pedro wore his mask as a chin strap. At no time did his mask leave his chin and cover his nose or mouth. At one point he released a sneeze which he made no attempt to cover and it sprayed across my living room. I would have found this disgusting at any time, but during this Pandemic it was both disgusting and disrespectful to me and my significant other. After eleven hours with these guys, they finally finished the installation. The request we made to be mindful of the freshly painted walls had been totally disregarded. One wall looked as if it had been climbed by a bunch of preschoolers with filthy feet. Two other walls were chipped in multiple spots most likely by the steel tool used by the installers. That same tool was also used where the carpet transitioned to the wooden floor in my den which was chipped and dented as no care was taken to protect the wooden floor. I have repainted the walls, but the damage to the wooden floor is irreparable. Photos of the floor are included in this review. I much prefer writing five star reviews, but this experience was subpar in every aspect.

Bay Carpet & Flooring has been in business for 28 years and has a free shop-at-home service covering the entire metro area. We offer day, evening, and weekend appointments - to have samples brought to your home and have your floors measured, at no charge. Check our website (baycarpet.com) for special discounts. Additional service areas: Midtown, Nassau, Rockland, Staten, Suffolk, Union, Upper Manhattan & Westchester Counties.  …

How is Broadway Flooring overall rated?

Broadway Flooring is currently rated 1 overall out of 5.

What days are Broadway Flooring open?

No, Broadway Flooring does not offer eco-friendly accreditations.