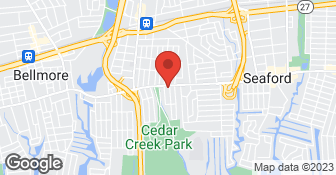 Marshall Tile is a customer service oriented company. Owner does all installations and small jobs are are welcomed....

A small family owned and operated business specializing in tile, marble, and granite installation. I take the utmost pride in bringing the best of Italian artistry and craftsmanship to every project I take on  …

We specialize in all phases of remodeling for your home, business, bathrooms, kitchens, finishing basements, and more! We guarantee your satisfaction, and we won’t leave until the job is done right. We pride ourselves on the quality work we provide, while delivering great customer service! Check out all the services we offer below and call -or- click to schedule a free estimate today  …

We specialize in Hard wood flooring; installation, sanding. Laminate, tile, Vinyl. Also offer services of wall painting, bathrooms and kitchen installation. Moulding, crown molding. We guarantee your satisfaction and we won’t leave until the job is done right. We pride ourselves on the quality work we provide, while delivering great customer service! Check out our services offered and call or click to schedule a free estimate today!  …

Eric cut porcelain tile (outside) for my fireplace to cover the brick and the hearth. He did a masterful job of cutting so that it was symmetrical on both sides. He took the time necessary to make sure it was perfect and I appreciated that. When it came time to install the molding around the hearth, he went to the nearby home depot and brought back molding. When it wasn't right, he went back to the store and came back the next day. Again, the molding wasn't right and he went to another store. At this point I had to wait a week for him to come back (he had started on another job). This time the molding was right but the stain wasn't and he took it back to make it better. Overall, he was determined to get everything just right and although the job took a little longer than expected, he was very professional

Description of Work
The job was to cut tile and install it on the brick of our fireplace and hearth. It also entailed installing molding around the hearth.

Eric of Marshal tile was neat and thorough. He also made every effort to accommodate my schedule. This was a difficult repair of an old mud job shower which was leaking through the pan. His willingness to master a new product meant we could avoid major demolition and expense. Looks great. Very fair price as well. I'll call him first and will wait if necessary.

Description of Work
This was a difficult repair of an old mud job shower which was leaking through the pan.

Things couldn't have gone better. Eric was recommended by a relative, and I plan to call her and thank her profusely for the recommendation. Eric was cooperative and a good communicator from the start. He made an appointment quickly, and he showed up when he was expected. He was respectful and polite from start to finish, and he worked quickly and cleanly. As I explained in the "services performed" section, Eric was scrupulously honest, as well as doing excellent work. We're fortunate that our tile work is in good shape, but we'll need tile work eventually, and we're calling Eric back when that day comes. He's terrific!

Description of Work
Eric re-caulked part of the shower stall in our master bathroom. Considering what we thought was wrong and how much work he could have gotten out of it, we're fortunate that he's so honest. We thought that we had water damage, but he told us we didn't need the extensive repair work we thought we needed. Instead, after he examined the walls in question, he said they were sound. He said the only touch up he might recommend was the caulking he wound up doing. We were silly enough to suggest, when he first arrived, that he might need to re-tile the whole thing and he easily could have made a lot of money off of us, but he's an honest man and told us we didn't need that kind of work done. The caulking itself was beautifully done. He clearly know what he's doing.

Installation of tile and stone in kitchens baths and any other application. Tile repairs and caulking.