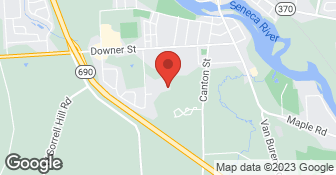 Tekton Construction LLC is a company built on trust right here in CNY. We uphold the trust and integrity needed to treat you and your home with the respect you deserve. From the foundation to the roof our goal is 100% customer satisfaction. We achieve this through the highest level of craftsmanship, attention to detail and effective communication with our clients. Tekton is fully insured & accredited by the Better Business Bureau.  …

At Greystone Construction, each concrete contractor understands the importance of providing excellent concrete services. We know that you need concrete structures that make your investment worthwhile. We strive to always: Provide honest information on every aspect of our services Make fair recommendations based on more than 20 years of experience Offer all services for affordable prices Our hard work in these respects has earned our clients' recommendations and repeated business. We're proud to serve the Ilion, NY area. Masonry; Concrete - Pouring & Repair, Stamped & Decorative, Driveways  …

Robert Bassi came over and gave a quote for $1100. I signed the contract on the 15th of June. I was asked to give a deposit of $550 for the purchase of materials. I wrote him a check with the promise that he would show up the following Wednesday to start the work. He failed to show up that Wednesday and never called to let me know, or to reschedule. I called him and left messages a couple of times. He called out of the blue about two weeks later with and excuse. This became a pattern of habit for the 4 more times. Finally, at the end of August I started asking for my money back. He apologized again and said that he would get me the money back in 2 installments now that he had gotten another job. We set up the first meeting time for him to give me part of my money back, and he never showed up. I still haven't gotten a penny back and am in the process of taking him to small claims court.

Description of Work
I hired him to replace a small portion of roofing in the back of my home.

All facets of construction