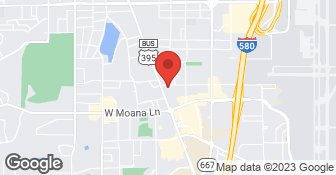 Brite Glass is Reno-based full services glass company founded by two glaziers with more than 100 years of combined glazing experience between them. It is a reputed name in Reno and surrounding areas, known for its award winning animated television commercials and also its coveted glass cleaner. It offers a full spectrum of glass services that satisfy the sales, service and installation needs of customers throughout the Northern Nevada and California areas. Also, it’s Reno Window Showroom at 100 Gentry Way offers customers a wonderful collection of glass products. Also serving and Surrounding Areas of Northern Nevada...

I was pleased with Brite Glass for car windows, so went there for windows and a shower surround 2 months before listing our home for sale. Owner Rob Hardy helped me, said to email window photos and sizes, which I did. He sent my email to Robert Wilson our “manager who quotes and schedules.” It took 1½ weeks to get a call and 2 more weeks to get the measurements for quotes. Then it was 1 quote for windows and shower surround, not split as requested. We had to pay half up front. After 2 more weeks, at install 2 windows were broken (1 not planned to be replaced), so we had 1 badly fogged and 1 broken window, broken glass on our patio, and no shower surround as it was the wrong size. It took Robert 1 week to place a reorder, and 3 more weeks to reschedule an install, at which 1 window and shower surround were the wrong size. After another reorder and 2 more weeks, shower surround and window were installed, but with a sizeable gap in the window frame and torn screen. I got a call to pay the balance, but the job was not done and I wanted to speak to a manager. Hardy called, had our file, was aware of the problems, was “sorry” and just wanted to know when was I going to pay. It was 3 months after we met, our home had been on the market over a month with defects, and the job was not done. Hardy threatened that if I did not pay, he would put a lien on our home which would make it harder to sell. Repairs to the window and screen were not finished until late October and the installer was directed by Hardy to get a check for the balance even though he knew I was paying by credit card. I got 2 calls late that Friday afternoon before Nevada Day weekend that Hardy said I had to pay that day or a lien would be put on our home. So, it was 3½ weeks to get a quote, and 10 more weeks to do the job, with measurement errors, installer damage, repeated delays in reorders which were not expedited, repeated failure to let me know the status, no priority in scheduling after all the delays and, to top it off, Hardy’s appalling attitude of threatening a lien, not offering any accommodation.

Description of Work
2 windows replaced and a shower surround installed

Did not try to sell me a more expensive product but instead informed me of what I was receiving and I felt that was exactly the information needed to feel that the best choice had been made. Courtesy and good overall customer service. Much appreciated.

I have 3 sliding glass doors, all of which are original to a 48 year old house. Brite Glass serviced all three doors and the screen doors with them (new rollers, stainless snap tracks, clean, lube and tune up), put new screen on 2 of the screen doors and replaced the glass on one door. They also built me a pet door in a window screen out of some sort of plexiglass and using a commercial pet door. I was very impressed with the professionalism of the men sent to do the job, and the quality of the work. I have never seen my doors run so smoothly. The workers showed up on time, got right to work and about halfway through a third person showed up and helped. They were finished much more quickly than I expected, showed me how to care for my sliders in the future and then they measured for my pet door and were finished by noon. Apparently my pet door proved an unexpected challenge, and they had to try several times finally using a different material for the door than originally planned. Even though the pet door ended up being more work than anticipated, I was still charged the original price. I originally went to Brite Glass because several different people in the building industry told me they were the place to go. I now see why. They did an excellent job and yes I would use them again.

Best price in town. Due to my high deductible I had to pay the entire bill so was looking for value at a fair price.

We had them come out to estimate repair or replacement of some leaking double pane windows. Two men came out on a Friday, took measurements, discussed options and said the company would email us an estimate the beginning of the next week. After 10 days we had heard nothing. We emailed a request for the quote and have had no response. We are forced to use a different company.

Description of Work
We had several leaking double pane windows that needed repair or replacement.

Quick, no surprises and even though I spaced it and took the tape off too soon they redid the upper corners at no charge. They are now my go-to for glass.

Fine No problems. Ready when promised.

He was on time and repaired the glass per our request and centered on the wall above the vanity.

Description of Work
Took large vanity mirror down, trimmed off edges and replaced on the wall.

Overall it went well. There was some confusion in the initial stages about dates ,but it was resolved and all went well after that.

Description of Work
Cut and installed existing mirrors in different sizes and locations.

Angies List 'SUPER SERVICE AWARD' from 2014 - 2017. BHN LLC (Beautiful Homes Nevada) specializes in custom built insulated replacement windows & doors and 3rd generation insulated siding. To further assist the energy efficiency of our products (and dramatically prolong the life of any roof), we offer solar attic ventilation systems included with most purchases at no cost to you! Our products have the highest energy ratings in the industry with no nonsense lifetime warranties! BHN is also an approved contractor for EGIA financing.  …

We are Tile Liquidators Reno and we specialize in tile, quartz, and luxury vinyl planks. We have the biggest selection of tile in town. As an individually owned franchise we are local, yet have the best prices in town!  …

Brite Glass Inc is currently rated 4.6 overall out of 5.

No, Brite Glass Inc does not offer a senior discount.

No, Brite Glass Inc does not offer warranties.