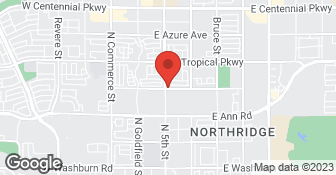 We work with the SNWA (southern nevada water authority) as a preferred contractor and are partnered with THD (the home depot) as a full service home installation C-10 contractor. our company is also a member of the SNLA (southern nevada landscape association). Members of the SNLA take pride in their workmanship and promotion of the green industry with each and every job using the latest water saving products & techniques available.  …

They set my timers for the sprinklers and pruned the trees and bushes. They came out on Tuesday and gave an estimate. He told me the cost would be $50 and they did it right then and there. They were very professional and knowledgeable. He was obviously well versed in his field. Four guys came and knocked it out. It took no time at all to get it all done.

Description of Work
Green Desert Maintenance trimmed the hedges and cleaned my yard.

They are always available. Andres, the owner, is just a great guy. They will show up in a heartbeat if I have an emergency. They are just an all around great service. They will do anything extra I want them to do, and all I have to do is ask. I can't ask for a better landscape maintenance company, and I have been through numerous landscape maintenance companies. I have recommended them to others.

Description of Work
I use Green Desert Maintenance for landscape maintenance.

They are pretty square shooters, I like them too. They do what they say they were going to do.

Description of Work
I used Green Desert Maintenance for landscaping.

Andres and his staff are wonderful. They simpley fix things that are wrong. They know their business and are fair in pricing.

Description of Work
Landscaping and Maintenance. Very reasonable price. They make my back yard look like a park setting. Will do anything you ask. Friendly and responsive!

They come by once a week and do a very nice job.

They are very dependable and always do a good job.

Description of Work
They have done work for us for over three years. They mow our front lawn and trim trees that hang over. They blow leaves and make the yard look nice.

My interaction with Andres was very good. He talks a good deal for the services his company provides. Billing was always accurate and I received the bills on time after the service was performed. He would notify me when it was time to change the timer for the watering schedule. He also helped me replace the pipe when it busted that year we have below freezing temperatures in the valley (although I thought the price was high). He's replanted shrubs and other desert plants when existing plants died (which of course is an extra charge). However, the staff he hires, leave a lot to be desired. They do not perform the contracted services consistently well. They use the leaf blowers, just to blow the leaves around, not blow it into one heap to be discarded, or they will blow it off the property into the street, which still leaves the curb appeal with a disheveled look. They do however keep the lawn trimmed with neat edges. They trim the shrubs, but are not very neat in cleaning up the debris from the trimmings. I also didn't find them to be very good at tree trimmings. I eventually terminated the service due to what I believe was a high fee for the services provided. ($120/month).

Description of Work
I was contracted with GDM for approximately 7 years for yard/lawn maintenance.

They are great. I will continue to use them in the future.

Description of Work
They come every week for lawn maintenance.

The owner is Andres Delgado. They take care of the palms when they need to be trimmed; they take of care of the shrubberies, blow out crap that sits in the drive way and do the basic maintenance in the yard. We have their introductory price which they have kept. We pay them monthly. We have recommended them to many of our neighbors. So they have quite a few of the people in our neighbourhood. We have been very happy with them.

Description of Work
We use Green Desert Maintenance. They come out a couple of times a month. We have used them for 8 years or more.