With Angi since February 2011 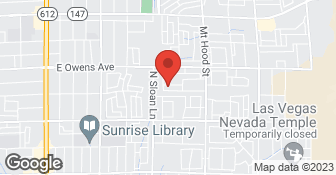 He was latino, but spoke good English. They cleaned up after themselves extremely well. He treated my home as if it were his. They don't overcharge and offer more than others. I would definately recommend them to others.

Description of Work
They tore the bricks down and replaced the broken ones with some new ones. They waterproofed the inside of a large pot outside. They put the lip on it that I asked for. They waterproofed the inside front and back wall. They painted the part that faces my house. When I had issues with dirt from brown stuff leaking out, it was from maneur, but he came back and fixed it. He also put REBAR dolls to make sure that the wall was stabilized and couldn't be moved like it had been. He also reused some of the old bricks.

I purchased the door from Lowes, and PAID for an estimate to install the door which was more than the door cost ($750). I contacted 3 handymen services, of which one never responded, one said they wouldn't touch the job, and the third was BBS Handymen. Eliazar showed up on time, and gave me a labor only estimate $300 cheaper than Lowes contractor. I told him I would call him once the door came in, which was a month later. He and his brothers arrived on time and had the stucco ripped out, the old door removed, and the new one installed by the end of the first day. They returned promptly the second day to complete the job, installing trim, replacing the stucco, and painting. We couldn't be happier with his work, and are now having him paint and tile our new home.

To contact Arizona please call 480-686-7870. To contact Las Vegas please call 702-439-5636 Sunguard custom painting, a family owned and operated business has been beautifying the valley since 1979. Using only premium products from start to finish on each job, we strive to provide a wonderful experience with each customer. Number One rated on Angie's List for super service over 15+ consecutive years!  …

Family owned and licensed #0022932 and #0036959 since 1985 our company motto is Quality Materials & Professional Service. We do not take down payments or deposits payment is made when the work is complete. Additional service area:Clark County Las Vegas Henderson North Las Vegas Boulder City Green Valley Anthem & Summerlin.  …

Our mission is to be a provider that brings back the personal touch with our customers. We will build a relationship that will last a lifetime after you see our quality work. As a locally owned and operated business we feel invested in our clients and constantly strive for customer satisfaction. We won't leave until the job is done right! Call or click to schedule an estimate today! Additional phone is 702.806.0425!  …

Brick Brother Handyman Svc is currently rated 5 overall out of 5.

No, Brick Brother Handyman Svc does not offer eco-friendly accreditations.