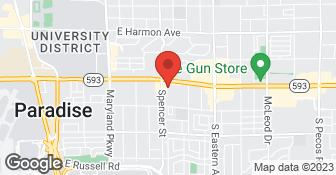 Amazing. Very understanding given the circumstances.

Description of Work
Needed a locksmith

Fantastic! Worker arrived on scheduled time. He was professional in every way. He did a fantastic job. He did the jobs quickly and his manners were very professional. Thanks! This is my second review of this same job.

The actual job went well. He did tell me he would reach out to his contacts/suppliers to see if he could replace the lock for me. I have not heard back at this time. In all fairness regarding the price I need to take responsibility here and say I did not ask for an estimate before he started working. But I never thought it would be $150.00. I thought it would be like 80 or $90.00.

Excellent service and workmanship. Their representative was very prompt and had the job completed in about 1/2 an hour, and was b=very professional and personal. I would recommend this company to anyone needing this type of services.

Description of Work
Re-keyed 6 locks so one key to work all locks.

The person who answered the phone was so professional and helpful. He said I probably didn't need a new door lock, just a repair. Sure enough, Mannie showed up a short time later to remove my stuck key and to do the repairs to prevent future problems. He also showed be how to do WD-40 maintenance to keep the handle and locking mechanism working smoothly. I needed help quickly and wanted someone to do a good job. Anytime Locksmith provided that and more. This retired teacher gives them an A+ !!

Description of Work
My key was stuck in the door, on the outside! Door handle malfunctioned.

He was prompt and quick. And on the other lock examined (which worked but has a minor issue), he recommended not replacing until it worsened. This was a good indication that he was not out for the money but rather for good service.

Description of Work
Fix a lock where the bolt would not fully return. Examine another lock.

He did a good job. This was not our first time with this locksmith, and we'd hire him again if we need more work done.

Mannie was very efficient and professional.

3 locks to be rekeyed, however when asked before their service was purchased, if they could rekey an RV gate they indicated yes, but once there said the lock needed to be replaced.

Ethan was terrific!! I highly recommend him and would use again for sure!! He responded immediately and was professional and clean and very nice.

They were not able to rekey a lock on an RV gate (despite my indicating that was what I had when I called to schedule), so only rekeyed 2 locks. Had to use Half Price Locksmith to replace the lock on the RV gate.

I cannot say enough good things about the service provided by Anytime Locksmith. Mannie arrived on time and immediately began installing my new handleset on my front door. He completed the task within the hour and made sure everything was working to my satisfaction. The deadbolt was definitely much more smooth than before. He even drilled out the deadbolt engagement area as he stated it was previously too shallow and the deadbolt would not full engage and therefore not be secure. I also had him change out my mailbox lock as well as we just moved into the home and wanted a fresh set. I would definitely use Anytime again.

It is a Sunday and holiday weekend in the late afternoon. After getting my keys to my house stolen I called Anytime Locksmith. True to their name, thirty minutes later they were done with re-keying my front door. I got 2 extra keys for being with Angie's List. Omar was the workman and in addition to the new keys he fixed my lock which was never installed correctly so he went above and beyond. All the people I spoke with were very courteous.

Description of Work
Re key lock

I wanted to install a high security lock in my home. I have never used a locksmith and went to Angie's List to review the A-listers. Anytime had the largest number of reviews and almost all were positive. I called Anytime and spoke with Manny. I described what I wanted and he made several suggestions. I chose to purchase the best. This special lock had to be specially ordered and when it did come in Manny called, set a day and time. He arrived on time, gave a friendly greeting, and went right to work. While installing the new lock he pointed out and made adjustments to the door for better function. He then demonstrated how the lock worked and cautioned me about the need to have a hidden spare key near the door in the event of an emergency. Manny answered all of my questions. He told me that the old lock could be reused elsewhere in the house if desired. THERE WAS NEVER ANY ATTEMPT TO MAKE ADDITIONAL CHARGES OR TO UP-SELL! I was impressed by his honesty and knowledge. As a result, I am completely satisfied and plan to use Anytime Locksmith again for my other doors. Now some might be surprised by the cost of the lock and installation, but mind you that this is a special lock, not the Home Depot off the shelf lock, and has several added safety features to prevent picking and unscrewing. I had no problem with the price and was made aware of the approximate cost ahead of time. So if you need a locksmith, go with Anytime, ask for Manny, and you will not be disappointed.

We called and were very happy with the estimate. Within hours Manny arrived on time. Manny was professional and knowledgeable. He efficiently re-keyed all the locks and had me go around with the old key and all the new keys to be sure I tried each one and was sure they all worked as they should. I will for sure be calling Anytime for any locksmith needs. I have already placed there info in my phone in case I or anyone else needs them.

Andy was awesome. He arrived at the scheduled time and even a little early. He got right to work and re-keyed the 5 locks pretty quickly. He made sure I knew what keys went to which locks and ensured they worked before leavimg.

Description of Work
Re-keyed 5 locks, 3 dead bolts and 2 traditional locks due to eviction.

Description of Work
I need my locks changed

He was on time, He explained what he was going to do and how much it would cost. He then completed the work and had me inspect the work before leaving.

Description of Work
I had two deadbolts and one handset rekeyed.

Adam and the fella at Anytime Locksmith are top-notch. They are extremely responsive and do whatever it takes to render excellent customer service. We had Anytime re-key 9 locks on our home. They came on-time, in fact they were early, and did the job promptly. The next day after they left, we notice one of the door locks was not working as smoothly as we thought it ought to. One call to Anytime Locksmith and 2 of their craftsmen came to our home within a hour and fixed the problem. Can't say enough about how good and responsive Anytime was. Definitely a first class operation.

Description of Work
Re-key the locks at our home.

Very fast response time for scheduling, showed up on time, was professional and speedy.

Description of Work
Change out locks to push button locks

I called to make an appointment on a Friday evening (this wasn't an emergency) and they were able to come out the next day. They were punctual, courteous, professional, and were in and out within 45 minutes. They were so nice; they even switched out the battery in one of my smoke alarms (I couldn't reach). They went above and beyond and were very friendly. I would absolutely recommend them!

Description of Work
I moved into a new home and needed about 7 locks re-keyed.

I was worried about how long before a locksmith could arrive and how much the service would cost. When I called them they asked me to text a picture of the lock to them and said that they might be able to offer some suggestions on the phone. Since we were using an uncommon lock they needed to send a locksmith out. They were prompt and reasonably priced.

Description of Work
The hitch lock on our camper failed and could not be unlocked - right as we were leaving on a trip.

Mannie was great!!! Super professional and courteous and got the job done fast and perfectly. Highly recommend them. Great service and overall great communication from the company as well.

Description of Work
Locks re keyed

THANK YOU FOR SUPPORTING THIS AND OTHER VETERAN-OWNED BUSINESSES. An Angi SUPER SERVICE AWARD WINNER for virtually every year since 2006. Including 2021! 22 years of active Military service with an additional 16 years of Locksmith experience. Specializing in: REKEYING of Commercial and Residential LOCKS (and making KEYS), WIRELESS HOME SECURITY CAMERAS (like RING), Commercial and Residential ELECTRONIC and SMART LOCK SYSTEMS, UNLOCKING of most vehicles, Commercial and Residential LOCKED OUTS, GARAGE REMOTES and Programming, Unlocking of SAFES (depending on the type), Unlocking of CABINETS and FILING DRAWERS. FAST, COURTEOUS & RELIABLE services at an affordable price! Feel free to call or text 702-289-5555 any time. Respectfully, Sergeant Smith, MSgt., US Air Force, Ret. Nevada State Business License #NV20131153486.  …

How is Anytime Locksmith overall rated?

Anytime Locksmith is currently rated 5 overall out of 5.

What days are Anytime Locksmith open?

No, Anytime Locksmith does not offer free project estimates.

No, Anytime Locksmith does not offer a senior discount.

Are warranties offered by Anytime Locksmith?

What services does Anytime Locksmith offer?

Are there any services Anytime Locksmith does not offer?