Mike Ulate was the plumber that did the work. He was very professional and polite. He knows his craft well. I will definitely refer him if anyone I know needs a plumber.

Thanks for a great review, [Member Name Removed]. We appreciate you allowing us to earn your business. Our plumber, Michael, is great and he said that you were a pleasure to work with. Thanks again!
5.0

We can only recommend this company. The office called immediately after I posted my needs. For us, time was of the essence and they were able to show up the very next morning, at exactly the time they promised. The job was finished to our full satisfaction within the shortest amount of time possible, at a very reasonable price, as quoted. Brian was great on the phone and Chris is a very personable and friendly professional who knows what he's doing. We would hire them again in a minute, should the need arise.

Thank you for a wonderful review [Member Name Removed]. You were a pleasure to work with and we appreciate you allowing us to earn your business. Thanks again!
5.0

This company should be an example of what once was Excellent Customer Service, as they truly delivered on all points! I was elated to find such professionalism, kindness, & courtesy! From the phone call with Brian who was one of the kindest gentlemen I’ve spoken to in a long time. He had the plumber at my door within an hour! Excellent customer service delivered by both of these gentlemen! Chris R. I’d have to say is the best Plumber I’ve ever had! He’s so kind clean & courteous. Trust me when I say I’m very particular and a clean freak! He was prompt and preformed excellent installation and so very knowledgeable in his trade. Also Chris respected our home and didn’t leave a mess! That’s huge in my book! In other words, I can give enough praise to this company and these two men who make it happen! I feel blessed to have found this company and will be our plumber of choice. I highly recommended them, you’ll be one happy customer as I am!

Great! The plumber was able to determine the problem. We needed to replace the componets of the hot and cold water handles as well as the one for the shower. My fixtures were quite old so he did not have the parts on his truck. He left and purchased what he needed and returned quickly with a second plumber. The water had to be shut off fir entire building (16 units) and he wanted to complete repairs quickly as to not inconvenience everyone unnecessarily. Repairs were made quickly. Very proffesional demeanor. Arrived right on time. I was scheduled between 3&5. He was here at 3 pm sharp. Highly recommend. Price was less then other quotes for the work.

Description of Work
The faucet in my shower was leaking hot water, not really a leak...the water was running like it was turned on.

Description of Work
Easy, smooth, no headaches, no fuss, straight up with me and came sooner than expected. Thanks Chris and we will see you soon!

Thanks for allowing us to earn your business, you were a pleasure to work with.
5.0

They showed-up on time, quickly replaced the hot water tank and answered all my questions. Cost was the national average. Would use again if needed in the future.

Thank you for the awesome review! You were great to work with, thanks for allowing us to earn your business.
3.0

The work was done pretty fast. The major issue for me was that I didn't get a written itemized estimate. Besides an invoice everything was established via phone with the owner, Miguel, and Brian. The workers weren't very pleasant and wouldn't take the time to explain what they were doing. By phone, I was promised that everything would be taken care of by this company, from A-Z: installing the pipe, city inspection and checking after the gas company made connection. They forgot about the last, the shut off was not the one that should have been installed, so the gas comp. had to fix this problem. Never again a job without a written itemized estimate/invoice.

Description of Work
Toilets replaced and a faucet..

Thank you for the great review and allowing us to earn your business. You were great to work with.
5.0

Michael was very professional and he knew what to do and he explained all he was doing. I highly recommend him!

Thank you [Member Name Removed], we appreciate your positive review and allowing us to earn your business.
5.0

I found them to be both professional and honest with the service.

Thank for choosing us and allowing us to earn your business.
5.0

Verry good. They were great. Loved them made me a priority when no one elesa would thank you for all the help. Will let everyone i know to use them. Good people felt like i knew them for ever.

Thank you for the great review and allowing us to earn your business.
5.0

American Brothers Plumbing were the best...needed a new water heater and they responded right away... Within 1 1/2 hours..all was well again. Chris is the best....he was so professional and friendly and helpful with all our questions...will highly recommend this company

Thank you for choosing us and allowing us to earn your business!
1.0

This was the worst experience ever, the service advisor was named Chris he looked at what was going on and told me he would run is snake from the outside first and if that didn't work he would snake the inside. I then asked Chris if he was sure this was the problem his reply was I'm the plumber I was a little surprised by his reply then he said if I don't fix it you won't have to pay. Chris then told me the fee would be $265 so I was going to let him do the work because I really needed this to be done then he told me it would be another $175 for him to run a camera after he unstopped the toilet to see what was going on in the pipes to make sure we didn't have any roots growing into are pipes. I told him I would call my husband which he had already agreed to the $265 but I wanted to see if we wanted to still do the work because of the extra charge for the camera after calling my husband we decided just to get an estimate. When I told Chris, the service advisor that we were just going to take the estimate he got so angry and said I wish you would have told me before I pulled my equipment out I was so surprised because I told him I was going to call my husband about the cost of the camera before he started, but I apologized then he walked by me and said after you call ghetto plumbing you will be calling me back then proceeded to say you won't find anyone cheaper then me. Well Chris I did find someone cheaper and they did a great job and didn't charge me for the camera and I was charged a lot less then $265 I even asked you for and estimate and you told me you gave me a verbal estimate and if I wanted a written one I would have to pay for it. This was the worst customer service but your company lost because the work didn't stop there we need a lot of work done on are plumbing so the other company will profit big thanks for showing your true colors before I invested any money with your company.

Description of Work
I had a toilet backing up into my bathtub.

I feel these reviews are always one sided, and that’s unfortunate. Although I wish you had been a satisfied customer I will verify a few key notes. 1. You agreed to the initial service and then changed your mind about the second service which was COMPLETELY optional, and then canceled the whole job. 2. We do indeed charge for written estimates as they are typically used as a bargaining tool with other companies. However, We do credit back any charges when you call us to complete the repairs. We also price match other companies, when possible. We can’t price match coupon deals, or anniversary offers, like the one you received. 3. And when you asked how he knew that was the issue, his response was “I am a licensed plumber, if my solution doesn’t fix it, we won’t charge you.” That seems like a safe bet, and there aren’t very many companies that offer that guarantee. And I still wish you luck repairing your plumbing, and I hope your current contractors are being Fair and honest with you. If you haven’t done the repairs yet I will offer you a free second opinion and complimentary camera inspection, by me personally.
5.0

It was excellent!! Trustworthy

Thank you for your review! Glad we could help. 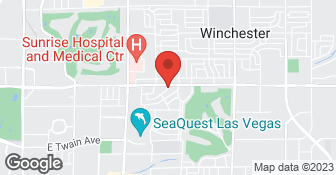 American Brothers Plumbing Company is currently rated 4.8 overall out of 5.

No, American Brothers Plumbing Company does not offer eco-friendly accreditations.

Are there any services American Brothers Plumbing Company does not offer?