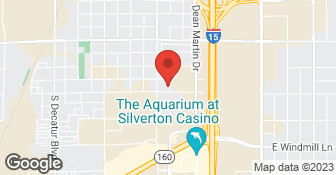 Welcome to All American Landscape. We are a property maintenance company offering both residential and commercial services all around the Las Vegas valley. Our goal is to provide excellent customer service and property maintenance at an affordable rate. Additional email - info@allamericanlandscape.net....

Las Vegas best turf and paver installers, Rock n Block Landscape. Quality, effectiveness, and good customer service are some of our greatest qualities. We are a company with many years of experience. Our hard work payed off, creating opportunities for us in different states. We currently have crews in Nevada, Arizona, San Diego, Los Angeles, Utah, Texas. You will not regret contacting us and start building your new dream garden. Discounts are also available depending on the size of the job.  …

We are a locally family owned and operated company that values honesty, integrity and treats your home as if it was our own. We offer a variety of general services that are customized to each individual project. You will find us to be competitively priced, paying close attention to the details of each project that we are involved with. We look forward to building lasting relationship and guarantee your satisfaction!  …

If you need yard work done well and need it done quickly, call this company. My HOA was really squeezing my toes to replace some plants in my front yard, and they were threatening me with fines if it wasn't done soon. I called All American Landscape and eleven days later the work is done and the HOA is off my case. Jason's crew showed up on time, worked quickly and did a great job. The price was right, too. I will definitely call this company for future yard work and maintenance.

They gardeners/workers would do a good job 1 week then I would have 3 weeks of sloppy work. all they had to do was mow the lawn and blow for clean up. I did the rest. I picked everything up so there was nothing in the way. My door mats, the outdoor rugs etc. I talk with the owner Jason about them leaving a mess after the third week and he said they would not be back. I told him I think it could be fixed with some direction. I wanted to keep them the workers were very polite. I have to clean up sometimes after they leave. I gave it 3 months and Im tired of babysitting to make sure they do their job. Jason the owner should be the one overseeing that. he was rude to me and just didn't care.

It was terrible. They rescheduled our estimate because "the guy" made plans with his child. They were hired to do clean up and maintenance. They had to be told to trim the palms and then only did part of them. They had to be asked to prune bushes. Never did cut back most of the plantings. They did do a really good job of blowing grass and leaves but I could have done that myself!

Description of Work
Yard clean up

Description of Work
aerate the lawn. did a great job!

The extra $20.00 for weed-spraying did not discourage growth of same between visits. I called All American Landscaping on March 6th and left a message; Monday. March 9th, the owner's wife called me and I informed them that I was concerned about the enormous amount of weeds (my laws are covered by small rocks (pebbles). I inquired why I was getting so many weeds as for many months of lawn service I had paid an extra $20.00 to discourage the growth of future weeds. She replied that this "spray" only kills existing weeds. I was under the impression that the extra cost would discourage the growth of weeds, period! Whatever we discussed over the phone did not occur; the 2 men came out as my husband and I were leaving for a doctor's appointment, and the owner's wife had said she would mail me a bill for the $20.00 for pulling all the weeds and spraying a more effective method to discourage the future growth of so many weeds. When we came home later that day, it was dark however, the next day I looked at my lawn and noticed that only some weeds were pulled and others were still there. I called and left a message, again, and next day Jason called and contradicted the whole conversation I had had with his wife; regarding price and weed removal. He stated that they did not pull any weeds (wrong!!!) but sprayed and this would take several days to kill the weeds. I then asked if he expected myself at 74 years old or my disabled husband at 79 years old to clean up the dead weeds, to which he responded that this would not be the case, as they "disintegrate". Jason did come out that same day and after a somewhat heated discussion I decided to continue doing business with them for now.

Description of Work
I only needed weeds pulled and a more permanent weed spray than they used in previous visits. I was paying $100.00 for yard maintenance and $20.00 extra for weed-spraying to kill and discourage the growth of future weeds. (Or so I thought!)

two men arrived on time and went to work. They were Quick , efficient , check all my sprinklers where in working order cleaned up the area very nicely. I asked about a couple of trees that i was thinking of taking out and gave me a very nice estimate. will definitely use them again.

I really like the work they do but don't feel confident in the fact that I won't be charged for extra issues each time they come.

Description of Work
They did do a great job with the lawn service but every time they came I mysteriously had a broken sprinkler and would be charged for repair. I ended up getting the charges reversed for the first problem after a heated discussion with the owner. Then on the next service $90 was charged for yet another broken sprinkler.

We have and still service [member name removed]'s home in regards to the sprinkler repairs there were two billing cycles with extra charges. Over a 1 year period we replaced a diaphragm because itthe station would not shut off and was wasting water. The second time was a poly tubing line that was leaking. This is a property we maintain quarterly so each time we service the property we go through the irrigation very thoroughly. Irrigation is not included in a maintenance bid because it is a repair not maintenance. A 15 yr old home is going to have sprinkler issues.
5.0

Wow! Great customer service really does exist! From the first call to the office to the completed job, the service provided was exceptional. The office receptionist was friendly, prompt in returning calls, efficient and helpful. The owner of the company, Jason Sharman, came to our property to provide an estimate of cleanup/landscaping. He took the time to go over everything and was both professional and knowledgeable. We had the estimate done on a Friday and the work was completed the following Wednesday. We received a reminder call from the receptionist confirming date/time. When the landscapers came by on Wednesday, the owner Jason was with them. He patiently took the time to go over everything with the landscapers to ensure that everything was done correctly. I had a last minute request that he added to the list. The landscapers were professional, courteous, respectful, thorough and very hard working. I was so impressed. The clean-up was unbelievable. They picked up every leaf and cleaned the middle of the street after the work was completed. There wasn't a piece of debris left and they worked non-stop from about 2:45 to 6:45. To say I am impressed is an understatement. I haven't received customer service like this in quite some time. I will definitely recommend to family and friends. Thank you Jason & staff for a job well done and great customer service!!!

Description of Work
Provided cleanup, maintenance/trimming of all bushes & trees, planting of new bushes/tree, maintenance of all sprinklers/drip system, repair of lights on steps.

From getting the estimate to completion of work, they were great. Very responsive. I will be using them from now on!

Description of Work
This particular job they trimmed my palm tree. They did a wonderful job at a great price. The week prior, they trimmed 4 sumac trees, did a yard cleanup and fixed sprinkler system. Adrian was very professional. Again, they were efficient and professional and did a gray job. The trees were trimmed exactly as requested. He listened to what I wanted. Very pleased.

Mr. Sharman gave me a date to send out 2 men to do this job; however, I mentioned that I needed a sooner date to pull the weeds before my Association sends me a letter regarding same. A few days later, I received a call from Mrs. Sharman that they had an opening sooner, and I gladly said o.k. The 2 men came as scheduled and did an excellent job, also informing me that the reason weeds grew so much was due to a broken sprinkler which was shooting out water and adding to the growth. I inquired how much additional cost would be and was told $20.00 each for weed spray and sprinkler repairs. The 2 men worked hard and efficiently and cleaned up my back and front lawn very well. Now I have a badly needed lawn maintenance on a regular basis, either every 3 months or as needed. I highly recommend this company and give them a 5 star rating for all around service and costs.

Description of Work
First, the Owner, Jason Sharman came out to my home and surveyed the areas (front yard and back yard) then I told him what I like done and asked the price for same. I have a big problem with weeds growing outrageously fast and multiple, so we came to an understanding of $100.00 plus, $20.00 when requested or needed spraying of a chemical to discourage growth of weeds; also whenever a sprinkler needs repairing.