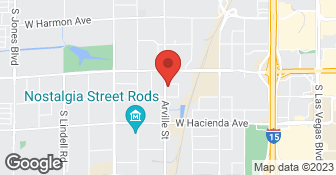 LICENSED FOR OVER 30 YEARS PROVIDING QUALITY ROOFING IN LAS VEGAS. GUARANTEE THAT WE STAND BEHIND WILL GIVE YOU PEACE OF MIND. YOUR ROOF PROTECTS YOUR HOME LET A & E ROOFING PROTECT YOUR ROOF. ...

A & E checked the roof for free, and fixed a minor problem for free as well. The service was on time.

Description of Work
Checking the roof.

Wonderfully done. Looks great and did it in the time frame needed. Other companies were booking 3-4 months out. Needed mine done before Monsoon season hit. Great Job.

Description of Work
Roof Replaced. Take 2 old layers off and install new one with needed replacement wood as needed. Also made arrangements to have old wooden patio torn down and disposed of. (Done by another company that did our alumawood patio replacement).

I don't feel disappointed with the pricing. They just really need to make sure that the work that they want to have done is all in the contract. They really need to check when the workers were done and how the work appears. It's going to take several days. I need to check every single day what's going on because there's supposed to be the tightening up but they made it like leaving loose shingles playing around on the roof. I felt like I had to keep after them to keep them at par. They have a really good form end up. The form was not here when they were doing the work. The roof work was done. I felt satisfied with the way things are done.

Description of Work
I used A & E Roofing.

Description of Work
Arrived on time. Inspected my roof. Gave me advice on caring for my tile roof. Measured my roof for the repair estimate.

He wanted to charge me extra money to fix the 6 tiles that were broken. He said then he would show up the following day. He continued to put off the service. He did finally show up after I called him several times but I am not satisfied with the work. The tiles that he worked on were not straight, they were crooked. I requested that he make them straight and he refused but eventually he did do it. I feel like he tried to take advantage of me.

There were no additional charges beyond the big deal amount. At that time I couldn't afford it. But, hopefully, I will follow up and have that done with them because they seem pretty honest and reliable. He was here right when he said he would be. He cleaned up after himself.

Description of Work
He inspected the roof and repaired anything that was simple and that he could do by himself. He wrote a proposal later for things that were larger and which he felt that I should call the company back on.

The person came on time and did the inspection. He sealed around the roof vents Said he found something wrong with the flat root. I indicated that the roof had been modified so that the water would drain. He said they would submit a proposal and estimate for repair. That was the last I heard from the company. I have not approached them again.

Bought a "Big Deal" from Angies list and never received a response to my scheduling request. Forgot about it and called months later and the owner told me his guy was sick. He said he would have him call me. this is February 2015.....no one has called. I called today, 2/18/15 to be told that they cancelled their relationship with Angies in SEPTEMBER 2014. Why is Angies selling Big Deals to companies who have terminated the relationship? I have a request in for a refund. We shall see how that goes.

Everything went really well. They not only did a great job with the tune up, but they even rectified some mistakes made by a previous roofer. Additionally, there was always someone present to explain the work that was being done as well as address any concerns, and they did a nice job of cleaning up after themselves.

Description of Work
They performed a roof tune up as part of a deal that we had purchased.

They got out within two days of call to assess project and on the job a week later. Crew was great, adhered to all HOA rules and completed job in a timely manner. We had one small issue with some mismatched tiles and a spot was missed that required concrete repair. They had crew back out the next day and completed the job to spec. Great communication and a pleasure to work with.

He was courteous, professional and punctual. Fixed all cracked tiles. Gave me an estimate for thorough roof fix. I'm waiting to save money to go for it. I will consider A & E ROOFING when gathering bids.

Appointment set up promptly for 9/02/14. Jack was on time, friendly, helpful, took pictures etc. He told me that I would get the pictures and the quotation for roof cleaning etc. within two days. It is now three months later and despite repeated emails etc., I still don't have the pictures or a readable quote. The last time that I heard from him (over a month ago), he claimed that he couldn't find the pictures but had found a flash drive with pictures on it and he would try that. I did get a contract from him about a month before that, however, Page 2 which is the part that outlines work they would like to do is complete gibberish and unreadable. He couldn't even send me a decent contract, much less the pictures. Considering how much they have been running this Angie's Deal, I think that A & E's business isn't doing well and all they care about is doing the deal and not getting any business afterward....which is strange. The only reason that I didn't rate this company with an F is because he was prompt to come, and seemed knowledgeable and helpful while here.

Description of Work
Angie's Deal to inspect tile roof. They were supposed to fix some slipped tiles, take pictures, send me the pictures with a quote for services that needed to be performed

they did a great job,on time and very professional i would use them again

he was fast and professional quality work.

I purchased a BIG DEAL that included inspection and some replacement and repairs. First appointment that was made, the provider forgot about it. The second appointment, the provider showed up but because it was windy could not complete. They told me they would email with an estimate, never did.

Service was performed and evaluation of roof given

I purchased a Deal with them and set an appointment. They did not show up or call to cancel. I called them and rescheduled, and they did the same thing again.

TERRIBLE, read what he did section

Description of Work
Jack Lavin stayed up on my roof for about 2 hours looking, taking pictures and said he had to discuss with his boss and send me the quote as he was NOT familiar with the product that was used underlying the tiles. Since then, he has given me the run around and never called, reply to my email nor text until today 11/10th after numerous attempt. His answer was they can't fix my stains on the eves. his boss said they have to bid HIGH and LOW, which I'm not sure what that means as he still didn't give me the reason for the staining. He clearly can't handle the work load from Angies list as he said he is the only one from this company that handles the bids, repairs, etc from the referrals. Obvsiouly he is unorganized as he was late to arrive for our initial appointment and they don't use the materials that is on my roof sounds fishy. I would NEVER recommend this company.

It took him 2 weeks to finally come to my home. He told me I had 15 cracked tiles and he had to charge $16,000.00 to repair this. My roof was inspected 11 months ago and it pasted inspection so this was not true. When I told him $16,000 was out of the question and I think he did some damage on my roof. He also left a note on my roof saying I had torn tarp under the tiles. I felt he was trying to sabotage my roof

I have one cracked tile on my roof that is visible from the entrance. I also have a home owners association that is threatening to fine me due to this issue. I have called and called and called 2 or 3 times we have spoken and he says the issue will be taken care of. I have yet to see anyone come fix the issue or even set an appointment. I will remove this review if the provider would just finish the work and notify me of the service completion.

Description of Work
I purchased a big deal for the provider for $149 for roof tune up.

I am not satisfied at all. They just didn't show up on the first appointment....after MANY calls and emails I finally got a new appointment, it was like pulling teeth. They said one of the people was sick, ok, but you can call and let me know you won't be coming and reschedule.....All the effort was on my part. FINALLY they came, and as I said spent 15 minutes taking pictures and looking around. They left saying that we would hear from them. NO repairs were done, there has been NO new information even though I emailed to ask what was going on. I spent almost $100 for someone to say my roof has problems....I KNEW that....Not at ALL satisfied. This was a complete waste of time and money. I would NEVER use this company. :(

Description of Work
Nothing really, I signed up for the special where they were supposed to look at the roof, seal exposed nails and around any pipes coming through the roof. They came, looked around for 15 minutes, took some pictures and left.

Had trouble getting the provider to scheduled

Did a great job and took care of everything on time.

Description of Work
Had to replace 1/2 roof.

Locally owned and operated. Prompt. Punctual. Professional. Let us take the work out of Lawn and Yard Work so you can enjoy a perfectly manicured lawn. Call us and take advantage of your Member Discount!!  …

How is A & E ROOFING overall rated?

What days are A & E ROOFING open?

What payment options does A & E ROOFING provide

Does A & E ROOFING offer a senior discount?

No, A & E ROOFING does not offer a senior discount.

Are warranties offered by A & E ROOFING?

What services does A & E ROOFING offer?

Are there any services A & E ROOFING does not offer?