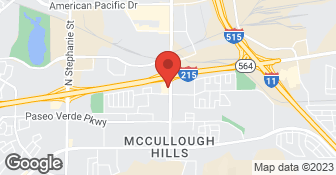 I felt misled from the beginning. The plumber that arrived was Joseph Dolmant, and he said originally it would $92 total to replace it, including the $29.95. He was here totally for 45 minutes, and ended charging us $155.00. The total of the work was to put in a 3 foot piece of plastic, considered the air gap in kitchen sink. I was overcharged at least 35 dollars, and I will never call him again. He was a con man throughout the entire, often using double-talk and changing his price.

Description of Work
The hose attached to the sprayer in our sink (which extends and is used to rinse off dishes) had come loose, so called this company to have it fixed. Over the phone they said it would be $29.95 for the visit.

I am going to say that A-1 probably could have done a better job with this. Things were still leaking after he was supposedly done. I was not very pleased. He told me he could not fix the box without the pipes being fixed. He did fix the box but not the pipes. I had to call someone else in. I would not say he was the worst but not good enough to have back. I do not think that I would give him a below average grade, I just feel he was average and could of improved a little better.

Description of Work
A1 replaced the sprinkler box and a leaking valve outside of my four bedroom home.

They wanted $80 to cover the valve. I was told by another plumber that it only required a 25 cent handle.

Description of Work
Came to fix valve on toilet.

A 1 Action Plumbing & Rooter did an okay job, but did not complete the job in a timely fashion. He was a very nice young man. He explained everything to me in detail and told me exactly what was wrong and what needed fixed.

Description of Work
They replaced our toilet, fixed the drain in our bathtub, and fixed the pipes for our water heater.

A 1 Action Plumbing & Rooter caused more problems after installing the valve. The apprentice did all the work while the master plumber just sat around. They flooded my yard and messed up my water pipes. I strongly feel that my water problems started when they put the valve on that was not good quality.

Description of Work
They put in new valves in our water system. They also fixed our toilet and shower.

A-1 Action Plumbing has very courteous and polite people working for them. They also showed up right on time and didn't take long to unplug our toilet. I really liked that they had told us about a water problem that we had by a door way. We were completely satisfied with the service that they provided us. I can't remember the exact cost of their service.

Description of Work
They unplugged our toilet; we were having problems with it.

A 1 Action Plumbing & Rooter were very prompt at getting here and fixing the problem. I called and advised them of the problem and told them they did not have to come out that same day, but they came right out. They got the problem fixed and I have not had any problems since they were here. I would recommend their services to others.

Description of Work
They unclogged one of our toilets in our home.

When we called, A-1 returned our phone call quickly and sent someone out promptly. He said that the punch out had not been installed properly, and corrected the problem right away. This was under warranty. It cost us nothing.

Description of Work
A-1 came to repair our garbage disposal in the kitchen sink.

A-1 Action Plumbing is professional and knowledgeable plumbers who I have used for many years. We are always pleased with their excellent service work. They replaced the flappers in all three of our toilets a few months ago and the plumber who arrived was very friendly even to our animals. The company does excellent work, cleans up after themselves and we are pleased with there reasonable prices.

Description of Work
A-1 Action Plumbing & Rooter was out to replace the flappers in three of my bathroom toilets recently.

Established in 2013, Pure Plumbing has quickly earned a reputation as one of the most trusted plumbing companies in Las Vegas. The family-run business offers a wide range of high-quality plumbing services at reasonable prices for residential and commercial customers. With expert plumbers on their team, Pure Plumbing can tackle any size or scope of plumbing work, from general plumbing repairs and installations to complex jobs such as water and sewer line replacement. Dedicated to building long-term relationships with customers, the company’s team is always willing to go the extra mile to ensure customer satisfaction. Additionally, Pure Plumbing uses only state-of-the-art equipment and environmentally friendly practices. Contact their office today to schedule an appointment or for any emergency services.  …

Max Plumbing is proud to be a local owner operated business serving Las Vegas, Clark County and the surrounding community. With years of experience and unmatched expertise, we can help you with any of your plumbing needs. Our employees are highly trained and committed to providing the highest levels of quality available. Since opening our doors, our goal has been to provide our customers with the highest quality plumbing service and products at a fair price. We take great pride in the reputation that we have built throughout the community. This has been done by being reliable, tidy and making sure that every customer is 100% satisfied when we are done with their plumbing job. Big or small, we do it all! Get in touch today!  …

A Campagna Company, LLC "DBA ACC PLUMBING" is a full service plumbing company with new construction and service divisions. We are experienced in commercial and residential projects including but not limited to warehouse/office space, medical facilities, bars/restaurants, educational facilities/institutions, and large custom homes. We have earned a reputation for being a “high-quality” and “on-time” subcontractor in a highly competitive field, with extensive experience in design-build projects. Additional email- service@accplumbing.com  …

How is A 1 ACTION PLUMBING & ROOTER overall rated?

A 1 ACTION PLUMBING & ROOTER is currently rated 3.4 overall out of 5.

No, A 1 ACTION PLUMBING & ROOTER does not offer eco-friendly accreditations.