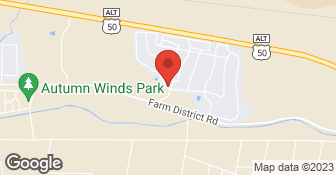 Hi folks, I've been away from Angie's since 2017 and it's good to be back. I offer a licensed handyman service fully compliant with the rules and regulations governing the licensing of handymen in the state of Nevada. I am an 8 time Super Service Award winner in 2012, 2013, and 2016 in multiple categories. We have the capability of doing almost anything you need done. I currently have other licensed individuals working with me. We do not employ subcontractors as we're able to do the work ourselves. I charge $90 per man hr. with a 2 hr. min. I make the initial customer visit personally to determine who'll be dispatched and what tools and materials they'll need. I do not charge for this initial visit and it gives me a chance to meet the customer and let them get to know me. I stand behind all my workmen and my name's on all work done. I'm licensed in the state, county and various cities as required (numbers available upon request). I offer a new customer 5% discount to Angie's List members. More than 500 company reviews may be found on Google, Yelp, my website, alan-topnotch.com, and Porch.com. Thank You for your consideration...A.J.Lynch................ Member of the Association of Certified Handyman Professionals and certified Full Service Professional with Handyman Association of America.

30 years of cabinet and furniture making. Using the best raw materials available to us to bring you the best piece or cabinetry for your project. We have the experience and dedication to bring your dreams to reality! Specializing in Cabinet and Furniture Making Services, we guarantee your satisfaction, and we won’t leave until the job is done right. We pride ourselves on the quality work we provide, while delivering great customer service! Call or click to schedule a free estimate today! Visit our website: mountainvalleymillworks.com

CTR Roofing LTD. is committed to providing the best roofing service possible at the best price. Whether you need an inspection, repairs, or a new roof we can provide many options that fit your need, budget, and schedule. With over 20 years of experience we stand by our work and strive to provide the best customer service.

Very pleased with quality-minor problems encountered were addressed and corrected (company installing shower door broke first one) mike did exactly what we wanted.

It was wonderful. I wouldn't hire another contractor besides Mike. He does exceptional work.

DESCRIPTION OF WORK
He built an RV garage in the fall of 2014.

Requested a visit and a quote for a fairly small change. After two weeks and a couple of follow up still no quote. Just wasted my time since I was waiting on him. At some point responded he's busy with other things and then I told him since I waited for so long I'll give him a bit more time to respond. No response so far and it's been 3 weeks.

I do want to say though that both Mike and Suzanne from KASM construction were very professional and I would use them in the future if needed..

DESCRIPTION OF WORK
Mike came to my house and we discussed the project. Unfortunately, the structural engineer's plans I had were outdated and it would have been too expensive to update them. Also, he was very busy and could not start the project for a while. I gave the job to another contractor who could draw up his own plans and do the job sooner.