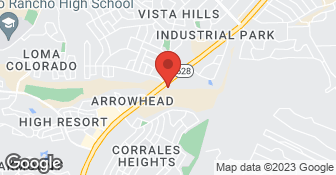 Excellent. I made one call to Pat, the owner of Cas Di Ferro and he sent his workers out an hour later to fix my gates. And they did it for free. This is a great place to shop for iron gates for entryways or driveways. If you are looking for honest prices and good work this is the place to go.

Description of Work
Realign my gates

Description of Work
Never got a response from this company

Description of Work
Never called back after trying to schedule a measurement.

Description of Work
Attempted to contact Casa Di Ferro multiple times on the phone to get them to come give me a quote. They have a good reputation and a ad in the Angie's List magazines we get.

It was good work, they were punctual, friendly, I thought the price was good and the work was done well, will use them again.

Description of Work
Repaired some locks on our wrought iron doors.

We are very satisfied with their work. They did an excellent job, in fact the they even added a few extras at no extra charge. Very professional, on time, excellent quality, excellent service. I highly recommend Caasa Di Fierro.

I was very pleased with the service. Someone came out as agreed, measured the openings for the gates, and showed me several design options. I chose the ones I liked, as well as the design of some inserts to replace rotten wooden inserts in the front courtyard wall.. A few weeks later, the gates were ready for painting. I bought the rust-proof paint and dropped it off at Case di Ferro. Once the paint had dried, workers showed up at my house to install the new gates and inserts. This process was completed efficiently and the old gates hauled away. I am very pleased with the final results. I definitely recommend Casa di Ferro for iron works.

Description of Work
I had three warped and broken wooden gates replaced with three wrought-iron gates.

Went well, they. They could call and update on status of fabrication and estimated installation. W as happy with product.

We wanted to get a screen door for French doors to the outside and a gate for the back of the house. A scroll screen of the same size cost nearly as much as the iron French doors with screen, which also provided additional security. We decided on the design of the French doors and the gate with the help of Peter who worked with us to choose the designs and styles of the doors and gate. Miles came out to the house and made the measurements, the doors and gate were made and painted within about 2 weeks, and they were installed by Miles and a colleague. The work was carefully done, Miles made sure everything fit properly and that scratches were sanded and repainted after installation. They look great and also have locks. We are very satisfied and highly recommend CASA DI FERRO.

I was unimpressed by the lack of organization and communication; employees not arriving at my house at a pre-arranged time, and the high estimate. The employees at this company did not seem very eager to get this job.

Description of Work
I asked for an estimate for repair to some wrought iron railing that had been made by another company. I never had any work done by this company.

Customer is correct, We were asked to repair and complete work from another company. We do this all the time, unfortunately sometimes it does cost more to repair then it does to replace. I do apologize for not meeting with you at the stated time.
5.0

Excellent service from start to finish! The day I called for an estimate, Casa di Ferro had workmen out measuring our existing gate and the wall where it would be installed. I got a verbal estimate the next day and agreed to it. As mentioned above, after calling Casa di Ferro back, we realized we could get a solid gate with a decorative scene on it for almost the same money so we did that. Due to the amount of other projects they had to do, we were told it would take about 2 weeks to get our gate finished, which was fine with us. Just before we were expecting our gate, Nick from Casa di Ferro called and asked if instead of a solid gate, they could open up the top area of the gate somewhat. I agreed as long as no one could get into our yard through the gate and our dogs couldn't get out. Today Miles and another employee came out to install our gate and I was THRILLED that I'd agreed to allow them to open up the top of the gate. It is absolutely beautiful and much nicer looking than the original balloon scene we'd ordered. Thank you very much to the entire Casa di Ferro team! Our gate is now a beautiful piece of functional art and the envy of our neighborhood! Not only will we use your company again, we will recommend you far and wide!

Description of Work
We ordered a gate for our side yard to replace the short gate that came with the house. We originally thought we'd just get a regular gate with the pickets or whatever they are called to hold down the cost. After speaking with Nick in Casa di Ferro's office, we realized we could get a decorative gate with a balloon scene on it for nearly the same cost, so we chose that.

Peter measured our door for dimensions of a security/screen door. He manufactured a custom steel door and painted it with paint that we provided. They installed the door within the time specified.

Overall, it was great. There were no problems at all. They were reasonable on the price.

Description of Work
Casa Di Ferro came out a couple of weeks ago and did some wrought iron work.

They expect the homeowner to prep the door frame or gate opening. Be sure to ask questions about what they provide versus what you the purchaser need to provide. This company provides doors but is not full service as far as finishing the frame, etc. The quality of the door and gate is the best I have found in Albuquerque.

Description of Work
I have had them install metal, south-facing doors to the house and two, metal, security gates for the backyard and pool.

see above. We were very impressed with this business from start to finish and intend to use them again for further security upgrades.

Description of Work
Company installed two custom-made security doors on our property. this involved two site visits for measuring and two more for installation. The installed products were greatly superior to what is off-the-shelf commercially available. The staff was throughly professional, both in the taking of measurements and in the installation. There were no mistakes, call-backs, or any other problems.

The owner is very good. I was impressed with the company. They did great custom work. My door is about an inch and a half thick with frosted glass. My electrical bill has been reduced.

Description of Work
They came out to the house and replaced 3 doors with customer metals door.

Shawn's Chimney Sweeps & Stove Company LLC , was established September 15, 1984 in Santa Fe, NM and has been in service all these years with one original owner. SCS&STOVECO LLC, has served in the industry of chimney cleaning , inspections I II III for homeowners, realtors, contractors, Architects and all New Mexican’s residing in our great state. SCS is the authorized dealer for all Osburn Wood, Pellet stoves and inserts , American Hearth DV gas fireplaces, Majestic DV gas inserts, Napoleon products, and a complete line of Caps, standard/Custom sizes, Dampers, all types, screens, accessories of all types, depending on your needs. SCS is skilled in scanning your flues, prefabs,stove pipes, dryer vents and air duct systems. SCS uses the newest ,SNAPLOK Rotary Chimney System , making it easy and quick to aid realtors serve their clients easily and efficiently providing professional results and utilize the FERRET sweeps smart tool.smart choice camera for dryer vents and difficult places that need a camera to diagnose the venting system in question. SCS&STOVECO specializes in the restoration , installation and relining of fireplaces, wood, gas, pellet, prefab changeouts, chase covers, design and consulting.  …

We have been securing Albuquerque and surrounding area families since 1968. Don Best was born and raised in Albuquerque and Barnett Aldon is locally owned and operated. We provide top quality ornamental iron products for homeowners and businesses that are looking for value and not just the lowest price. We offer custom design and fabrication of Security Storm Doors, Security Screen Doors, Patio Door Gates, Fencing, Railings, Pedestrian and Driveway Gates with Operators and Access Controls, and more! If you are looking for the finest quality ironwork at great prices, look no further.  …

CASA DI FERRO is currently rated 4.6 overall out of 5.

No, CASA DI FERRO does not offer eco-friendly accreditations.

No, CASA DI FERRO does not offer a senior discount.